The streaming giant has raced to establish itself as a hub for comedy on-demand, with a host of American comedians recording their shows for the site – and, in some cases, also starring in its original TV shows. Indeed, Aziz Ansari has now made Master of None for the site, while Chelsea Handler has recently premiered her own documentary series.

So far, though, Jimmy Carr has been the only Brit to ink a deal with Netflix, with the comic skipping his usual Christmas DVD release in favour of the subscription site. That is, until now: Chortle reports that Frankie Boyle has become the second Brit to head to Netflix, after recording his current tour (Hurt Like YOu’ve Never Been Loved) at Glasgow’s Citizens Theatre in September.

Boyle and Carr are both signed with Chambers Management, which suggests that other comedians on their books, such as Sarah Millican, might also opt for SVOD instead of DVD releases in the future.

Frankie, meanwhile, is no stranger to the streaming world: he has recorded two exclusives for BBC iPlayer, including one show discussing the Scottish Referendum and another dissecting the General Election, featuring Sara Pascoe and Katherine Ryan.

The news follows Netflix’s unveiling of its original stand-up slate for 2016, including Carr’s special.

Here is what’s on the way to Netflix territories around the world:

Coming in hot after a sold out national theater stand-up tour, his own TV series, and a successful run on Broad City, Hannibal Buress offers his personal brand of sharp observational comedy to a packed audience at the Varsity Theater in Minneapolis.

Known for always saying the unexpected and telling it like it is, even at the expense of offending people, Louisiana comedian Theo Von returns home to film his first stand-up comedy special for Netflix at the Civic Theater in New Orleans.

The first British comedian to make an original stand-up special for Netflix, Carr unleashes his distinctive comedy and wickedly funny one-liners to a sold out audience at the UK’s Hammersmith Apollo.

Patton Oswalt delivers a fresh hour (and more) of brand-new stand-up that covers everything from misery to defeat to hopelessness. It’s his most upbeat special to date. 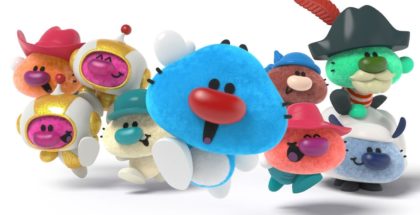