All of the Star Trek series just landed on Netflix UK | VODzilla.co | Where to watch online in UK

All of the Star Trek series just landed on Netflix UK

All of the Star Trek series just arrived on Netflix UK. This is not a drill.

Every month, Netflix likes to keep a surprise in store for subscribers. Earlier this week, that surprise was unveiled: the release of all seven seasons of Gilmore Girls on Friday 1st July. Now, though, it has followed that surprise with another: the return of Star Trek: The Next Generation to its streaming library. Along with all of Star Trek’s other small-screen incarnations.

The Next Generation was previously available to stream on Netflix UK, but was removed at the start of last year, leaving Trekkies with nowhere to get their binge-view fix. The newly expanded array of Star Trek TV shows, though, is more than compensation enough for the months we spent pining for Commander Riker – not least because in the US, the SVOD rights to Star Trek have been locked down tightly by CBS, as the network prepares to launch 2017’s rebooted Star Trek series on its own streaming platform, CBS All Access.

What does that mean for the 2017 Star Trek series’ broadcast in the UK? There is still no official word from anyone on this side of the Atlantic, but it is clear that Netflix have been talking to CBS on some level about Starfleet, which could put the streaming giant in the mix for the new show. Indeed, Netflix UK already has the rights to CBS’ Reign in the UK, while CBS and Netflix recently signed an international deal for the second-run rights to The Zoo.

But we digress. Now available on Netflix UK are…

The original, but not necessarily the best, Star Trek sees the inimitable William Shatner lead the crew of the Starship Enterprise as Captain Kirk, boldly going into the far reaches of space to explore new worlds and civilisations. And, most of the time, have sex with them.

Star Trek: The Next Generation

How do you follow Shatner? Get Patrick Stewart in to play Captain Jean-Luc Picard, who leads a new Enterprise on missions to explore unknown worlds decades after Kirk and his crew. Tune in for Brent Spiner’s Data and Michael Dorn’s Worf – stay for Jonathan Frakes’ swoonsome Commander Riker.

The starship Enterprise takes on new adventures in this colorful cartoon series featuring the voices of the original Star Trek cast, including William Shatner as Kirk, Leonard Nimoy as Spock, George Takei as Sulu and DeForest Kelley as McCoy.

The overlooked Star Trek series, Voyager saw a women take the helm of the titular ship, as it embarked on a 75-year journey back to Earth. Kate Mulgrew, now known to Netflix users as Red from Orange Is the New Black, plays Captain Janeway, with Robert Picardo playing the Data-like Doctor (called The Doctor) and Ethan Phillips as everyone’s favourite multi-coloured alien chef, Neelix.

In this Star Trek spin-off, Commander Sisko leads the multi-species crew of Deep Space Nine, a Federation space station with a complex mission.

Captain Archer and his crew explore space and discover human innovation-expanding technologies as they meet new alien races in this 2001 prequel. Known as the Star Trek that introduced zips to its uniforms, that, unfortunately, was probably the most interesting thing about it.

In short, pretty much all the Star Trek is now available to stream. Be right back, we’ll see you in a few months. 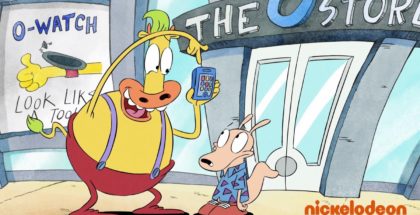 Godzilla: City on the Edge of Battle stomps onto Netflix this July... July 8, 2018 | Staff Reporter