VOD film review: Evolution (2015) | Where to watch online in UK | How to stream legally | VODzilla.co

A surreal fairy-tale nightmare that plays on coming-of-age fears, augmented by jaw-dropping imagery and a smattering of body-horror.

You don’t have to have seen writer-director Lucile Hadzihalilovic’s 2005 debut feature Innocence to understand and appreciate Evolution (only her second feature), but it certainly helps. Stylistically and thematically, both films could be considered companion pieces, since Innocence explored strange coming-of-age rituals for a group of girls (all attending a mysterious school that seemed to be grooming them for adulthood), while Evolution performs the same function for boys, only with a much darker fantasy element.

Set in an unnamed time period (though it closely resembles the 1950s), the film takes place on a remote, rural island that’s inhabited only by pale-skinned mother figures and their 10-year-old boys. When young Nicolas (Brebant) thinks he sees a dead boy in the coral where he swims with his friends, he becomes increasingly disturbed and begins to mistrust his mother (Parmentier), who injects him every night with a suspiciously glowing goop she calls medicine.

One night, Nicolas manages to avoid taking his medicine and follows his mother down to the coral at night, where he witnesses her take part in a bizarre aquatic ritual. Later, Nicolas strikes up a friendship with a young nurse (Duran) he meets at the local community hospital, but can he trust her with what he has seen? And what exactly is the hospital hiding?

Visually, the film is simply extraordinary, with simple juxtapositions (a sea creature crawling across pale skin, a blood-red starfish where a starfish shouldn’t be) creating haunting, memorable images that will stay with you long after the film ends. Aided by Laia Colet’s gorgeous production design (all marine blues and dark greens with dashes of bright red) and Manu Dacosse’s exceptional cinematography (both on land and underwater), Hadzihalilovic creates an intoxicating, almost suffocating atmosphere, the dream-like nature of which is heightened by the fact that there’s very little dialogue.

It would be churlish to give away too many details of what exactly is going on in this bizarre, possibly alternate world, but suffice it to say that Hadzihalilovic indulges in some impressive, arthouse-friendly body horror that’s more than deserving of the inevitable Cronenberg comparison. Cleverly, the film holds off on verbalising the details, leaving the audience to fill in the gaps for themselves, to pleasingly chilling effect.

Thematically, Evolution explores fears of growing up, of sexuality, of childbirth, and of inevitable adulthood, but it mixes that together with an all-pervasive aquatic origin that gives it a strange, fairy-tale quality. (It is perhaps no coincidence that, in French, the word for mother and the word for sea are homonyms).

Haunting and beautiful, this is a stunningly directed and pleasingly dark coming-of-ager that exerts a powerful grip. It’s also one of the best films of the year.

Where can I buy or rent Evolution online in the UK?

All of the Star Trek series just landed on Netflix UK 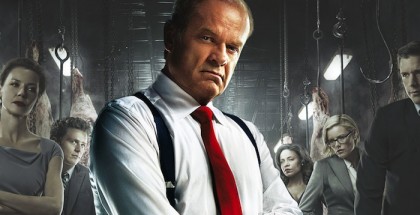