What's coming soon to Netflix UK in January 2021? | Where to watch online in UK | How to stream legally | When it is available on digital | VODzilla.co

As we finally bid farewell to 2020, Netflix is getting the new year off to a promising start, bringing forward the debut of Cobra Kai Season 3 to New Year’s Day.

Other Netflix original series returning include Disenchantment, Carmen Sandiego and Jurassic Park: Camp Cretaceous, while debuts range from French thriller Lupin to the US version of Channel 4’s The Circle.

Netflix isn’t skimping on the film front either, with awards contender Pieces of a Woman starring Vanessa Kirby and sci-fi actioner Outside the Wire, starring Anthony Mackie, as well as The Dig, starring Ralph Fiennes and Carey Mulligan. And, to top it off, there’s our fifth visit to Riverdale and the second voyage of Snowpiercer, arriving hot on the heels of their US broadcasts.

Not sure how to sum all of that up in a four-letter word? Fortunately, Nic Cage will also be on hand to teach you a History of Swear Words. Yes, really.

The unlikely hit sequel to The Karate Kid returns, taking place 30 years after the events of the 1984 All Valley Karate Tournament with the continuation of the inescapable conflict between Daniel LaRusso (Ralph Macchio) and Johnny Lawrence (William Zabka). Season 3 sees everyone reeling in the aftermath of the violent high school brawl between their dojos, which has left Miguel in a precarious condition. While Daniel searches for answers in his past and Johnny seeks redemption, Kreese further manipulates his vulnerable students with his own vision of dominance. The soul of the Valley is at stake, and the fate of every student and sensei hangs in the balance.

They’ve built a movement out of minimalism. Longtime friends Joshua Fields Millburn and Ryan Nicodemus share how our lives can be better with less.

Headspace takes a friendly, animated look at the benefits of meditation while offering techniques and guided meditations to jump-start the new year.

In a catastrophic future, the remaining population is crowded into megacities, where all-powerful and ultraviolent cops keep the peace.

The US incarnation of Channel 4’s hit reality series.

When the brakes slam on his wedding, Roy accepts a challenge from a new foe to race for his runaway bride at the iconic Nürburgring track in Germany.

This moving BBC drama follows Miri Matteson as she returns home after 18 years in prison. Can she integrate back into her old life?


This six-part series will feature Nic Cage alongside linguists and cognitive scientists, plus celebrity guests including London Hughes, Jim Jefferies, Nick Offerman, Sarah Silverman and Isiah Whitlock Jr. Produced by Funny or Die and Industrial Media’s B17 Entertainment, with Bellamie Blackstone on board as showrunner, it aims to explain the history and impact of some of the most notorious bad words in the English language.

Cute cats, quirky crafts and colorful magic! Join kitty enthusiast Gabby and her sidekick Pandy Paws as they team up for a series of animated adventures.

What happens after we die? This docuseries explores personal stories and research on near-death experiences, reincarnation and paranormal phenomena.

This film examines the background and career of Tony Parker, whose determination led him to become arguably the greatest French basketball player.

Pieces of a Woman – 7th January


Martha (Vanessa Kirby) and Sean (Shia LaBeouf) are a Boston couple on the verge of parenthood whose lives change irrevocably when a home birth ends in unimaginable tragedy. Thus begins a yearlong odyssey for Martha, who must navigate her grief while working through fractious relationships with Sean and her domineering mother (Ellen Burstyn), along with the publicly vilified midwife (Molly Parker), whom she must face in court.


Inspired by the adventures of Arsène Lupin, gentleman thief Assane Diop sets out to avenge his father for an injustice inflicted by a wealthy family.

Entrenched in a midlife crisis, Aziz seeks solace from his mundane job, lonesome friends and rowdy family while pretending to have his act together.

Netfix’s documentary series returns to give us a look at life behind bars.

Wander the New York City streets and fascinating mind of wry writer, humorist and raconteur Fran Lebowitz as she sits down with Martin Scorsese.

A boy suddenly orphaned fights his parents’ killer to save a planet, and discovers a new world of danger — and wonder – in this new anime.

A cheap, powerful drug emerges during a recession, igniting a moral panic fuelled by racism. Netflix’s new documentary explores the complex history of crack in the 1980s.

Night Stalker: The Hunt for a Serial Killer – 13th January

Beneath the sunlit glamour of 1985 LA lurks a relentlessly evil serial killer.

Coping with heartbreak, the shy owner of a floundering cafe finds solace in the Javanese love songs of Didi Kempot.

Outside the Wire – 15th January

Set in the future, this sci-fi thriller follows a drone pilot sent into a deadly militarised zone where he finds himself working for an android officer (Anthony Mackie) tasked to locate a doomsday device before the insurgents do. It is written by Rob Yescombe and Rowan Athale and directed by Mikael Håfström (Escape Plan, 1408, Evil).

Follow LA’s wildly wealthy Asian and Asian American fun seekers as they go all out with fabulous parties, glamour and drama in this reality series

While her mom is away, a teen sneaks out of the hippie commune where she lives and embarks on a life-changing adventure.

The CW’s teen drama returns for a fifth outing, which begin with its characters’ final days as students at Riverdale High.

This French comedy about a talent agency is uproariously funny, thanks to its amusing array of characters, sharply written dialogue and rapid pacing. Celebrity cameos by everyone from Juliette Binoche to Isabelle Huppert are a bonus.


Fate: The Winx Saga follows the coming-of-age journey of five fairies attending Alfea, a magical boarding school in the Otherworld where they must learn to master their magical powers while navigating love, rivalries, and the monsters that threaten their very existence.


99 Homes helmer Ramin Bahrani is writing and directing this adaptation of the New York Times bestseller and 2008 Man Booker Prize-winning novel, written by Aravind Adiga. The film tells the epic journey of a poor Indian driver (Adarsh Gourav) who uses his wit and cunning to break free from servitude to his rich masters (Rajkummar Rao and Priyanka Chopra Jonas) and rise to the top of the heap. Murder, love and deceit become the ultimate price for ambition.

My Grandma’s a Lesbian – 22nd January

Two women in their 70s decide to come out to their families and get married, sparking chaos â€” and threatening a granddaughter’s engagement.

Set within the same timeline as the Jurassic World film franchise, the animated series follows a group of six teenagers chosen for a once-in-a-lifetime experience at a new adventure camp on the opposite side of the familiar island. But when dinosaurs wreak havoc across the island, the campers are stranded. Unable to reach the outside world, they’ll need to go from strangers to friends to family if they’re going to survive. Season 2 picks up as the stranded campers struggle to survive on Isla Nublar, with the stakes getting higher and higher.

This entertaining, warm-hearted high school movie is one of 2019’s funniest films.

This sci-fi series, based on the 2013 movie by Bong Joon-ho, takes place seven years after the world has become a frozen wasteland, with all remaining life lives aboard the massive titular train. 1,001 cars long, the Snowpiercer circles the globe endlessly, divided into classes, with the rich elites up front and impoverished “tailies” in the back. Snowpiercer tells the story of what happens when those who have been oppressed their whole lives decide to resist, rise up and revolt.

As WWII looms, a wealthy widow (Carey Mulligan) hires an amateur archaeologist (Ralph Fiennes) to excavate the burial mounds on her estate. When they make a historic discovery, the echoes of Britain’s past resonate in the face of its uncertain future‎.

Proof that American remakes can be better than the original, this US take on the mockumentary is a sheer delight, thanks to Steve Carell’s hysterical yet oddly sympathetic portrayal of loser manager David Brent.

Other new releases coming soon to Netflix UK in January 2021:

3rd January
All Is True 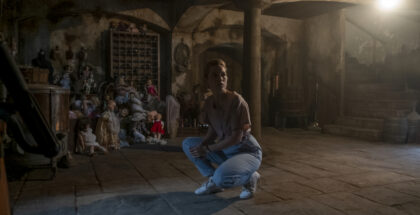