Why you should be watching BBC Three's Famalam | Where to watch online in UK | How to stream legally | When it is available on digital | VODzilla.co

Why you should be watching BBC Three’s Famalam

This review is based on Season 1 and 2 of Famalam.

From Fleabag to Jerk, BBC Three is knocking its comedy out of the park, but one of its greatest, and funniest, achievements to date has been resurrecting the sadly forgotten genre of the sketch show. How? By commissioning a group of hilariously talented comedians to team up and make Famalam, a dizzying mix of satire, spoof, silliness and superbly conceived characters.

With the show back on BBC iPlayer now for a third season (and with the first two still available to stream), we break down some of the many reasons why you should be watching.

Famalam, which takes its title from the slang word for close friends or family, has won deserving headlines for its Black-led cast – a welcome dose of diversity that makes this feel like an equally important companion to the landmark 90s series Goodness Gracious Me. But the cast, which comprises familiar and new faces – Gbemisola Ikumelo (now a BAFTA winner for Brain in Gear), Samson Kayo and John Macmillan, recognisable from Sunny D, Timewasters and Chewing Gum, are joined by Vivienne Acheampong (The Aliens), Roxanne Sternberg (Emerald City) and former Vine superstar Tom Moutchi – deserve even more headlines for their sheer comic talent, as they repeatedly turn their skits into side-splitting exercises in sharp wit, physical slapstick or verbal wordplay. They introduce us to such wonderfully realised people as Nigerian philanthropist Prince Alyusi (Kayo), whose emails never get a response from other countries, a Beyonce-esque woman whose derrière stuns a bus stop (Sternberg), and a whole host of extremely competitive mums (Ikumelo), whose constant one-upmanship gets bigger and bigger, leading to a massive disruption at a wedding in Season 2.

Sketch shows don’t just need strong one-liners; they need recurring characters we can sympathise with, loathe or at least recognise. Famalam’s strength lies in the daunting number of familiar characters it keeps bringing back, building up a formidable roster of well-rounded people who are easy to like, hate, and laugh at accordingly. There’s McMillian (who impressed in Carnage) as Professor Lofuko, Croydon’s leading witch doctor (a probable fraud yet a very practical advice-giver), or Moses Mountree, Kayo’s detective, who stars in a remake of Midsomer Murders that reimagines the show with a Black lead instead of a white, middle-aged man. The result is somewhere between DCI Barnaby and Shaft, a laugh-out-loud, hugely inappropriate sleuth, whose womanising, insulting ways attract internal investigation from Line of Duty’s AC-12, win over all the OAPs in the area and doesn’t hesitate to seek justice in the worst way possible.

Midsomer Motherf*cking Murders is just one of the countless examples of how well written Famalam is, as the show takes aim at precise targets, often several at once, and rarely fails to skewer them. From angry hooligans shouting outraged abuse at theatre performers to a woke version of Barry White, or a former rapper trying to make it in a 9-to-5 office, it’s all rooted in shrewd observations of our society, and specifically society’s expectations of, and projections onto, people of colour.

A Women President character, who’s written by a team of all-male writers, is hysterically scathing of modern media, backed up by a spoof of The Hunger Games that calls out the Token Black Friend stereotype that still persists in Hollywood storytelling. On a more everyday note, there’s an amusingly awkward look at how to greet other people at work, equally grounded in relatable, recognisable experiences that are laser-targeted in their accuracy and universal in their accessible, infectious humour.

What makes Famalam such a joy to watch is that it never ceases to surprise. Each time we go back to a familiar character, they’re given a slight tweak, an additional layer or an unexpected rug-pull. By the time Moses Mountree is back for a sixth outing, he’s given a new partner from China, leading to a whole new array of racist stereotypes that raise even more questions about cultural representation. And every time we go back to Stratford, there’s a guaranteed revelation in store from the E17 crew, as they step up their beef with a rival gang by sending video messages on Snapchat – then step back down through a display of well-meaning encouragement and consideration. It’s a masterclass in escalating and undermining expectations, balanced by hugely entertaining one-liners and quick-fire gags, from discussing the courage of coming out to your friends to taking a gun safety course in Nuneaton. This back-and-forth routine is so good it won the E17 crew a sketch slot in a recent Comic Relief line-up, and even those two-minutes were solid gold.

Sketch shows are, by their very nature, hit and miss. Famalam has an astonishingly high hit rate, ranking it alongside the very best of the genre, such as Big Train and The Fast Show. Importantly, it also rivals the latter for pure pace, relentlessly hopping from skit to skit without pausing for breath, and with each episode only running for 22 minutes, the result is a non-stop string of laughter that’s easy to binge in one sitting – although we highly recommend not doing that, just to enjoy the gags for even longer.

Famalam Season 3 is available on BBC iPlayer until July 2021. Season 1 and 2 are available until the end of September 2020. 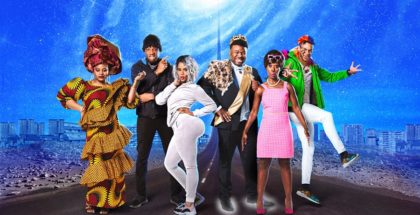