VOD film review: The Truth About Emanuel | VODzilla.co | Where to watch online in UK

It’s often telling when a movie changes its title. The Truth About Emanuel, out on VOD this week, was formerly known as Emanuel and the Truth About the Fishes, a distracting title that raised more questions than it answered. What was the truth about fishes? Do they have legs? The name implied some aquatic intrigue, but while the screen is often flooded with water, director Francesca Gregorini is more concerned with a different mystery altogether.

Emmanuel (Scodelario) is about to turn 18. A sullen teen, she blames herself for her mum’s death during childbirth and doesn’t get on with dad’s (an understated Alfred Molina) new girlfriend. But then Linda (Biel) moves in across the road – a woman who bears more than a passing resemblance to Emmanuel’s mother.

It’s only a matter of days until Emmanuel’s over at her period house, offering to babysit for Linda – only to discover something very… odd. And it’s not just that the baby has a terrifying face, seemingly fixed in the same freaky position for the entire runtime.

Gregorini’s fishy script paddles through a sea of loss, grief and freaky-faced babies with some interesting ideas, but never really reaches the other side. The performances help to keep it afloat; after impressing so much in Andrea Arnold’s Wuthering Heights, the blue-eyed Kaya Scodelario is fantastic as the unhinged lead, Biel keeps an impressively straight face throughout, and Hunky Dory’s wonderful Aneurin Barnard does a good job of standing by and looking confused by their bizarre relationship.

But you’re liable to do the same as the second half arrives, with a climax that defies logic and leaves you wondering why no one did anything sooner. It’s well shot by Gregorini, who makes Biel’s beautiful old building sing with character – and the odd appearance of piscis lends a surreal touch – but when an ending doesn’t quite satisfy and the characters don’t make sense, it’s hard to remain engaged. Even with its new, grounded moniker, The Truth About Emanuel is that it’s a bizarre, intriguing premise, which sadly ends up down the toilet bowl.

The Truth About Emanuel is available to watch online on Amazon Prime Video as part of a Prime membership or a £5.99 monthly subscription.

Where can I buy or rent The Truth About Emanuel online in the UK?

The IT Crowd, Peep Show and other Channel 4 shows back on Netflix UK 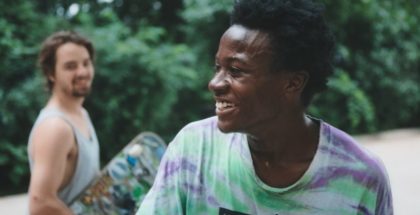