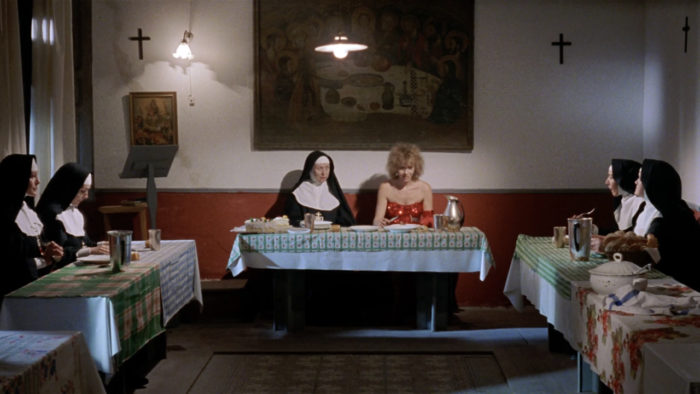 Pedro Almodóvar's entertaining third movie is a step away from farce and into more serious territory.

Released in 1984, Dark Habits is Almodóvar’s third film and – if the puntastic title wasn’t a big enough clue – it’s about nuns. An unconventional comedy about a group of subversive sisters? It’s perfect for Pedro, a firm believer in Luis Buñuel’s anti-religious commentary, but Dark Habits is less harsh than you might expect.

Yolanda (Labyrinth of Passion’s Cristina Sanchez Pascual) is a pop singer in thrall to hard substances. When her boyfriend overdoses, the cops come looking for her. So she pulls a Whoopi Goldberg and hides out in a convent.

But this is far from Sister Act: under the leadership of the oddball Mother Superior (Julieta Serrano), the nuns are encouraged to humble themselves to the point of humiliation. And so we’re introduced to a convent of nuns with Monty Python-esque names: Sister Damned (Carmen Maura), Sister Rat (Chus Lampreave) and Sister Manure (the hilarious Marisa Paredes).

Their penniless community is struggling to stay open, which is terrible news for the ruined souls to whom they offer refuge. Yolanda may be their only guest, but that’s just the way Mother Superior likes it.

Singing the bolero together, the Mother Superior and Yolanda carry out a love affair in secret, while the other nuns carry out equally questionable behaviour, involving cakes, pulp fiction novels and hidden clothing, as well as a pet tiger.

It all sounds like a typically silly Almodóvar farce, and it is, but much like What Have I Done to Deserve This?, the tone is closer to a serious melodrama than straight-out comedy. The humour is dark, but also notably restrained compared to the outrageousness of Labyrinth of Passion. Dark Habits, then, could be seen as a disappointing third outing for the Spanish director, perhaps because it was his first studio-financed film. But the nonsensical behaviour of the nuns in attempting to uphold their institution contained enough satire to make a point in post-Franco society. (The film was rejected by Cannes Film Festival for its sacrilegious content.)

At one point, Yolanda’s make-up produces a mock Shroud of Turin for the Mother Superior to treasure. “It is in imperfect creatures that God finds all his greatness,” she says solemnly.

Looking back now, Dark Habits is an interesting piece to consider. It’s a commentary on the structure of formal religion, and of the ability of Christians to be hypocrites, but it’s also a marked contrast to the bawdy urban humour of the Comedia Madrileña – proof that Almodóvar could produce more serious work after his vibrant, liberated first two movies.

Dark Habits is available on MUBI UK, as part of a £9.99 monthly subscription, until 17th September 2019.

Where can I buy or rent Dark Habits online in the UK?