Netflix UK TV review: Riverdale Season 1, Episodes 1 to 3 | Where to watch online in UK | How to stream legally | When it is available on digital | VODzilla.co

Self-aware and stuffed with style, Riverdale gets off to confident start, promising trashy fun and a catchy soundtrack.

Is it worth tuning in to Riverdale? We take a spoiler-free first look at the opening episodes of The CW’s new Archie series.

“Our story is about a town, a small town, and the people who live in the town. From a distance, it presents itself like so many other small towns all over the world: safe, decent, innocent. Get closer though, and you start seeing the shadows underneath.”

That’s how Riverdale introduces itself in The CW’s new adaptation of the Archie comics for the screen – arriving weekly on Netflix in the UK.

Archie comics date back decades in the comic book world, with the central characters of Archie Andrews, Betty Cooper and Veronica Lodge first appearing in 1941. Which means, of course, that many people in 2017 probably haven’t read them. Kids today may not have even heard of them. So, like the modern teens that Netflix UK will be hoping to court, as they prepare for the final season of Pretty Little Liars later this year, we’re going into Riverdale cold. The good news? It doesn’t take long for things to heat up.

That happens around 10 minutes in, as BFFs Archie (KJ Apa) and Betty (Lili Reinhart) hang out in the Riverdale cafe – and in walks Veronica (Camila Mendes). Slow-motion entry? Check. Steamy eye contact? Check. Jealous Betty? Double-check, with a milkshake on the side.

Yes, the show wastes no time in setting up a swift love triangle between our central trio, which is more than enough to sink your trashy telly teeth into – and that’s without mentioning the fact that the programme begins with a strange death. That would be Jake Blossom, who was out on Sweetwater River with his twin sister, Cheryl Blossom (Madelaine Petsch), before she dropped her glove, he dove in after it, and then accidentally drowned, his body washing up on shore later. At least, that’s what she says. Over the first three episodes, it soon becomes apparent that there’s more to the Blossoms’ tale than she’s letting on.

A Laura Palmer-like corpse? A town with hidden secrets? Some romantic drama? It’s easy to slot The CW’s new version of Archie somewhere in between Twin Peaks and Gossip Girl, but a glance at creator Roberto Aguirre-Sacasa’s CV reveals Glee and the 2013 Carrie remake among his former writing credits, which gives you a better idea of where the programme’s coming from. A few years ago, Roberto struck popularity with the comic strip Afterlife with Archie, leading him to becoming Archie Comics’ creative chief. It’s no surprise, then, that this incarnation is a fun blend of eerie weirdness, potential horror and cool kids being ultra-cool – the kind of surface sheen can that can be full of pop-culture references yet still tease at something sinister lurking unseen.

On first impressions, Riverdale seems like a case of style over substance. That’s no bad thing, given the style is to die for – a neon neo-noir that swings between bubblegum colours that pop, shadows that cling and haircuts that never move out of place. But look past the show’s attractive inspirations, acted out by an equally attractive cast, and there’s a deceptive depth to the whole thing that really is quite intriguing.

Take those pop culture references, which begin the moment Veronica swans in. “I’m Breakfast at Tiffany’s, but this place is strictly In Cold Blood,” she offers to Archie. It’s the kind of reference that no normal teen would make, but rather than just trot out Diablo Cody-esque dialogue, the show knows it’s out of place – Archie tries to laugh along at her joke, despite not really getting, while Betty looks at him disapprovingly. We immediately learn something new about each of them.

“I’m already the Blue Jasmine of Riverdale High,” she comments drily, later, to Betty and her GBF, Kevin (Casey Cott), about her dad’s Madoff-like corrupt fall from financial heights, which led her and her mum to come to Riverdale – another nod that would surely be over a typical teen’s head. And yet they stand alongside nods to recent TV phenomena, from Mad Men (Betty’s look is “too Season 5 Betty Draper”) and Outlander (the oh-so-hot Archie is called “Teen Outlander”, as well as “red-headed Ansel Elgort” and “Justin Gingerlake”) to even Stranger Things (watch out for Shannon Purser, aka. Barb, as Ethel Muggs in Episode 3, who even gets her own “#JusticeforEthel” shoutout). It’s a mix of name-drops that, combined with the David Lynch vibe, gives the whole show an idiosyncratic timelessness that feels both old and new.

That slight subversion of expectations is even more apparent in the way that Veronica and Betty’s friendship develops. The duo clash repeatedly at first, with Cheryl (this school’s Regina King) trying to drive a wedge between them, from kissing party games to attempting to pick only Veronica for the cheerleading squad. But before that love triangle can really take hold, Riverdale does something genuinely brilliant: it brushes it off in favour of focusing on Betty and Veronica’s friendship. That might start with a unnecessary girl-on-girl kiss in Episode 1, followed by another teasing scene in a cupboard, but the series soon moves into a plutonic zone that gives its female leads more substance – and more to do.

Mendes’ Veronica is instantly the stand-out of the show, slyly dispatching one-liners and playing the enigmatic outsider with a cartoonish flair and, when the truth about her parents comes out, sincere vulnerability. Reinhart’s Betty, though, emerges as even more fascinating to watch. That’s because neither are forced to conform to their stereotypes: Betty is your familiar Nice Girl, doing homework on time and dutifully devoted to her childhood sweetheart, Archie. But Riverdale never condemns her for that. In fact, it celebrates it, as her niceness becomes something Veronica aspires to, so that she can be more than the school’s wealthy ice queen socialite.

They repeatedly try to help each other out, from Veronica getting Betty on the cheerleading team to Betty helping Veronica get her own back on woman-shaming football player (emphasis on the word “player”) Chuck Clayton. At both times, Reinhart gives us a flash of something more disturbing beneath Betty’s already intense persona – with her sister, Polly, having gone into a mental institution following a relationship with Jason Blossom, you wonder just how much rage is bubbling below Betty’s calm expressions and briefly-seen wig.

Naturally, Veronica has to comment on the show’s strategy explicitly, as the gang attend a school dance. “Guys, can’t we just liberate ourselves from the tired dichotomy of jock, artist?” she argues. “Can’t we, in this post-James Franco world, be all things at once?”

Which brings us nicely to Archie, our effective protagonist and hero of the story. Next to Betty and Veronica, he’s surprisingly the weakest link. After working at his dad’s construction yard over the summer, he’s suddenly become Dwayne Johnson, something that attracts the attention of music teacher Miss Grundy, with whom he has an (ahem) harmonious encounter. But while that subplot only becomes more inappropriate, it also ties into Jason’s disappearance and Archie’s central dilemma, which is that he wants to play both football (his dad’s favourite) and music (his own favourite). Much like Veronica and Betty, Archie is also encouraged to break those stereotypical dichotomies, with Luke Perry as Archie’s dad, Fred, managing not to be the one-dimensional dad who would traditionally force his opinions upon his son.

High School Musical, but without Zac Efron? That’s not far off, in some regards, as Archie’s song-writing ambitions mean we also get to meet Josie and the Pussycats, the school’s resident hip band, who regale us with some properly catchy numbers in the opening episode, including a rendition of Sugar, Sugar (which, according to Wikipedia, was a song originally recorded by The Archies, Archie’s own band within an animated TV series based on the comics – naughty The CW).

One of The Archies was Jughead Jones, Archie’s sarcastic best friend, who is here turned into our narrator. Cole Sprouse’s bleak voiceovers promise all kinds of shady antics in the future, as he hangs around in the local diner, the Chok’lit Shoppe, overlooking everything with the air of a detached, antisocial writer. The show will need to step on the gas to deliver on those antics, following an anti-climactic twist in Episode 3, but Jughead at least becomes more involved as the series continues, from reconciliatory chats with Archie to a bit of investigative journalism into the death of Jason. (“I’d love to stay,” he says, in one of the opening episodes’ best lines, “but I’ve got to shake down an evil Adventure Scout…”)

Toe-tapping music, an episode devoted to exposing sexism and a murder-mystery to boot? This is a confident start for Riverdale, which arrives on the scene steeped in influences, but in no doubt of its own identity. “Our story is about a town, a small town, and the people who live in the town,” explains Jughead at the start. Riverdale is unsubtle, self-aware and over-stuffed with style. Is it worth watching? So far, absolutely.

Riverdale is available on Netflix UK, as part of £7.49 monthly subscription, with new episodes arriving every Friday. 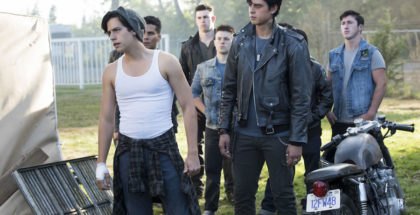