The cast give it their all, but Riverdale's musical episode is a damp squib - until its terrific closing sequence.

Warning: This contains mild spoilers for Episode 18 of Riverdale Season 2. Not seen Riverdale? Catch up with spoiler-free review of the first three episodes.

After another interminable break, Riverdale returns with a musical episode based around Kevin (Casey Cott) directing Stephen King’s Carrie. It must have looked a good prospect on paper, in the writers’ room, the team spit-balling ideas and somebody floated the suggestion of a musical. It is, after all, something of a tradition for television shows to do musical specials, but it’s usually well down the line, when nobody cares anymore about logic and reason and the creative well looks a bit dry. Also see: flashback episodes to when characters were younger and dream sequences.

At least Buffy the Vampire Slayer’s famous Season 6 episode, Once More, With Feeling, was hinged on a demon coming to Sunnydale, one with a penchant for singing and dancing, thus – sort of – making sense and sitting upon an internal logic. The big problem with Riverdale getting its stage school warbling on is the characters sing outside the confines of rehearsals and, well, it feels very odd and clunky. Why would they be singing to each other away from rehearsals? While the show revels in genre fluidity and boasts a strikingly artificial lighting style, which constantly draws attention to itself, the decision to throw in jazz hands and big numbers feels a frivolous and camp bridge too far.

The songs suck. There’s no two ways about it. The cast, of course, give the tunes some welly, but the drama club getting their Glee on is just weak sauce with a side order of lame. The lyrics and music are curiously bland, as if any old cobblers would do, if delivered with gusto, and nobody would care too much. If you’re going to craft a musical special – and make much ado about it weeks before we see it on social media – at least provide the viewership with something to remember.

The entire episode, thankfully, isn’t hinged around the musical; rather, Carrie is integrated into the plot and reflected poignantly in Cheryl’s continued fight against her mommie dearest. There’s also a strong narrative emphasis on a series of reconciliations: Archie (KJ Apa) patching things up with his old man (Sideshow Luke Perry), B (Lili Reinhardt) and V (Camilla Mendes) attempting to make amends after a few rounds of antipathy and bitchy comments, and Alice (Mädchen Amick) sitting down with Hal (Lochlyn Munro) for a heart to heart about devious Chic (Hart Denton).

The result is a damp squib. Thank heavens, then, for its terrific closing sequence… 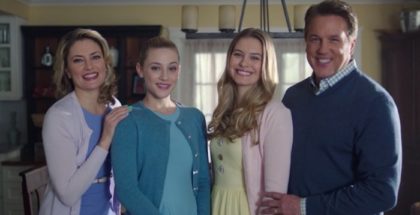 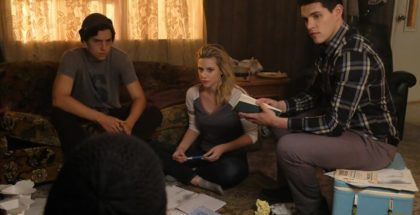