Trailer: Tamara Jenkins' Private Life set for October Netflix release | Where to watch online in UK | How to stream legally | When it is available on digital | VODzilla.co 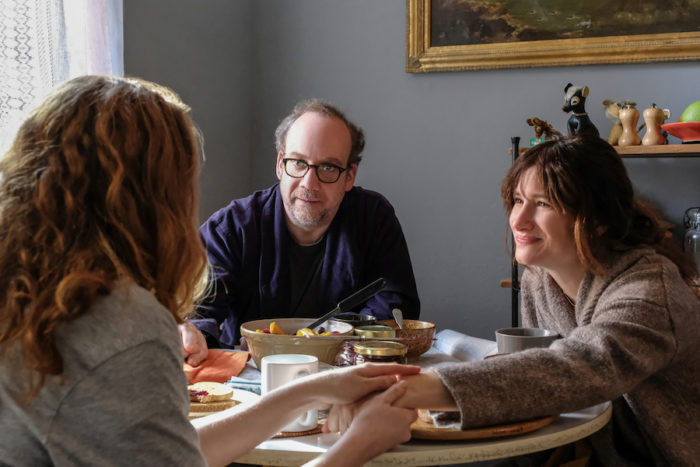 “We’re doing everything we can short of kidnapping to start a family,” says Richard (Paul Giamatti) in the trailer for Private Life, and it sets the tone for Tamara Jenkins’ heartfelt, tender comedy about the painful hope of trying to have a baby.

Written and directed by Jenkins, who previously brought us the spikily brilliant Savages, Giamatti co-stars with Kathryn Hahn (Transparent), who plays Rachel, Richard’s wife. She’s a successful author, he’s a veteran theatre producer, and while they still have to live in a rent-controlled apartment in their 40s, she’s undergoing the stress of multiple fertility therapies in an attempt to get pregnant.

The couple are joined by Desmin Borges as Sam, a rough-around-the-edges guy who works at Richard’s pickle comapany, and Denis O’Hare as Dr. Dordick, the specialist Rachel goes to see, plus Kayli Carter as Sadie, the stepdaughter of Richard’s brother who asks to stay with them, and Molly Shannon as Sadie’s overbearing mother. How this cocktail of awkward relationships and frustrated emotions will resolve is anyone’s guess, but with Jenkins at the helm, Netflix’s film promises an entertaining balance of quirks, feels and laughs.

Private Life is available on Netflix UK, as part of an £9.99 monthly subscription.

The movie, which is written and directed by Tamara Jenkins, stars Kathryn Hahn and Paul Giamatti as a couple who are trying to have a baby. Hahn plays an author undergoing the multiple fertility therapies, something that puts a strain on her relationship with her husband, Richard (Giamatti), a theatre producer. Giamatt’s character also, in a peculiar quirk, runs a small business called “The Pickle Guy”.

Borges will play Sam, who is described by Deadline as “a rough-around-the-edges guy”. He is also the only employee at Richard’s pickle company.

Borges, who has appeared in Preacher as Carlos and also in The Good Wife, is best known for his series regular role on the anti-romantic comedy You’re the Worst. Snapped up by Channel 5 in the UK, the twisted rom-com follows two selfish, unlikeable people, as they begin a relationship, with Borges playing Edgar Quinterois, the friend and roommate of the male lead.

He joins a cast that includes Molly Shannon and Denis O’Hare. A release date for the film has not yet been announced.

Denis O’Hare has joined the cast of Netflix’s Private Life.

The drama, which stars Kathryn Hahn, Paul Giamatti and Molly Shannon, is written and directed by Tamara Jenkins, who previously brought us Savages. It follows an author (Hahn) who is undergoing multiple fertility therapies to get pregnant, putting her relationship with her theatre producer husband (Giamatti) on edge.

O’Hare, who will be familiar to fans of American Horror Story (also available on Netflix), will play Dr. Dordick, the specialist whom Hahn’s would-be mother goes to see.

Paul Giamatti will share a Private Life with Kathryn Hahn, as the actor signs up to Netflix’s original film.

Written and directed by Tamara Jenkins, who previously brought us Savages, the fertility drama follows an author who is undergoing multiple multiple fertility therapies to get pregnant, putting her relationship with her husband on edge.

Giamatti has signed on to play the husband, who Deadline describes as a theatre producer and owner of an establishment called “The Pickle Guy”, who has been supporting his wife in their long-running struggle to start a family, including helping to administer hormone therapy.

Giamatti, who has starred in everything from Sideways to Showtime’s ongoing series, Billions, needs no introduction. Hahn, meanwhile, will be familiar to anyone who has seen Amazon’s Transparent and is now heading up the new series from Netflix’s rival, I Love Dick.

Transparent’s Kathryn Hahn is in talks to head to Netflix for her next project.

The actress, who has repeatedly stolen the whole of Jill Soloway’s Amazon’s show away from the rest of the excellent ensemble, is in talks to star in Private Life, a fertility drama from Tamara Jenkins.

Writer-director Jenkins previously brought us Savages, starring Laura Linney and Philip Seymour Hoffman. Her new film, if the talks are successful, would star Hahn as an author who is “undergoing multiple multiple fertility therapies to get pregnant, putting the relationship between she and her husband on edge,” reports Deadline.

The Netflix original is produced by Anthony Bregman (The Circle, Collateral Beauty, Foxcatcher) and Stefanie Azpiazu (Enough Said, The Circle). The filmmakers are currently looking for an actor to play the husband of the lead – a theatre producer and own of a business called The Pickle Guys – with Zach Galifianakis at one point reportedly circling the role.

Hahn, meanwhile, will soon be seen in the sequel to comedy Bad Moms and Soloway’s new Amazon series, I Love Dick, which was recently ordered to full series, following a successful pilot.