Stranger Things producer and James Wan team up for Netflix slasher | VODzilla.co | Where to watch online in UK

The producers of Stranger Things and James Wan are teaming up for a new Netflix slasher movie.

Titled There’s Someone Inside Your House, the horror movie is based on the bestselling novel of the same name by Stephanie Perkins. The young adult book tells the story of a high school student whose friends inexplicably start to die in a string of gruesome murders. Deadline, which broke the news, describes the project as “similar in tone” to Stranger Things. Indeed, it comes from the same producer, 21 Laps, run by the show’s EP, Shawn Levy.

With James Wan’s Atomic Monster also on board to produce, the combination proved something of a hot ticket, and Netflix had to outbid other studios to nab the project for itself. 21 Laps’ Dan Cohen is also producing, alongside Atomic’s Michael Clear.

The film is written by Henry Gayden (‪Earth To Echo‬), who recently penned DC blockbuster Shazam!, which is currently in production. The synopsis of the original novel reads as follows:

“More than a year after her parents sent her away from Hawaii to live with her grandmother in landlocked Nebraska, Makani Young is still adjusting to her new life. She’s made a small group of close friends and even flirted with romance, but her past in Hawaii is still hard to forget. And then… one by one the students of her new high school begin to die in a series of gruesome murders. Makani doesn’t know who’s next on the list. Between this, and a secret scorching relationship with the school weirdo, this school year may turn out to be one to die for… literally.”

The deal marks an ongoing relationship between Netflix and Levy, who recently inked a multi-year deal with 21 Laps for the development of new TV projects.. 21 Laps also has the Netflix film Kodachrome on its slate for the coming year – alongside, of course, the small matter of Stranger Things Season 3. 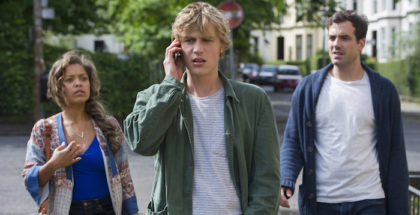