What's coming soon to Netflix UK in December 2020? | Where to watch online in UK | How to stream legally | When it is available on digital | VODzilla.co

Christmas is finally upon us, and Netflix has saved some of its most anticipated treats to unwrap this December.

There’s nostalgia on offer from David Fincher’s period Hollywood awards contender Mank, the glamour of musical theatre waiting in the wings in Ryan Murphy’s The Prom and a chance to see Chadwick Boseman’s final screen performance in music drama Ma Rainey’s Black Bottom. With Shondaland’s first Netflix series, Bridgerton, on the way, as well as one last outing for Chilling Adventures of Sabrina, it’s a month stuffed with big hitters – and that’s even without mentioning George Clooney’s new film, The Midnight Sky.

The Holiday Movies That Made Us: Season 1 – 1st December

Netflix’s entertaining pop culture docuseries turns its gaze on to the festive favourites that light up our living rooms every Christmas.

Do do doo. Dum. Dummmm. Steven Spielberg made jaws drop with those five notes in a deceptively simple piece about mankind connecting with an extraterrestrial power. The result is one of the greatest science fiction films of all time.

Christopher Nolan’s theatrical tale of illusion and deception is a compelling character study.

Where the Wild Things Are – 1st December

A sad feel-good movie, Where the Wild Things Are is a wonderful piece of childlike art.

Applying the laws of life on Earth to the rest of the galaxy, this series blends science fact and fiction to imagine alien life on other planets.

A gifted young singer becomes an instant sensation on a popular talent show in this musical comedy.

Based on a script by David Fincher’s late father, Jack, this period drama sees 1930s Hollywood re-evaluated through the eyes of scathing social critic and alcoholic screenwriter Herman J. Mankiewicz as he races to finish the screenplay of Citizen Kane for Orson Welles.

Netflix’s adult animated comedy takes on summer camps in its fourth run, which introduces its teen to the Anxiety Mosquito.

Christmas gets weird — really weird — after George and Harold go back in time to change up a few of their beloved holiday’s traditions.

Facing disapproving parents, a knotty love life and her own inner critic, an aspiring comic ditches her cushy but unsatisfying life to pursue stand-up

Iconic Mexican-American performer Selena rises to fame as she and her family make sacrifices in order to achieve their lifelong dreams.

A resilient housewife, her husband and their marriage therapist become mired in a toxic love triangle in this Turkish film.

A man foils an attempted murder, then flees the crew of would-be killers along with their intended target as a woman he’s just met tries to find him.

Join Lucky and her friends on a mission to save Maricela’s beloved mare, Mystery, from greedy horse thieves who’ve taken her captive with a wild herd.

They’re philosophers, storytellers and pioneers in their fields. Four surgeons reflect on their lives and professions in this inspiring docuseries.

An idealistic engineer builds his own island off the coast of Italy and declares it a nation, drawing the attention of the world — and the government.

Based on a survival thriller manga, this anime follows a listless, jobless and video-game-obsessed young man, who sees a strange light and suddenly finds himself in a mysteriously emptied out version of Tokyo.

Ryan Murphy’s take on the Broadway musical follows Dee Dee Allen (Meryl Streep) and Barry Glickman (James Corden) who are New York City stage stars with a crisis on their hands: their expensive new Broadway show is a major flop that has suddenly flatlined their careers. Meanwhile, in small-town Indiana, high school student Emma Nolan (Ellen Pellman) is experiencing a very different kind of heartbreak: despite the support of the high school principal (Keegan-Michael Key), the head of the PTA (Kerry Washington) has banned her from attending the prom with her girlfriend, Alyssa (Ariana DeBose). When Dee Dee and Barry decide that Emma’s predicament is the perfect cause to help resurrect their public images, they hit the road with Angie (Nicole Kidman) and Trent (Andrew Rannells), another pair of cynical actors looking for a professional lift. But when their self-absorbed celebrity activism unexpectedly backfires, the foursome find their own lives upended as they rally to give Emma a night where she can truly celebrate who she is.

Six ambitious student actors audition for the prestigious August Wilson Monologue Competition, culminating in a riveting final round on Broadway.

The Mess You Leave Behind – 11th December

A teacher starts her job at a high school but is haunted by a suspicious death that occurred there weeks before… and begins fearing for her own life.

After a heartbreaking loss, a grandfather struggling to reclaim his passion for painting finds the inspiration to create again.

With his carefree lifestyle on the line, a wealthy charmer poses as a ranch hand to get a hardworking farmer to sell her family’s land before Christmas.

When an attack brings down the star student at an elite ballet school, her replacement enters a world of lies, betrayal — and cutthroat competition.

Hrishikesh Hirway’s excellent podcast, which gets musicians to take apart their own songs, piece by piece, gets the Netflix TV treatment.

How to Ruin Christmas: The Wedding: Season 1 – 16th December

Prodigal daughter Tumi tries to make things right after completely ruining what should have been her sister’s picture-perfect Christmas wedding.

In this intimate documentary, Brazilian pop queen Anitta opens up about fame, family and her fierce work ethic, revealing the woman behind the hits.

Viola Davis and Chadwick Boseman star in this film based on August Wilson’s play about Ma Rainey, the “Mother of the Blues”, who makes a record in a studio in Chicago, 1927, only for Tensions boil between her, her white agent, her producer, and her bandmates.

As humans turn into savage monsters and wreak terror, one troubled teen and his apartment neighbors fight to survive.

At times dark, at times disturbing, four short films explore stories of those who dare to dream and desire — and those determined to stand in their way.

This refreshing, female-led sequel makes up for low-key heist thrills with sheer fun.


In the aftermath of a global catastrophe, a lone scientist in the Arctic races to contact a crew of astronauts with a warning not to return to Earth.

The eight close-knit siblings of the Bridgerton family look for love and happiness in London high society. Inspired by Julia Quinn’s bestselling novels.

When Grandma decides it’s time to put her affairs in order, the family clashes over who’ll inherit her house.

Grieving the death of her grandfather, Neige navigates family conflict and questions her world in this meditation on cultural identity and roots.

Netflix’s wonderfully dark reimagining of the teenage witch returns for its fourth and final chapter.

Other new releases coming soon to Netflix UK in December 2020:

9th December
How to Get Away with Murder: Season 6
Kalel, 15
Masameer Classics: Season 4
The Surgeon’s Cut: Season 1
Regiment Diaries: Season 2

10th December
The Panti Sisters
She’s the One

16th December
The Ripper
Vir Das: Outside In – The Lockdown Special 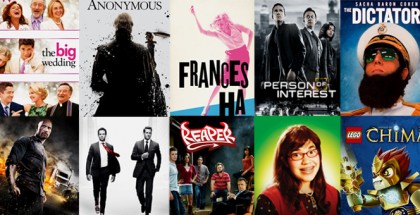