UK TV review: Hannibal Season 2 Episode 10 (Naka-Choko) | Where to watch online in UK | How to stream legally | When it is available on digital | VODzilla.co

As we get closer to the climax of what has been a truly breathtaking season, the bodies are piling up and the murders are getting more inventive – this week’s presentation is a show highlight, a work of deranged beauty and horror.

The other characters are melting away in the heat cast by the show’s two leads. Again, the Emmys have missed a fairly obvious trick this year by the glaring omission of this show. Mads Mikkelsen has always been a force to be reckoned with, but this season, it’s Hugh Dancy who deserves serious props for his acting chops. And while we’re on the subject of awards, the show also deserves to clean up in production, picture editing and, of course, music – Brian Reitzill matches the inventiveness of the murders with an inspired use of instruments, including, this week, a theremin. (We can’t wait to see when they bring out the saw…)

But for all the beautiful camera work and soundtrack, it’s the main duo that keep us glued to the screen. Will and Hannibal’s reckoning has become more of a chess game than a flat-out fight to the death, and the two are developing smarter tactics to carve each other to pieces.

As Jack Crawford, Miriam Lass et al fade into the background, other characters are coming to the fore. “Feed ‘em to the pigs, Errol!” rings loudly through many of the scenes in this week’s episode, as we meet Margot’s brother, Mason Verger (Michael Pitt), the charismatic, sinister heir to his father’s fortune and her tormentor. Mason’s vicious breed of super-pigs are being trained up to provide top quality meat as well as to devour it, as we see when he feeds them a human effigy (made, conveniently, of meat), fitted neatly into one of Margot’s suits.

Pigs, and delicious pork recipes, are the big attraction on the episode’s menu, notably the suckling pig Hannibal serves at possibly the most awkward dinner of all time – a three-way between Hannibal, Will and Alanna Bloom, following a scene that cuts together two intimate encounters to create the same triumvirate effect (although, with the inclusion of Will’s horned friend, decidedly weirder). But at dinner, it’s Alanna who feels the most uncomfortable, and rightly so; she’s merely an accessory in what is evolving into a beautiful, deadly bromance. Lovers and family, killer and victim, master and beast, good and bad, even butcher and meat.

Far from being only a fisherman, Will is now bringing his own meat to Hannibal’s table, taking up the mantra so fittingly reworked by Freddie Lowndes – he can’t beat Hannibal so he’s chosen to join him instead. And, as they chop up the spoils from Will’s first kill (a laugh-out-loud line suggesting the identity of the victim), it has to be said that they do make a lovely couple.

Orange Is the New Black leads 2014 Emmy nominations for comedy

Trailer: Ben Whishaw in Lilting available to watch online in UK on same day as cinemas 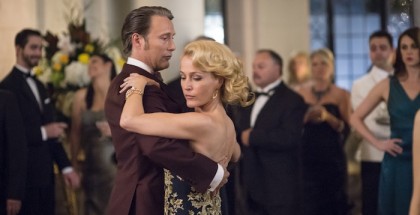