UK TV review: Hannibal Season 3, Episode 1 | VODzilla.co | Where to watch online in UK | How to stream 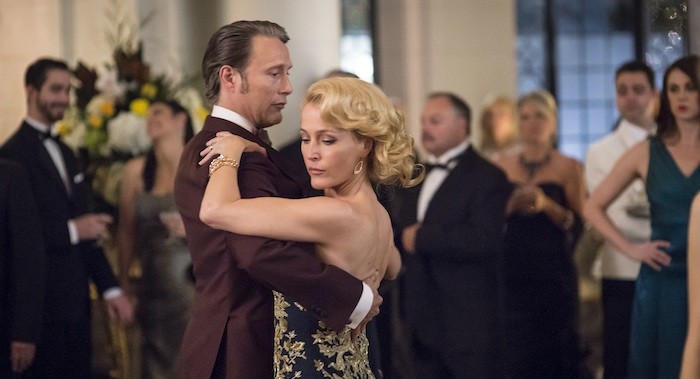 A masterful return captures the humour and horror of this most unorthodox cookery show.

And so, like the lethal yet beautiful predator that he is, Hannibal has slunk back onto our TV screens. Or more precisely, building on the dramatic, yet measured, exit he made at the end of last season’s devastating finale, he has zoomed his way back – again, as a racing predator might – on a motorbike. Set to a frantic and electric theme, the show opens with Hannibal riding through a pitch-black Parisian night, the score looping like a rattling roller coaster, evoking both the sounds of the bike and the Hitchcockian slasher tradition in a track that is both literal and thrilling.

The episode picks up following Hannibal’s escape (if drinking champagne in a luxurious jet can be classed as “escape”) at the end of the so-called “Red Dinner” of the Season 2 finale. Now, he’s extending his alternative cookery routine to delight those who cross his path in Europe. From Paris to Florence, we see him infiltrate the echelons of academic society, stunning them with his dance moves, as well as his knowledge of Dante. But woe betide any of those who foolishly decide to follow him down into the Inferno, as a wonderfully suggestive sequence at the opening of the episode suggests. Make no mistake: this is still the same man who left behind a massacre and walked out into the rain, no matter how prettily he delivers his one, expertly deployed word of French.

The rain-soaked finale is evoked time and time again in this episode – splashes of oil, dispersed bath water and delicately fizzing champagne – reminding us of the devastation left behind and of the inevitable tears to come. But for now, we are left in suspense as to the fate of the guests, with the wet streets of Florence and Paris Hannibal’s to roam.

Music, too, takes a notable dominance in this episode, with everything from an almost amusingly upbeat tango-like tune to accompany another of Hannibal’s awkward parties to the extraordinary greeting on the motorcycle suggesting that we’re encountering a different beast to the one we’ve come to know. This season, we get the sense we’re going to get a closer look at the myriad strands that make up the man himself and make up those around him. We’re treated to a series of flashbacks – shot in black and white in an episode that uses colour as delicately and precisely as it uses music – in which we are reintroduced to Abel Gideon (Eddie Izzard) and observe some of his final meals with Hannibal (and yes, they’re as unorthodox as you might imagine). As Hannibal carves chunks off Abel, Abel attempts to cut away, surgeon-like, at Hannibal’s glossy veneer. The man underneath, a deep, rich and flavoursome dish, will likely be ours to savour in episodes to come.

But for now, our guide through this opener might have bitten off more than she can chew. Hot on the heels of her shock decision at the end of Season 2, we are also reintroduced to Bedelia Du Maurier (Gillian Anderson), Hannibal’s one-time therapist turned… lover? Accomplice? Moral compass? Victim? Witness? She has played all these roles and more for Hannibal (we have to assume) and it looks that she will exhaust her full range over the course of the season. When faced with a master predator, lesser creatures must adapt to survive. It seems Bedelia, caught in the trap she seems to have set for herself, will have to become quite the chameleon to survive in Hannibal’s latest lair. 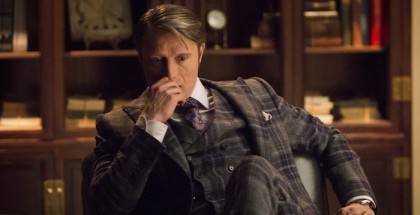 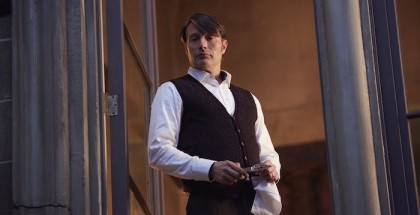 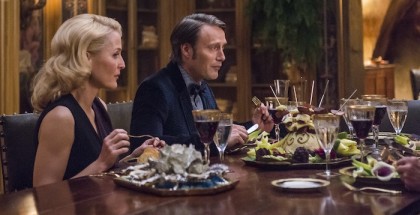 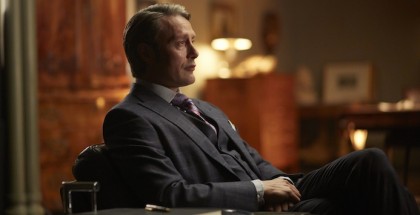