UK TV review: Hannibal Season 2, Episode 2 (Sakizuke) | Where to watch online in UK | How to stream legally | When it is available on digital | VODzilla.co

Art and science. The forensic and the fantastical. Angels and past demons. The eyes of God and the feet of man. It’s all there in the second – much stronger – episode of Hannibal Season 2.

This week opens, again, with violence and a fast pace, picking up where the previous episode left off to check in on the “human colour palette”. While the inventiveness of these murders are what draws the morbid crowds – ok, us – to this show, we imagine as the series progresses that the their role will shift from plot to providing more of a backdrop against which Hannibal’s madness is cast into sharp relief. For the first time, we are given the chance to see with our own eyes how the murderous scenarios Will was previously called in to solve play out. This means we can know for a fact when Will Graham is being honest – or do we? The recently-explained pendulum swing motion used in his crime scene reconstructions now has a swathe of alternate meanings – and when Hannibal seems deliberately naive.

Of course, the good Doctor is always one step ahead of us – an excellent pun given one laugh-out-loud moment of vicious, culinary experimentation juxtaposed with a frantic classical chorus. The music selection in Hannibal is as much an essential part of the experience as the camera work, and its black humour mixed in with the macabre never fails to disappoint.

Footwork, and the precarious steps the characters take, are seemingly a key tell in this episode, from the clues revealed in a victim’s final footsteps to those forward and backward taken by Hannibal and his therapist. Given Will’s confinement in a cell barely the size of a phone box for formal interviews, the movements of characters are thrown into sharp focus, further emphasising his position of isolation, and how close all the characters are to teetering off the knife edge and into Hannibal’s dinner.

Away from Lecter’s butchery, Will has found a new mental pastime of fishing, a sport entirely about patience, calm and control – and one that just happens to be done standing still. Will is also busy fishing the swathes of his own mind, and resources, for evidence of his innocence. Here, he’s given a new opportunity in the form of crime scene investigator Beverley Katz, one of the series’ strong supporting cast, who, as Alanna Bloom takes a step back this episode, is offered as the connector between him and the outside world, including Jack Crawford.

As much as this series will climax with a reckoning for Will and Hannibal, it may well climax with the same for Lawrence Fishburne’s Jack, facing up to the reality that he has hired either one or two serial killers to help him catch one or both. Jack’s story, briefly humanised in Season 1 with the introduction of his (currently absent) sick wife, seemed to be a distraction at best, but as the trial date for Will races closer and the microscope is turned on the FBI itself, this might become Jack’s reckoning too.

The fact that TV’s favourite lawyer (not you, Ally McBeal) Miranda Hobbes – Cynthia Nixon in a guest role – is going to be the one to give it to him only makes each step towards it more appetising. 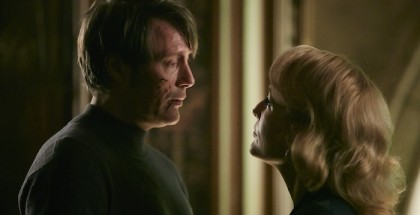