Smiles (even without lips)

Already seen Episode 4? Read on at the bottom for additional, spoiler-filled comments.

Season 3 is taking its sweet(bread) time to get going, but it would seem like the throttle has finally been opened, as a whole host of familiar characters come back onto the scene in Episode 4 to start the machinations to give Hannibal his just desserts.

First up is the last piece of the Red Dinner puzzle, Alana Bloom, Hannibal’s one-time lover and Will’s one-time therapist. “Changed” by the after-effects of her tumble from Hannibal’s first floor window, Alana has gone from watchful and thoughtful bystander-cum-plaything to red-lipped, fiercely dressed Valkyrie, spewing promises of Old Testament vengeance through pursed lips. If a showdown between Bedelia and Alana ever comes, it looks like they might finally be evenly matched.

Hannibal now has a whole host of enemies wishing to chew over him, with Alana holding the leashes of a series of lethal attack dogs. Well, ‘lethal’ may be too strong a term when you consider one of them can’t exactly give a greyhound a run for its money. Yes, Mason Verger is back on the scene, following his unorthodox dinner last season, with a brand new face and a brand new actor in the role. Joe Anderson – taking over from Michael Pitt, the new face of BMW, as the face of a man with half a face – injects a mad scientist-style wry humour to Mason that will add a nice foil to the sombreness of the series as a whole. Mason, understandably, wants revenge for Hannibal’s part in his efforts to make a quite literal dog’s dinner of himself and he’s assembling a crack team of avengers to help. Also along for the ride is Dr Chilton, last seen being shot at by the traumatised and brainwashed Miriam Lass, now miraculously repaired and ready to do the Lord’s work on his slippery opponent.

Counterbalancing these brutal themes of vengeance are the softer foils of the ever calm (yet ever devastating) Will, divested (for the moment) of Chiyo and back home to pick up a few things for his journey. There, he reencounters Jack on home turf, the two gently counselling each other back to heath, while a mildly bemused Alana stalks (yes, a woman who goes from wheelchair to heels and a cane in the course of an episode is easily capable of stalking) between scenes to offer her new vision of how to bring about Hannibal’s destruction. But Jack and Will are bound up in their own kinds of grief – Jack preoccupied with his dying wife Bella and Will pondering Hannibal, as always. No wonder Alana is getting restless – in the face of so much moping, we’d pick a guy with half his face chewed off any day.

An episode evenly mixed with scenes as cracking with vengeful tension as ones overcome with quiet grief, it gives us hope for Season 3 as a piece of drama. How this mix will translate into future weeks, as the traps close around Hannibal, as well as how it will fit in with whatever upcoming plot remains to be seen. But for now, it’s nice to be out of the darkness of the catacombs and mind palaces and into some light relief.

Hannibal Season 3 is available on Netflix UK, as part of an £8.99 monthly subscription.

– Am I the only one who can’t figure out if Bella’s death was entirely natural? It seems implied that a mild form (if such a thing exists) of euthanasia took place. Either way, it’s conveniently cleared Jack’s plate of caring for his sick beloved, and with his time at the FBI supposedly ‘done’, can he now go off grid to catch the cannibal?

– If the Red Dragon is set to surface this season, how will he fit in with the machinations here? It’s worth noting I’ve not seen or read the source material, so things are about to get very interesting…

– Did Chilton steal that look from Javier Bardem in Skyfall or is it just me? The scene where he and Mason swap mutilations was great for shock value, as were all the beautifully orchestrated yet gory scenes of facial reconstruction and bullets through heads – the sort-of skeleton that was glimpsed when Alana fell, though? Best left to Game of Thrones. Purely from a curiosity point of view, seeing the stretching of skin for grafts was also strangely satisfying. Like making pasta in a pasta-rolling machine.

– Is Will planning to SAIL ACROSS THE ATLANTIC? That’s taking the water metaphor a little too far…

The rise of online TV – and its cost for the BBC 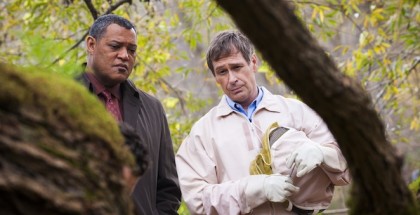