Why you should catch up with 3% on Netflix UK | VODzilla.co | Where to watch online in UK

Why you should catch up with 3% on Netflix UK 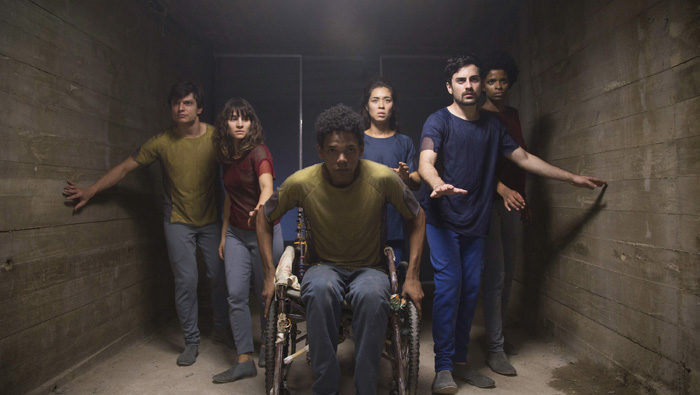 Dark-hearted dystopias have happily nestled quite easily into our psyche as of late. Even before the election of a certain demagogue who appears to be hell-bent on dismantling the social fabrics that hold America together, populist viewing was stocked with gloomy visions of the future. Be it the likes of The Hunger Games, ELysium, Divergent on the big screen, or the likes of The 100 on TV, western mainstream viewers have gotten used to the planets resources being depleted, and straggly (yet handsome) survivors having to use their wits against (usually) a powerful and shady elite.

Netflix, an all-powerful and (slightly) less shady elite streaming system have dipped their toes into the dystopian pool with 3%, a Brazilian series set in the future in which the world has been divided into two camps. Offshore is the little seen, yet idyllic utopia, in which the successful and affluent live out their days. Inland is for those who are less fortunate struggle to survive. The young survivors who live Inland are given the chance to try and enter Offshore by way of “The Process”, a series of tests develop to separate the wheat from the chaff. Of those who take the test, only 3% succeed.

Developed from a pilot created in 2011 and lead directed by City of God cinematographer César Charlone, 3% competently highlights Netflix’s willingness to embrace a brave new world. Ten years ago, it would be extremely doubtful that a show like this, despite holding a broad appeal, would make itself over to UK screens with such accessibility. However, 3% sits proudly nestled between the likes of hit shows such as Narcos and the muscular Hollywood fare that has come before it.

The City of God link is clear from the very start of the show: 3% holds a similar, close-quarters style. Exchanges are often shot in handheld, giving off that same sense of intimacy. The show, however, is drained of the colour and vibrancy held by the 2002 feature, and is often rather flatly lit – a creative choice which sometimes leaves the show’s visuals to be somewhat wanting. This does, however, help highlight the show’s main features; mainly, how it differs from the likes of Divergent.

At its core, the show isn’t giving us anything wholly original. Detail the basic storyline to anyone and it would be easy to get it mixed up with another young adult science fiction series. What make 3% stand out (as well as the devilishly fiendish quizzes of The Process) are the perspectives of the main characters. 3%’s cast is a varied and diverse one. The highlighted prospects feature the spoilt, rich Marco (Rafael Lozano), who comes from a long line of Process winners; Fernando (Michel Gomes), a well-meaning, wheel chair bound son of a preacher; Rafael (Rodolfo Valente), a smug and devious chancer; Joana (Vaneza Oliveira), an orphan who seems to be running away from her history and Michele (Bianca Comparato), whose reasons for taking the process are linked to a shady organisation named The Cause.

3%’s mixed cast highlights the varied background of Brazil. Characters such as Fernando gives us an active, disabled protagonist with actual goals and aspirations. Vaneza Olivera’s portrayal of Joana is a well-formed subversion of the type of one-note black female characters we can often see elsewhere. Whereas larger budgeted sci-fi can get by with overpowered yet passive lead characters, who are born gifted, the characters in 3% must bargain, barter and manipulate to make their way through their trails. There’s always a sense that the people you are watching are expendable; could you feel the same about the likes of Katniss Everdeen?

The show not only diversifies its players, but is also smart with its environment and subtext. The diabolical schemes of The Process feel reminiscent of pop social psychology tests, such as The Stamford Prison Experiment or the Milligan Obedience Test. 3% comes to us at a time in which Brazil is going through a recession, protests and the emergence of military police at major sporting events. 3% doesn’t hint at these as much as might be expected, yet knowledge of this gives the show’s themes of dystopia and inequality a solid grounding. Other elements also protrude out of the cracks. 3%’s talks of purification, as well as the bizarre, self-drowning rituals of the show’s severe antagonist, Ezequiel (João Miguel), appear to acknowledge Brazil’s catholic beliefs.

3% doesn’t reach the heights of profound detail that take place in shows such as Mr. Robot and its episodic structure (each episode focuses on one character) feels out of place in a world of grand, over-arching narratives. However, the show’s breezy pace, enjoyable performances (standouts: Olivera and Valente, who find complexities in their frosty characters) and well-used arrangement of Brazil’s political landscape make for a brief but entertaining diversion. When you’re done with the Netflix shows that have been hogging the limelight, watch this.

Mariah Carey to star in YouTube holiday special, The Keys of Christmas