VOD film review: The War Below | Where to watch online in UK | How to stream legally | VODzilla.co

VOD film review: The War Below

Salts of the earth

British miners are recruited to burrow beneath German lines in this emotionally gripping and thrillingly tense WWI drama.

Co-written and directed by JP Watts, this gripping WWI drama tells the fascinating true story of the British miners recruited to tunnel under enemy lines in 1917. Charged with planting explosives before the Battle of Messines, the men were ultimately responsible for one of the largest non-nuclear explosions ever recorded, killing 10,000 Germans with a blast that was reportedly heard in Downing Street.

The film largely fictionalises the main characters, but is no less engaging for that. Sam Hazeldine plays gruff Northern miner William Hawkins, who’s ashamed because a lung condition repeatedly prohibits him from signing up to fight in World War I. However, he gets his chance when British Army colonel Hellfire Jack (Tom Goodman-Hill) recruits him and a team of five fellow miners for a dangerous mission involving burrowing through thick clay.

The central story is so extraordinary that you can’t quite believe you’ve never heard it before. Even if you have, it’s a ripping yarn with a compelling hook, as Hawkins battles to prove his worth, clashing with a hostile superior officer (Andrew Scarborough) in the process.

Watts’ script, co-written with Thomas Woods, gets a lot of dramatic mileage out of the class-war aspect, so much so that the film often seems like a stiff-upper-lip/salt-of-the-earth face-off, in a good way. That’s hammered home by some strong character work – each of the miners are likeable, interesting figures, with Hellfire Jack (based on real-life officer John Norton-Griffiths) constantly caught between the ability and heroism of his miners and the dismissive scepticism of the top brass.

The set-up for the film is inherently nerve-racking – burrowing in unstable ground, carrying explosives, the possibility that the Germans might also be digging – and Watts wrings the maximum amount of suspense from the scenario, culminating in a thrillingly tense and ultimately deeply moving finale. To that end, his suspense techniques are extremely impressive, from creating the claustrophobic, fraught-with-danger atmosphere to clever sound design work and the sudden introduction and escalation of unexpected plot elements.

The performances are excellent too – Hazeldine stands out as doggedly determined Hawkins, and the film gives him a handful of powerful moments, while there’s strong support from Kris Hitchen (as Hawkins’ right-hand man, Harold) and Elliot James Langridge as the most sensitive miner, George. However, the acting honours are stolen by Goodman-Hill, who’s simply terrific as Jack, generating touching chemistry with Hazeldine and getting to deliver the film’s best line: “Gentlemen, tonight we may not make history, but we’ll certainly change the bloody geography.”

You Only Live Twice: A volcano lair to remember 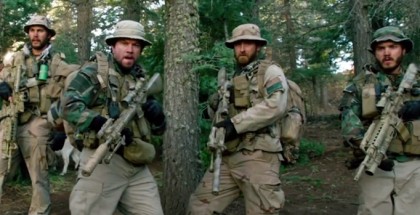