Netflix UK film review: Hunt for the Wilderpeople | VODzilla.co | Where to watch online in UK

Funny and feel-good, this Kiwi coming-of-age comedy is a daft and delightful slice of childlike adventure.

Learn the name Taika Waititi now, because you’ll be using it a lot in the coming years. Saying things like “Hey, have you seen Taika Waititi’s new movie?”, “It’s so cool Taika Waititi directed that Thor film!” and “What do you mean you mean you haven’t seen Hunt for the Wilderpeople?”

The latter is only the director’s fourth film, but it’s already confirmed him as New Zealand’s biggest new export since Flight of the Conchords. He helmed several episode of the TV series before teaming up with Jemaine Clement again for What We Do in the Shadows, a hilarious vampire spoof. Hunt for the Wilderpeople, based on Barry Crump novel, share that film’s same strain of absurd silliness, but filtered through a cute sentimental streak that doesn’t just charm your socks off; it charms your toes off as well.

The film follows Ricky Baker, a troublesome city kid, who winds up with a foster family in the Kiwi bush. While he bonds with Rima Te Wiata’s adorably sincere Bella, he’s far from friendly with Sam Neill’s Hec. And so it’s inevitable that the odd couple end up lost in the woods together. One is young, naive and has a Tupac obsession. The other is old, grump and has a rifle and a beard. Both of them like pancakes.

The gradual thawing of their relationship is entirely predictable, but Hunt for the Wilderpeople never fails to throw up unexpected laughs, thanks to a stellar cast that includes previous Waititi collaborators Rachel House and Rhys Darby.

At the heart of it all, Julian Dennison is fantastic as the urban fish out of the water, prone to talking about being a gangster in the least gangster way possible. Neill is clearly having a whale of a time as his belligerent uncle, grumbling with intimdating, towering presence that gradually shrinks to something sweeter. It’s that mix of tiny and huge that Waititi is a master of; jumping from the low-budget confines of What We Do…, he leaps onto an epic canvas without losing touch with his inner little guy; he conjures up all the spectacle of a Marvel movie with the scale of a haiku.

The juxtaposition is tongue-as-cheek but still disarmingly sincere. The camera soars over mountains and cars tear across the dirt plains, turning a misunderstanding into a national manhunt. It climbs with Ricky, as he launches an ambitious attempt to escape – only to make it barely 200 metres. It crouches under a tree, as SWAT teams troop overhead. “It’s like Lord of the Rings,” one of them mouths. You smile, because you’re already thinking the exact same thing. Funny and feel-good, this is a daft and delightful slice of childlike adventure.

Hunt for the Wilderpeople is available on Netflix UK, as part of an £8.99 monthly subscription. It is released on DVD and Blu-ray on 16th January 2017.

Where can I buy or rent Hunt for the Wilderpeople online in the UK? 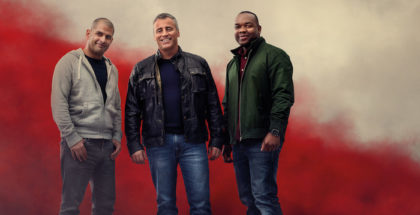