VOD film review: All American High Revisited | Where to watch online in UK | How to stream legally | When it is available on digital | VODzilla.co 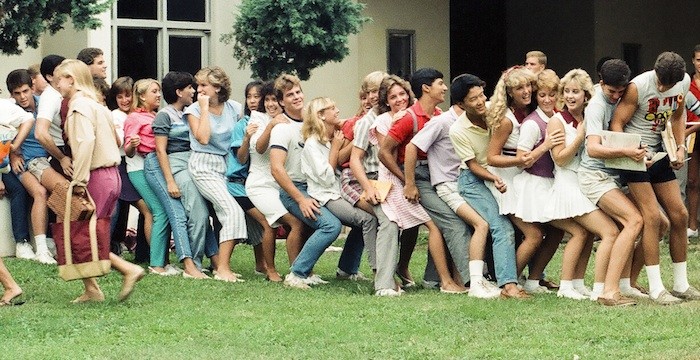 Appealingly nostalgic, but far from deep.

“We’re all going to wake up tomorrow and ask ‘now what?'” says one of the kids in All American High, a documentary that captures the life of the 1984 class at California’s Torrance High School. Created in 1987 by Keva Rosenfeld, the hour-long film gave the world an accurate picture of perms and proms – and promptly disappeared off everyone’s radar.

Perhaps it’s no surprise: the film arrived two years after John Hughes’ The Breakfast Club, which has become the definitive high school movie for generations since. Who would want to see real life socks and skinheads rather than the glossy, Simple Minds-soundtracked version?

30 odd years later and profiling school life is still not uncommon among documentarians. Earlier this year, we had a TV series – Teens – that examined what’s it like to grow up surrounded by social media, where tweets and online messages can extend bullying far beyond the playground. By comparison, the 1980s seem like a strange, alien time, with no Snapchat and no Instagram, let alone no mobile phones.

In that sense, Rosenfeld’s film is more of a commodity now than it was then: it sheds a light on a completely different era, as well as offering embarrassing pictures of people’s parents. And so we have All American High Revisited, a updated look back at the film, which presents the original 60-minute feature, followed by a final act of retrospective comments from those involved – a Before They Were Not-Famous for non-famous people.

The idea is inspired, as we see the reaction of the children’s children to the footage. Rather wonderfully, the teen rebels have become policemen and those who cheated at exams have become teachers. You couldn’t write it better. That sense of growing up and changing brings a neat slice of wit to the nostalgia that such movies inevitably trade in – half of the film’s appeal will be witnessing the fashion and frivolities of the era. Even the director’s reaction to it all at a screening of the film is priceless.

The film itself, though, is far from top of the class. It wins gold stars for resisting the temptation to make fun of its subjects – instead, it joins them in pointing fun at their Modern Lifestyles class – but it loses marks for not embracing all of the cliques in the school.

Here, our experience of Torrance is mostly dictated by Finnish student Riikkamari Rauhala, who offers an effective outsider perspective on the US teen traditions. “I think high school prepares us more for social life than work,” she observes, entirely accurately, as Rosenfeld takes us on a tour of keg parties and socials. But while she is an extremely likeable protagonist, a lot of the rest of the school population is never given any real screen time – not to mention problems such as bullying or academic stress – keeping our viewpoint disappointingly narrow. As a result, there is as much stereotyping going on here as in The Breakfast Club, producing a film that is appealingly nostalgic, but far from deep; qualities that are inherently passed on to its descendant.

“We’re all going to wake up tomorrow and ask ‘now what?'” says one student in the original movie. Several decades later, people still face that dilemma. But All American High Revisited, even in its new, elongated form, never manages to say much more than that. Some things never change.

The rise of online TV – and its cost for the BBC