UK TV review: Supergirl Season 2, Episode 4 | Where to watch online in UK | How to stream legally | When it is available on digital | VODzilla.co

This is a spoiler-free review: Read on at the bottom for additional spoilery bits.

Alien fight club. Those three words were probably all Supergirl’s producers needed to give Season 2’s fourth episode the go-ahead. After all, aliens, fight club, they’re both cool, right? So surely they should work together? Sadly, that’s not the case, as Survivors strives for gritty violence to follow Episode 3’s warm-hearted adventure. What follows feels less like a planned contrast and more like an uneven mistake.

There is, as always much to admire about the show – Melissa Benoist’s central turn is so charming that it’s impossible to dislike any episode – and the production team surround her with some great new supporting beasts, building on Welcome to Earth’s dive bar as an opportunity to play around with its VFX, as well as showcase its creature design.

Front and centre of that are J’onn and M’egann, as David Harewood continues to seize the chance to develop his Martian – offering M’egann the chance to bond psychically (a Martian tradition), she rejects him and spends half the episode moping like a teenager. Kara and Alex are, of course, on hand for support, but even these scenes, usually such a strength of the ensemble show, fall flat. “Have you tried saying sorry?” offers Supergirl simply, a line that takes her endearing sincerity to unbelievable extremes.

That gentle streak fares better in her scenes with Mon-El, as she follows on from last episode’s decision to help him learn about his powers. Learning, of course, means being tested by the DEO – which clears the path for Winn to steal the show, as Mon-El persuades him to let him out of the lab, leading to a hugely entertaining drinking spree. (The more Winn gets to do away from a computer, the more the charismatic Jeremy Jordan reminds us of Chris Pine.)

There’s equal fun to be had in the growing chemistry between Chyler Leigh’s Alex Danvers and Maggie (Floriana Lima), who, as with Episode 3, is playing a welcome part in driving the series’ narrative. She’s the one who tips off Alex about the fight club, by taking her there on a date – like Kara and her cousin, it’s nice to see a superhero show in which one of the main obstacles facing them is how much they enjoy doing superhero work.

But as the club is inevitably dismantled by our heroes, there’s an awkwardness that wasn’t there before; J’onn is given to delivering speeches about the importance of aliens not losing humans’ trust, while Kara follows up Episode 3 with more grandstanding lectures about the importance of aliens not realising the enemy is each other, but people like Roulette, the sinister socialite running the exploitative fights. But in a series where alien threats are the main fuel of each week’s storyline, it’s an odd position to take – especially when we learn more about M’egann’s backstory. At the heart of it all is the rapid shift from Supergirl’s relatively rare presence on Earth to a wider show-niverse that seems to be reaching for X-Men territory. Kara’s new career as a reporter, meanwhile, may link nicely into the investigative nature of the plot, but it mostly serves for another clash between her idealistic, inexperienced journo and Snapper Carr’s weary, cynical editor – a fine, albeit obvious, dynamic, but not one that we want to result in us seeing the same conversation repeated every episode. Add an unsatisfying final battle into the mix and maybe the main takeaway of Supergirl’s alien fight club should be that we don’t talk about alien fight club.

Supergirl Season 1 and 2 are available on Sky Box Sets and NOW. Don’t have Sky? You can also stream it on NOW, as part of a £7.99 monthly subscription – with a 7-day free trial.

-Mon-El may be great at arm-wrestling in pubs and flirting with Winn, but he’s not so hot at plot exposition – and sadly, that’s what he’s reduced to here, as he all-too-conveniently tells Kara about the main weakness of the big bad alien she has to fight at the club, so that she can win the final fight.

-Kara turning to Lena Luthor for help is all fine and dandy, but Lena being so helpful doesn’t really convince – unless it’s to build up to something later, now that Kara owes her a favour. Watch this space.

-Right, let’s talk J’onn and M’egann. She, naturally, turns out to be fighting at the club and he, naturally, ends up captured and having to fight her. But is that really all our villainess Roulette can come up with? The fact that she gets away with everything at the end, due to her social connections with National City’s rich and powerful only makes it all more of an anti-climax.

-The real surprise is that M’egann is actually a White Martian, aka. one of the not-very-nice Martians who killed J’onn’s race. It’s a decent enough twist for future episodes to explore, but wait, didn’t Kara just say that no aliens are threats? And that the real enemy is Roulette and the others? And what does that mean for all the other fight club aliens? Compare this to the tightly-written earlier episodes and it’s clear that Supergirl is capable of so much better than this.

20 people you may have forgotten were in Gilmore Girls 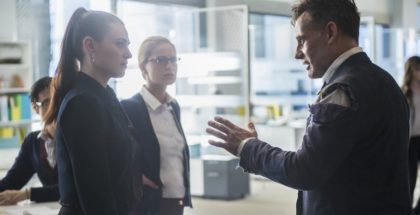