20 people you may have forgotten were in Gilmore Girls | Where to watch online in UK | How to stream legally | When it is available on digital | VODzilla.co

20 people you may have forgotten were in Gilmore Girls 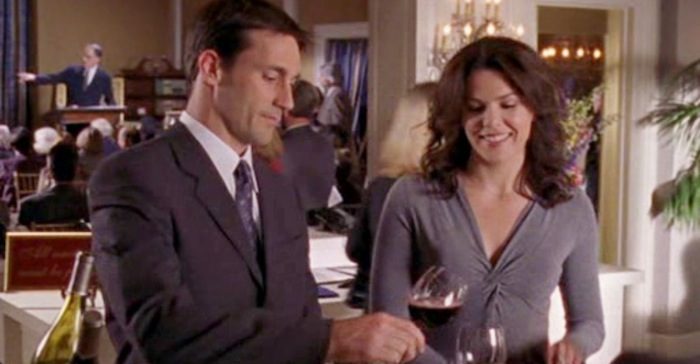 Looking back, it’s easy to see Gilmore Girls as a kind of incubator for raw talent. Many of the main supporting characters have gone on to develop impressive careers in both film and television. Melissa McCarthy, of course, has gone on the one of the highest grossing female stars in Hollywood, while Adam Brody went on to find fame as Seth Cohen in The OC, Matt Czuchry became better known as Cary Agos in The Good Wife, and Todd Lowe, who played Lane’s husband Zack, later starred in True Blood. Danny Strong, who was already fairly well known to much of the Gilmore Girls audience for playing Jonathan in Buffy, is now an Emmy award-winning writer, having penned Empire and Game Change.

And it doesn’t just apply to the main stars – something in the rarefied air of Star’s Hollow seemed to nurture fledgling actors. Part of the joy in rewatching the show now is to spot the people, who, back when the series first started airing in 2000, were little-known players appearaning in small parts.

With the gang getting back together this Friday for Netflix’s A Year in the Life, here are 20 (although we could go on) cameos that you may have forgotten from Gilmore Girls.

Studly Murray first came to the attention of a young TV audience as Tristan Dugray, one of Rory’s Chilton schoolmates, and the cause of one of the first wobbles in her relationship with Dean – a sign of things to come. After 11 episodes, Murray left Gilmore Girls rather too abruptly for many fans’ liking, but before long he was back on our screens as love-interest Charlie in Dawson’s Creek. Since then, he’s had major parts in One Tree Hill and Chosen, and can now be seen in Agent Carter. 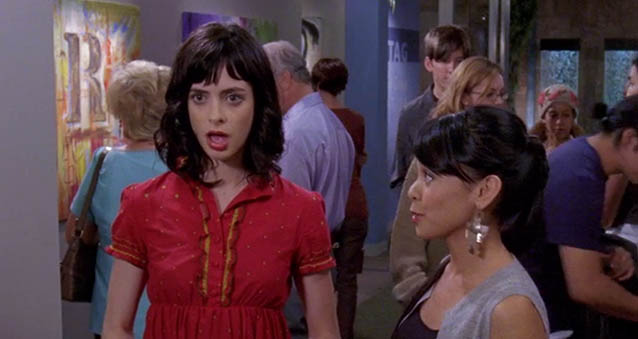 Ritter was known to some for her role as Gia in Veronica Mars before she got the part of Lucy, one of Rory’s Yale classmates, in the final series of Gilmore Girls. She went on to play Jane, Jesse Pinkman’s doomed lover, in Breaking Bad, and Chloe in Don’t Trust the B**** in Apartment 23, but is now best known as Jessica Jones. 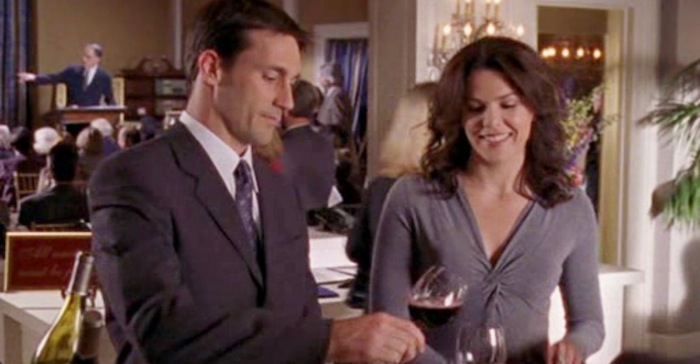 Hamm pops up as one of Lorelei’s love interests, Peyton Sanders, in his pre-Donald Draper days. In the Season 3 episode Eight O’clock at the Oasis, he offers a taster of his Mad Men anti-hero.

An early incarnation of the now infamous Ron Swanson can be seen as Beau Belleville, Jackson’s older brother. First seen in fan favourite episode The Festival of Living Art (Season 4, Episode 7), he later turns up at Jackson’s bachelor party, memorably trying it on with Lorelei, after being informed she’s a nymphomaniac.

Now better known as Abed Nadir in Community, Danny Pudi started out in Yale, as one of Rory’s fellow newshounds at Yale Daily News. We can only imagine the let-down community college must have come as, after such an elite liberal arts background. 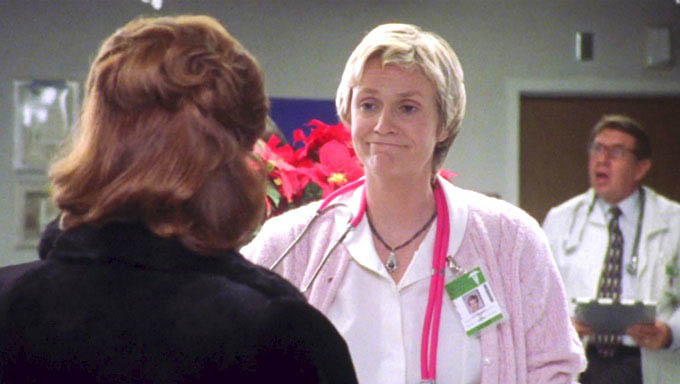 Long before making her name for herself as Sue Sylvester in Glee, Lynch plays Richard’s exasperated nurse in Forgiveness and Stuff, after he has a heart attack in the first season – a sad intimation, perhaps, of Richard’s ultimate fate. 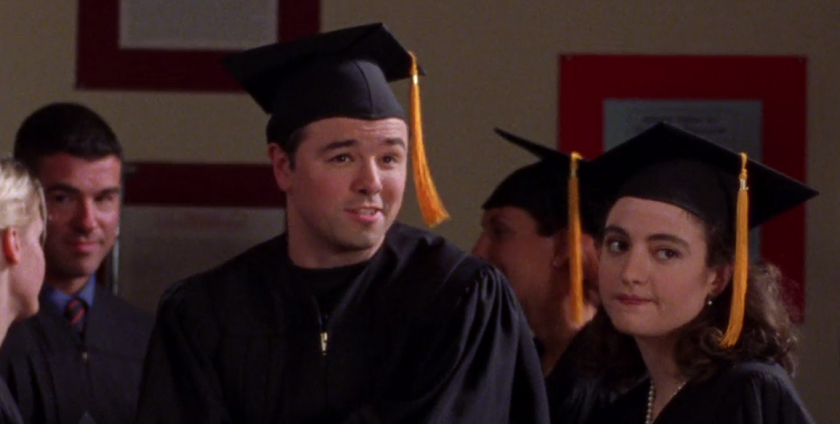 First appearing in Season 2, in an episode called Lorelei’s Graduation Day, MacFarlane later plays Emily’s lawyer in Season 3 episode I Solemnly Swear. In both episodes, he plays to type, as a wise-cracking asshole. 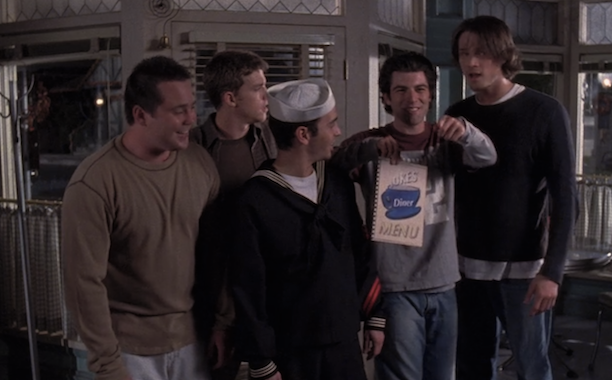 Greenfield, now synonymous with New Girl’s Schmidt, a part he seems born for, made an early appearance as Lucas in Season 4’s Chicken or Beef. One of Dean’s bachelor party attendees, it was a small role with only a few lines, and it was only his third credited TV part – he’d go on to Greek, Ugly Betty, Veronica Mars, before making his name in New Girl. 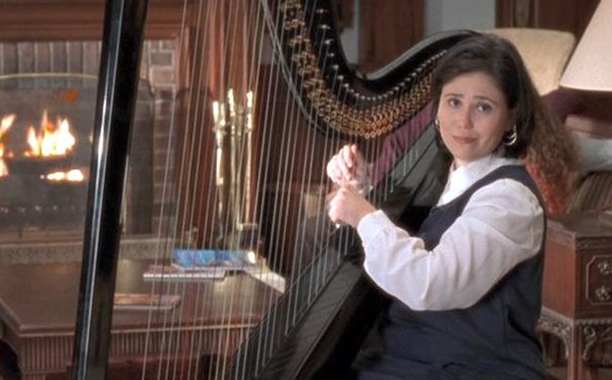 The voice of Family Guy’s Lois, who went on to appear in Shameless, was originally slated for the character of Sookie in Gilmore Girls’ unaired pilot. She wound up, instead, playing three different characters: Drella, the harpist at the Independence Inn; Miss Celine, Emily’s stylist; and the voice of Doris in Eight O’clock at the Oasis. 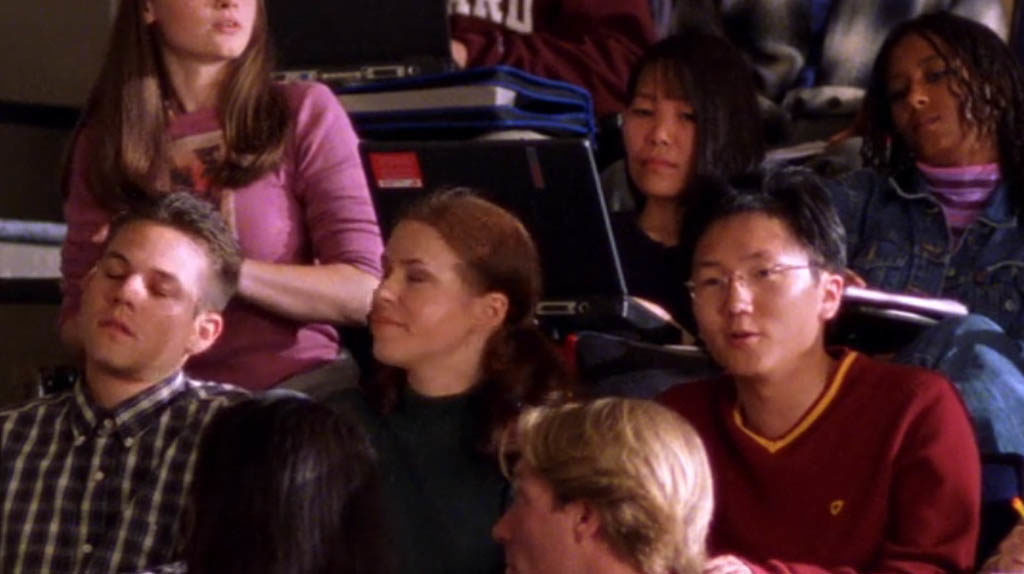 Oka was given an unnamed part as a student who debates Rory after she gatecrashes a lecture in Season 2’s Road Trip to Harvard, and went on to star in Heroes.

Now a former Superman, Routh had a part in Concert Interruptus, in which, with just one line, he manages to lure Louise and Madeleine away from a much-anticipated Bangles concert. 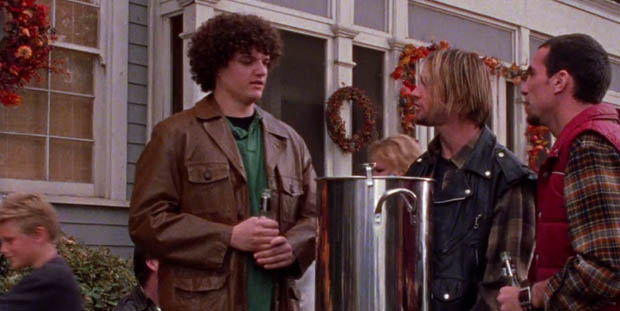 Badger from Breaking Bad played Morgan in A Deep Fried Korean Thanksgiving, in which, true to form, he deep-fries a whole turkey. 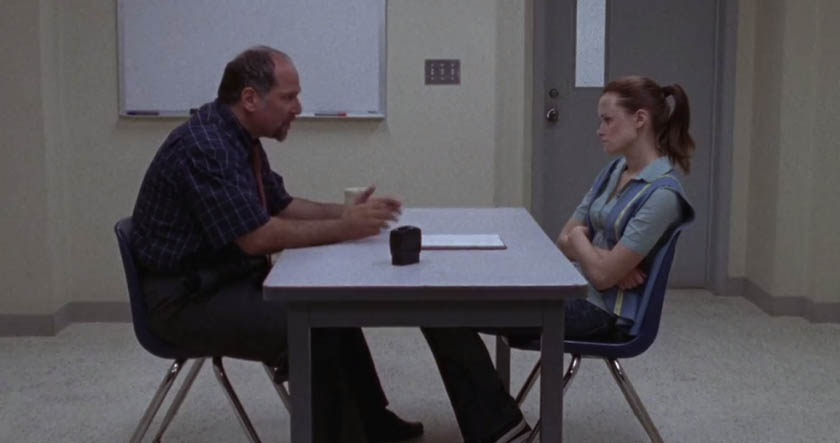 One of the wittiest cameos in a programme filled with witty cameos, the actor who plays the janitor in The Breakfast Club interrogates Rory in a nod to the John Hughes film, in Season 6’s Flight Face. 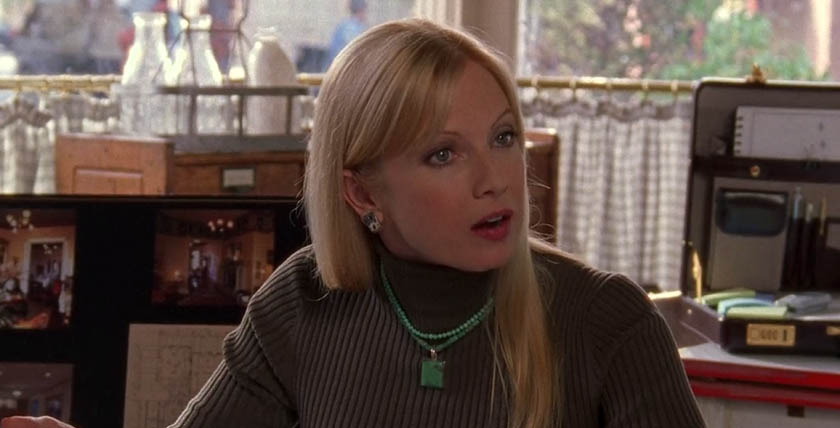 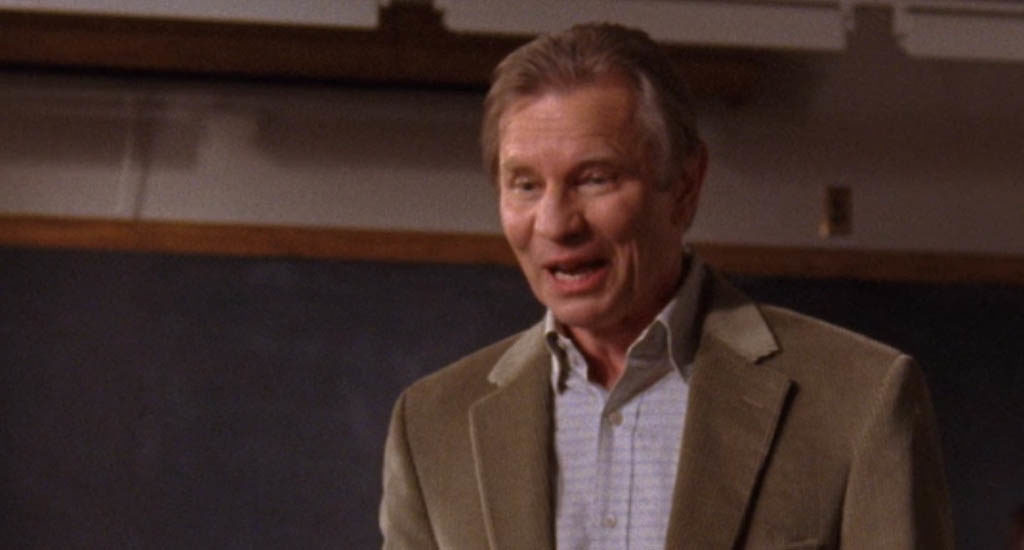 Things got a little bit creepy as Paris started an affair with the much, much (MUCH) older college lecturer Asher Fleming, the classical actor who first came to prominence in the 1970s. 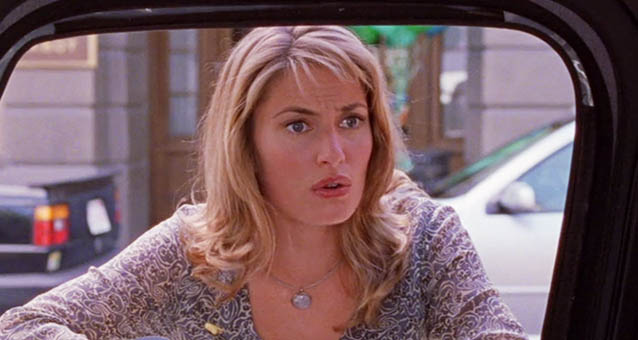 Twin Peaks’ first representative in Gilmore Girls is Amik, who played Sherry Tinsdale. While she only appeared in three episodes, she casts a long shadow as Christopher’s girlfriend and mother of their child Gigi. 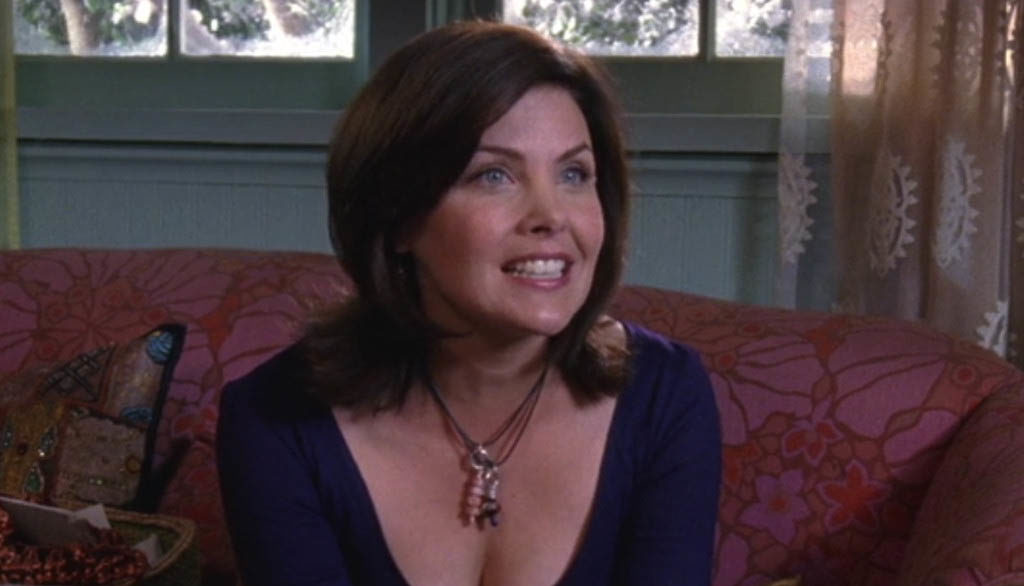 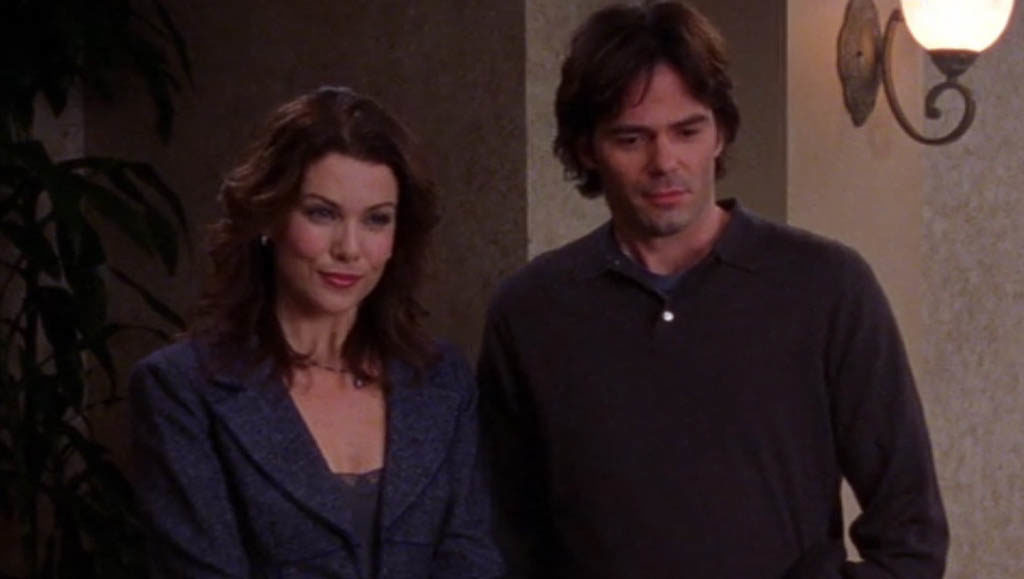 Now best known as Charlie Swan, Bella’s dad in the Twilight series, Burke played Alex, whom Lorelei dated for about three episodes, before he disappeared into the ether. 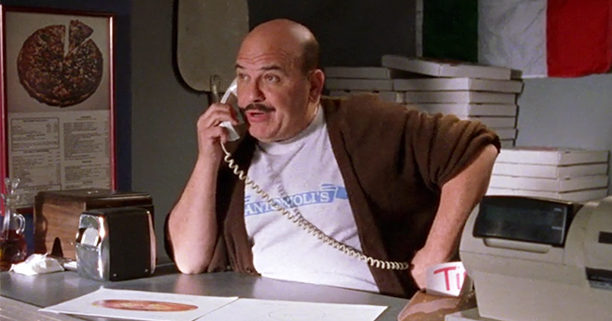 Having taken memorable parts in the Coens’ Miller’s Crossing and Barton Fink, and after staring in Homicide: Life on the Street, Polito’s appearances as Father in Kirk’s short black-and-white film masterpiece, and as Pete the Pizza Guy, were no less seminal. In the latter, he goes into partnership with Rory, in an attempt to create the biggest pizza ever, as a surprise for Lorelei’s birthday. It’s a part he was made for.

Gilmore Girls: A Year in the Life is now exclusively on Netflix UK, as part of an £9.99 monthly subscription. Seasons 1 to 7 are also available. 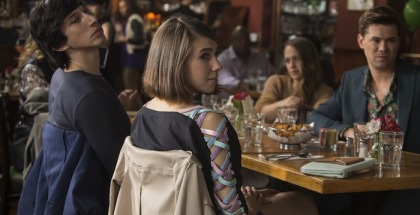