Netflix's stylish, dark, action-packed noir is the most cyber-punk story ever committed to television.

When the dust settles on the final act of Altered Carbon, one thing remains abundantly clear: this is the most cyber-punk story ever committed to television. From the aesthetic to the noir story and the archetypal characters, Altered Carbon ticks all of the right boxes. The result is a blockbuster sci-fi series that doesn’t necessarily break any new ground but does pay tribute to the genre in every moment.

The first episode begins with Takeshi Kovacs (Will Yun Lee), as this is a different Sleeve (the term for bodies that house “Stacks”, a piece of alien technology that essentially house a person’s soul) that Kovacs has procured, looking out over a neon city-scape, only to pre-empt a squad of special forces soldiers entering the room with some kind of visual augmentation. What results is an ultra-violent scrap, that leaves Kovacs’ female companion riddled with bullet wounds and the Stack at the base of her neck shot out, while Kovacs is taken into custody not to be re-Sleeved for another 250 years.

Just from these opening moments, we learn that those who associate with Kovacs, usually wind up like the poor woman from the planet Stronghold. There have been some arguments made that Joel Kinnaman’s performance is fairly wooden. However, he plays Kovacs as a narcissist from the off and gradually alters his performance to resemble that of the Kovacs seen in the flashbacks, where he is training to be an Envoy – a group of highly skilled operatives able to travel to different Sleeves across the galaxy. That Kovacs is morally upright and cares for those close to him – in particular, his younger sister, Reileen, who we discover Kovacs is very close with because of the abusive relationship they had with their father.

When it is revealed that Kovacs’ sister is the one behind Bankcroft’s murdered Sleeve, hiring Kovacs to investigate and essentially every other motivation that any of the main characters have, it’s a shocking revelation and it’s what makes Reileen such a terrifying character. Kovacs’ time spent with the Envoys made him a better person and helped him to move past his miserable upbringing, whereas Reileen has internalised her suffering and turned it into a warped logic that gives her a possessive need to control her brother.

In the same way, Martha Higareda’s Christen Ortega, a hard-boiled, Latino detective, may, at first, seem a little pastiche. However, this is where the pulpy nature of Altered Carbon is used to great effect again; Ortega stands between two worlds: the immortal, consequence-free world of policing a civilisation of Sleeves and the orthodox Catholic world in which she was raised. Ortega just wants to exist in this world; it’s why she’s one of the most appealing characters, because she just wants to do her job and be with her family, which, in a society where one’s body is inconsequential, is going against the norm. She occupies the middle space, but is pulled towards each end of the spectrum; religious belief can be coded into the Stacks to prevent followers being re-Sleeved, but she is also drawn to the technological world when she is given a prosthetic arm by Kovacs to save her life and, indeed, through her romance with him.

This is interesting because it is later revealed that Kovacs is the Sleeve of her former lover, and disgraced cop, Elias Ryker. This is because Bankcroft wishes to punish her for investigating him in connection to a murder that Ryker was investigating before his stack was imprisoned on a corruption charge; are Ortega’s affections are for Kovacs or just the face he’s wearing? By the end of the series, it seems that she is, in fact, a part of Kovacs’ family, which he previously had with the Envoys, making his scarred persona in the opening episodes relevant because they were taken away from him – by his sister, no less.

The other members of Kovacs’ family have interesting arcs too. Vernon Elliot and his wife, who is re-sleeved into a man’s body, have an interesting relationship. Poe, the A.I. that runs Kovacs’ hotel, diverges from the normal A.I. tropes in that he revers humans because they gave him life. But then, he takes the archetypal role of the detective’s faithful assistant, which he points out in a self-aware nod to the audience. Yet he also plays another interesting role as the character that mentally rehabilitates Elliot’s daughter, Lizzie. She is sexually assaulted prior to when the series takes place and is trapped in her Stack by her trauma. By interacting with her in virtual reality, Poe is able to rebuild her psyche, but she emerges in the final episode as a living weapon, stylishly decimating a security force holding her parents captive, set to high-tempo indie pop. It seems to suggest that however the mind is healed from trauma, the victim is forever changed.

Altered Carbon is full of more pulp than homemade orange juice, but it’s delivered in a vessel that is so engaging that the drink is delicious and refreshing. There are scenes that, were Altered Carbon not available all at once, would be the water cooler equivalent of the modern office where everyone has a giant water-skin by their desks at all times. The hotel lobby fight scene, the Envoy flashbacks, the entire VR torture episode, when Kovacs uses the pistol with magnetic bullets that return to the magazine, Ortega repeatedly beating the tar out of a room full of Reileen’s Sleeves, every time James Purefoy smiles… the list goes on.

With ratings that don’t quite Stack up (obligatory lore joke) with smash hits such as Stranger Things, it’s hard to say what the future of Altered Carbon is. There are some compromising themes that are dealt with a little heavy-handedly, but this seems to be in service of the narrative rather than ignoring them. Altered Carbon is based on a novel by Richard Morgan, and there are two more novels that could be adapted. The show ends with allusions to the alien race that built the Stacks and Kovacs heads off to find his great love and leader of the Envoys: Quellcrist Falconer (which sounds like the results of someone trying to find out their porn star name, but anyway). As Kovacs’ heads off into the metaphorical sunset, his new face isn’t shown. If Altered Carbon does return, it would be interesting to see Kovacs in a Sleeve that is entirely different from anything seen in the first season. Much like the Doctor in Doctor Who, Kovacs’ could be played by multiple actors, except they’ll have to portray the same character with the same personality.

Boasting a zero-gravity fist fight for the rich and a samurai showdown in a floating pleasure resort, Altered Carbon is the cyber-punk series that liberally covers all the tech-noir bases. It’s got a well-paced narrative spiced up by fantastic action, and while the characters are a little two-dimensional, it only adds to the dark, comic book feel of the show – it’s well worth a watch and potentially worth a re-Sleeve.

Altered Carbon is available on Netflix UK, as part of an £8.99 monthly subscription. 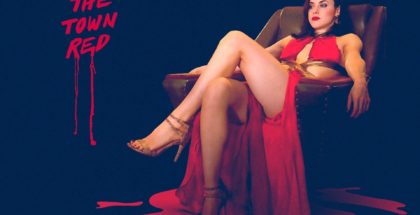