Superhero Sundays: The Best of Batman: The Brave and the Bold Season 1 | VODzilla.co | Where to watch online in UK

Superhero Sundays: The Best of Batman: The Brave and the Bold Season 1

The Caped Crusader teams up with lesser-known DC heroes for amusing adventures that are lighter in tone than other DC cartoons.

Created by James Tucker and Michael Jelenic, Batman: The Brave and the Bold ran for three seasons between 2008 and 2011. It’s based on the long-running comic of the same name, which focused on Batman’s team-ups with other DC superheroes, usually lesser known ones such as the Blue Beetle and Red Tornado, who both appear frequently.

The series is notably lighter in tone than other DC cartoons, with a much stronger focus on humour. This is reflected in the choice of costume, a bright blue mask and cape that effectively announces ‘None of your Dark Knights here, this Batman is all about pure, unadulterated comic book fun’. That’s not to say that The Brave and the Bold doesn’t have an emotional punch or two up its sleeve, but those moments are all the more effective for their contrast to the generally light-hearted mood.

On a similar note, the animation style is much more traditionally cartoon-like than other Batman shows, with an emphasis on colour and clear lines (several frames recall the work of the great Jack Kirby). With that in mind, the character designs lean towards the comics of the 40s and 50s, which has both its good points (Catwoman’s old-school purple costume) and bad points (a rather dull rendering of The Joker).

One big difference between Batman: The Brave and the Bold and other Batman cartoons (including the animated movies) is that Kevin Conroy (aka. The One True Batman) isn’t on voice duty this time round. However, Diedrich Bader does such a great job of sounding like the Kevin Conroy version that it’s fair to say viewers probably won’t notice unless they’re paying close attention.

There are a couple of other elements worth noting about the series. For one thing, it’s pretty much all Batman, all the time, to the point where Bruce Wayne never appears in the first season (even when Batman is without his mask, he’s in shadow) and is barely even mentioned. Secondly, none of the more established DC superheroes appear in the first season and, even when they do, it’s mostly the lesser-known versions of the character – e.g. a younger, cockier Green Arrow or the Golden Age version of The Flash (Jay Garrick). And finally, there’s an amusing running gag whereby any time Batman uses a vehicle that isn’t the Batmobile (be it Bat-plane, Bat-boat or Bat-bike), that vehicle usually ends up getting destroyed.

Between the superb animation, the exciting action sequences, the cheerfully comic book plots and the high levels of humour, there’s something worthwhile in every episode. Below, we’ve picked five of the best to give an overall flavour of Season 1 and we’ll be doing the same for the other two seasons.

Note: The episodes in Season 1 are mostly stand-alone stories, with the exception of the two-parter covered below.

Journey to the Centre of the Bat! (Season 1, Episode 9)

One of the best things about Batman: The Brave and the Bold (even before the Aquaman movie came out) was its decision to depict Aquaman as a pompous loudmouth, constantly proclaiming how great he is and decidedly more brawn than brain. (Even more perfectly, he’s voiced by John DiMaggio, who voiced Bender in Futurama.) This episode sees Aquaman teaming up with his tonal opposite, super-serious science genius The Atom (James Sie), and shrinking down to sub-atomic level to save Batman, after he’s poisoned by toxic supervillain Chemo. Aside from the fun Fantastic Voyage parody and the enjoyable bickering between Aquaman and The Atom, the episode also has Batman being the most Batman-like patient imaginable, disobeying The Atom’s orders to lie still, in order to fight Chemo on his own. Incidentally, if this episode leaves you wanting more Aquaman (and it will), you should also check out Episode 3 (Evil Under the Sea!)

(Note: every episode of the show has a cold open or teaser before the opening credits, usually a much shorter adventure with different guest stars. For this episode, the teaser features Plastic Man and Elongated Man fighting over which of them Batman likes best, as the three heroes team up to fight Baby Face.)

A fabulous two-parter that shows just how much fun you can have with an established universe and familiar characters, this begins with the mysterious Red Hood seeking help from other universes in order to fight the Injustice Syndicate in a parallel universe where all the heroes are villains (Batman is Owlman, Green Arrow is Blue Bowman, Blue Beetle is Scarlet Scarab, Red Tornado is Silver Cyclone, etc). In order to defeat them, Batman imprisons Owlman and goes undercover, infiltrating the Injustice League and teaming up with the Red Hood, who turns out to be The Joker (voiced by Jeff Bennett, who, sad to say, isn’t a patch on Mark Hamill). It transpires that all the usual Bat-villains are heroes in this universe, which makes the final fight very strange indeed. The second part has Batman returning to his own Earth to discover that Owlman has escaped, donned Batman’s costume and embarked on a crime spree, meaning that all Batman’s superhero friends are now trying to capture him. In desperation, Batman teams up with The Joker, partly because the existence of The Red Hood in the parallel universe has convinced him that there may be some good in his arch-nemesis after all. 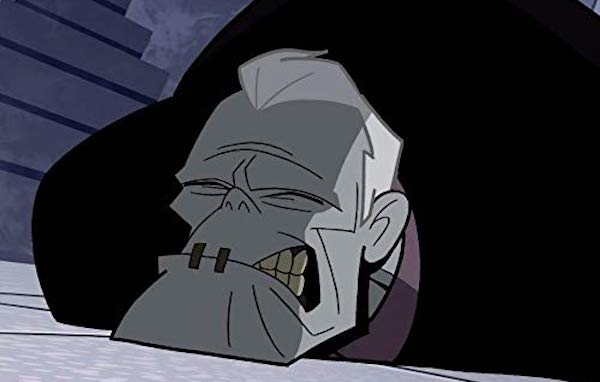 Prior to Episode 18, viewers might have been wondering what happened to Robin, especially since Batman occasionally exclaims “Teenagers!” in grumpy fashion, suggesting he’s had enough of them to last a lifetime. This episode answers that question, as we catch up with Robin (Crawford Wilson), who’s cheerfully fighting his own battles on the streets of Bloodhaven. The plot sees revenge-obsessed super-villain Crazy Quilt (voiced by Jeffrey Tambor) attempting to destroy Robin, because he blinded him in an earlier battle (seen in flashback). Batman turns up to help and Robin resents his intrusion, griping that he’s not a kid anymore and he can take care of himself. The episode finds new things to say about the hero / sidekick relationship and delivers some very funny gags in the process – Robin’s delivery of “Please, not the sidecar…” after his motorcycle is destroyed is laugh-out-loud funny. On top of that, the episode has a lot of fun riffing on the classic 1960s Adam West / Burt Ward TV show, recreating some of the famous sequences, as well as the climbing-the-building shot. The ending is very sweet too.

Whether by accident or design, both Marvel and DC created their synthetic android characters in 1968. DC’s Red Tornado, then, is the equivalent of Marvel’s Vision, and both characters have similar stories in the comics, focusing on what it means to be human and whether androids can have emotions. That’s pretty much what happens here, as a lonely Red Tornado (Corey Burton) builds a son named Tornado Champion (Carl Lumbly), who has the one thing he lacks: human emotion. Naturally, it all goes wrong and Batman is on hand to help out, as Tornado Champion becomes the Tornado Tyrant, after an encounter with super-villain Major Disaster and the dawning realisation that humans will never accept him. The ending is surprisingly moving, proof that this series can pack one hell of an emotional punch when it puts its mind to it.

Hands down the best episode of Season 1, and an absolute joy in its own right. In the tradition of the musical episode of Buffy the Vampire Slayer, this sees Batman facing off against the Music Meister – voiced by Neil Patrick Harris, because who else? – who has the power to control people by hypnotising them with music and making them burst into song. Those caught up in the fray include Aquaman, Green Arrow and Black Canary (Grey DeLisle), as well as sundry super-villains. The songs – with lyrics by showrunners Tucker and Jelenic – are so good that you’ll immediately want to watch the episode again, and they even work in a terrific love triangle subplot that sees Black Canary falling in love with Batman, while Music Meister falls in love with her. Best of all is a show-stopping gag about Batman’s surprisingly impressive singing voice, although we won’t say when it appears. A must-see, even if you have no intention of watching the rest of the series. And yes, the live-action version of The Flash “borrowed” both the villain and the concept for its Season 3 musical episode “Duet” in 2017.