Netflix UK film review: Ideal Home | Where to watch online in UK | How to stream legally | When it is available on digital | VODzilla.co 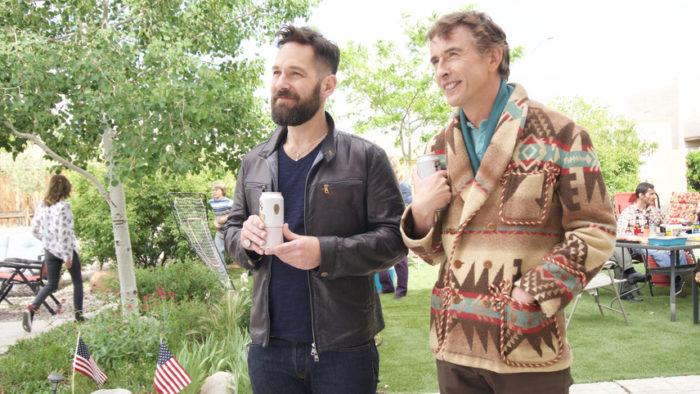 Steve Coogan and Paul Rudd are surprisingly adorable in this very funny comedy.

Steve Coogan and Paul Rudd make a terrific comic duo in this charming and funny comedy from writer-director Andrew Fleming (The Craft, Dick). Set in New Mexico, the film stars Coogan as Erasmus Bumble, a successful TV chef who works alongside his long-time (and long-suffering) partner-slash-producer Paul (Rudd, sporting an impressive beard) on their cooking show, Ideal Home. Despite their near-constant bickering, the pair have obvious affection for one another, but their relationship is nonetheless tested by the arrival of Angel (Jack Gore), the 10-year-old grandson Erasmus never knew he had.

The plot is entirely guessable from the moment floppy-haired Angel first appears, right down to a visit from social services (Alison Pill) and the eventual reappearance of Angel’s jailbird father (Jake McDorman). However, the story is of secondary importance – what matters here is the comic chemistry between Coogan and Rudd and the fact that the sharply written script delivers several big laughs.

Coogan is delightful as Erasmus, and he gives what is probably his funniest non-Partridge performance to date, although that’s probably because there’s an awful lot of Partridge in it. Erasmus’ off-the-scale self-absorption and narcissism certainly have a familiar air to them – typefied by an early exchange where a blind-sided Paul exclaims “You have a grandson?” and Erasmus replies, “It’s unbelievable, isn’t it? I mean, look, I’ve had no work done”.

Comedically speaking, Rudd is very much the straight man to Coogan, but he’s equally impressive and his exceptional comic delivery, coupled with his command of a sardonic comment, ensures he still receives his fair share of the laughs. Crucially, the pair are entirely believable as not just a couple, but a couple that have been together a very long time, and, as such, there’s genuine emotional investment in their relationship on the part of the audience.

The third part of the equation is Gore, who judges his performance perfectly as the troubled kid forced to live with two men he’s never met before. To that end, the gradual bond he develops with both Coogan and Rudd is extremely touching, and forms the emotional heart of the film. In addition, that central relationship is all the more affecting for Gore not being the super-cute, straight-from-central-casting type – there’s a mixture of toughness and vulnerability to him that works well.

Fleming, who directed Coogan a decade ago in the underrated Hamlet 2, has an ear for comic dialogue and is adept at orchestrating a comedic set piece, most notably a very funny sequence involving Erasmus and Paul talking to Angel from behind a closed door, after he’s interrupted them, mid-coitus – the punchline is the title of a film and Coogan’s delivery of the line is worth the Netflix click alone.

It’s fair to say that the film occasionally leans into some fairly dated stereotypes, but that’s not really an issue in context and there’s no question that the film’s heart is in the right place, as evidenced by an eye-dampening montage of real-life gay parents that plays during the closing credits.

Ideal Home is available on Netflix UK, as part of an £9.99 monthly subscription.

Where can I buy or rent Ideal Home online in the UK?