UK TV review: The Highway Rat | Where to watch online in UK | How to stream legally | When it is available on digital | VODzilla.co 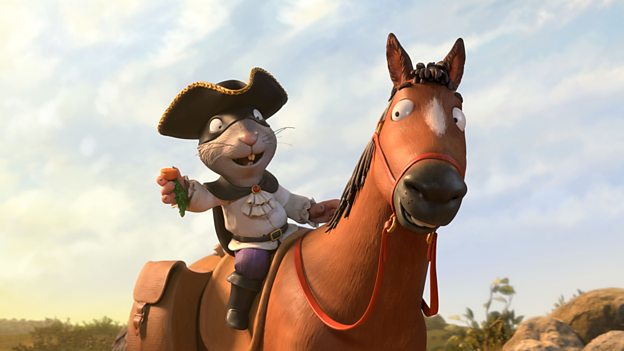 This short but sweet adaptation of the Julia Donaldson and Axel Scheffler book is a tasty family treat.

Turkey. Presents. Trees. Arguing over Monopoly. There are some things it’s just not Christmas without. In recent years, that list has grown to include one particular festive treat: the BBC’s latest adaptation of a book by Julia Donaldson and Axel Scheffler. From The Gruffalo and Gruffalo’s Child to Stick Man, the 30-minute shorts are wonderfully charming slices of humanity and humour. 2017’s The Highway Rat is no exception.

First published in 2011, the book charts the adventures of a ravenous rat who craves buns, biscuits and all sweet things. “Give me your pastries and puddings! Give me your chocolate and cake! For I am the Rat of the Highway, and whatever I want I take!” he cries, with a drool of his tongue and a swish of his sword.

He’s the kind of dubious character you can imagine winning you over with a roguish charm, so it’s a joy to discover that the film stars David Tennant as the greedy grifter. He bellows his lines with his loud Scottish lilt, fusing that nasty streak with a rapscallion glee. He’s joined by the sort of talent many filmmakers would dream of: crossing his path during his 30-minute reign of terror are Nina Sosanya as a Duck, Tom Hollander as a Squirrel and Frances de le Tour as a Rabbit – and the whole thing is narrated with gentle wit by Rob Brydon.

Hearing Donaldson and Scheffler’s text read aloud by such voices would be enjoyable enough by itself, but the visuals by Magic Light Pictures elevate the whole thing. Now on their fifth interpretation of a Donaldson/Scheffler title, they’re almost inseparable from the source material, bringing to life the illustrations with a simple colour palette that disguises all manner of magical textures and gorgeous depth; they boast that rare quality of feeling tangible and tactile, which is all too fitting for a picture book adaptation.

Those visuals allow the film to heighten the dark extremes of the story, as the Rat is lured into a cave to enjoy all manner of lip-smacking goodies. But, equally, they allow the film to sell a more moral version of the tale’s resolution, as his caving experience prompts a change of behaviour in the Rat. There’s a powerful simplicity in that Scrooge-like fable, capturing a whole character’s emotional journey in just 30 minutes. The Highway Rat is short but, like the morsels its eponymous animal sniffs out and tidies away, it’s delightfully sweet. If you haven’t yet tasted the goods, gobble the whole thing up this instance.