Once Upon a Time in Stratford

Bill (Creed-Miles) has just got out of prison. Returning home to Stratford, he finds his old gang members grown up, his wife in Spain, and his kids home alone. Social services aren’t too happy about that, so Bill is stuck there struggling to get back on the right side of society. His sons – and the local drug dealers – aren’t happy about that either.

Gangs? Drugs? Prison? Wild Bill might sound like your typical cockney crime movie, but it’s far from it. Director Dexter Fletcher sets his drama in a similar world to all the other Brit gangster flicks, but this is one filled by actual characters, not stereotypes; people talk to each other about their problems rather than shooting and swearing their way out.

At its heart, Wild Bill is the story of a guy trying to go straight, and the cast really know how to sell it. Bill’s two boys are vulnerable but angry, with Will Poulter’s independent youngster really standing out. “I didn’t leave home. Home left me,” he says, staring down the veterans around him with the impressive screen presence he showed in Son of Rambow.

Other familiar faces pop up too. Andy Serkis brings some menace to the underworld, Marc Warren’s uncredited drunk is a suitably poignant figure, while Jason Flemyng does a lot with a brief stint as a social worker. But for all the threatening thugs around town, Danny King’s co-written script keeps things focused on Bill’s domestic life. Small gestures such as getting a takeaway (or ordering a sex worker) carry enormous emotional weight, and big moments, such as a moving rooftop exchange with Sammy Williams (Attack the Block’s Probs), are beautifully underplayed. Credit should also go to Liz White and Jaime Winstone, whose convincing characters offer more than mere romantic interest, as well as helping to soften Bill’s gruff exterior.

Events all take place in the shadow of the 2012 Olympics. Sunset-tinted building sites and nighttime panoramas create a look and atmosphere that almost borders on the intensity of a Michael Mann film. And, as Creed-Miles’ likeable outsider stands off against the outlaws to find a place in his hometown, Dexter Fletcher’s directorial debut takes on the personality of a highly mature Western. Once Upon a Time in Stratford? You wouldn’t be far off.

Sadly, that unexpectedly gentle tone left people uninterested after the movie’s marketing campaign presented Wild Bill as Lock Stock 2 or Layer Cake 3. With the movie now available to stream in the UK, hopefully it will connect with the wider audience it deserves.

Wild Bill is available on Netflix UK, as part of an £9.99 monthly subscription.

Where can I buy or rent Wild Bill online in the UK?

450 years on: Shakespeare in the on-demand age 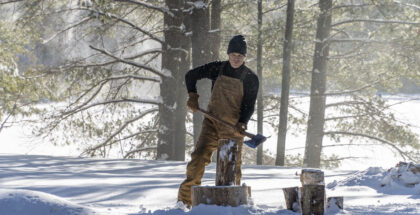