Aliens: A sci-fi film that should've won the Oscar for Best Actress | VODzilla.co | Where to watch online in UK

Aliens: A sci-fi film that should’ve won the Oscar for Best Actress 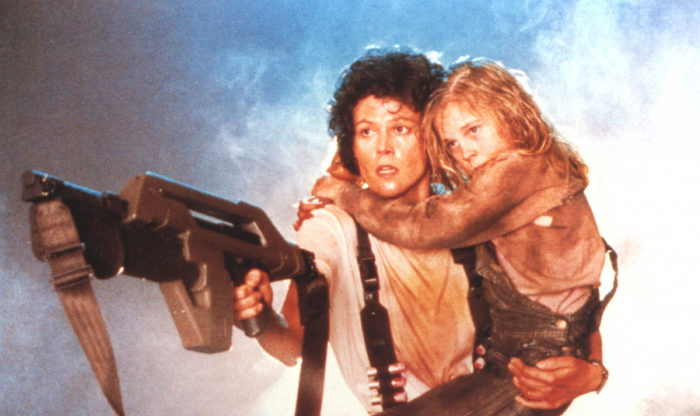 Bigger, bolder and beautifully emotional, James Cameron's sci-fi is one of the greatest sequels ever made.

With Alien: Covenant out in the UK, our Alien Retrospective looks back at the original Alien films, plus where you can watch them online.

In 2017, Arrival was nominated for eight Oscars. It was a surprising, momentous achievement – not least because one of the last science fiction movies to get such an impressive haul of Academy Award nods was Aliens, way back in 1986. It was almost as big a gap between Ridley Scott’s original and James Cameron’s sequel, which didn’t appear until a sizeable seven years after Alien. Reintroducing Sigourney Weaver’s Ripley, survivor of the first film, it saw her go head to head with her fears – and, come the jaw-dropping climax, fist to fist. It was a performance so striking that Aliens did something Arrival didn’t: alongside its clutch of technical awards, it earned an Academy Award for Best Actress.

Seals of approval don’t come much higher than that for sequels, and make no mistake: James Cameron’s Aliens is one of the greatest sequels of all time. It’s a follow-up that manages to respect and pay homage to its predecessor, while transforming it into something entirely different – a tribute, continuation and, in some ways, an elevation of an already perfect masterpiece. Cameron, who was fresh off The Terminator, was given the green light to take the helm of the project in 1984, after he was commissioned to create it based almost on the quality of his Terminator script alone. He was a young, imaginative, ambitious filmmaker, and that drive and enthusiasm are evident in every shot, as he reaches for new galaxies with the kind of scale you’d expect from Star Wars, but not from the child of a stripped-down, claustrophobic survival thriller.

Cameron is smart enough to create some distance between him and Scott: he sets his story 57 years after the events on the Nostromo, with Ellen Ripley in cryo-sleep. When she’s woken up, she finds herself in a scary new world, one where everything has changed, but some things haven’t: the Weyland-Yutani Corporation is as ruthless and stupid as ever. The problem? They’re more powerful too, rounding up a whole heap of marines to go to the planet LV-426, where they’ve since founded a colony that’s slowly terraforming the planet. Ripley makes it clear to them how dangerous an errand it is, reeling off an account of the first film – and straight away, Cameron is weaving a deceptively complex narrative, one that manages to give his audience all the exposition they need to catch up, while framing the story as one of a strong woman battling to overcome her deepest horrors.

It’s only fitting that, as she goes back to the site of her trauma, it should be bigger and more daunting than before. The scale, again, is the thing, and Cameron’s scale is amazingly well-conceived and absurdly well-realised. Even the title by itself is a bold statement of intent: you thought one Alien was scary? Try a dozen of them.

Expanding the franchise’s horizons also applies on the human front, and after the small band of Nostromo victims (all glimpsed in photos for maximum emotional weight during Ripley’s initial presentation), Aliens doesn’t skimp on the potential dead bodies: from Bill Paxton as Private Hudson to Michael Biehn as reluctant hero Corporal Hicks, the group of soldiers are the very definition of motley, spouting witty dialogue at each other in a way that manages to be both cheesy and convincing. There’s a camaraderie on screen that’s reinforced by the presence of the outsiders accompanying them: Paul Reiser as the wonderfully shifty company man Carter Burke (constantly working to capture and take the Alien safely back to Earth for nefarious scientific purposes) and Lance Henriksen as android Bishop, as still and composed as Ian Holm’s Ash, but with a disarmingly likeable thin-lipped smile.

Biehn and Paxton were both veterans of Cameron’s Terminator, almost visibly bringing with them the scars of conflicts past. The movie wears such influences on its sleeve. Brash young troops sent into alien territory to fight an unknown enemy without training, equipment or warning? The Vietnam War looms large at all times, not just because Cameron had recently penned the script for Rambo: First Blood Part II – and there’s a sense in their over-the-top banter and macho confidence that they’re not just genre cliches, but soldiers living up to the dream of war as it’s been sold to them.

“This time it’s war,” promises the poster with an ominous sense of doom as well as excitement. And excitement is certainly the word for it: the moment the team touch down on the planet, it’s an almost non-stop barrage of set pieces, from the opening encounter, which sees Ripley crash an RV to get the soldiers out of a sticky situation, to the hordes of aliens quietly advancing through the air ducts of the colony. It’s an action movie as much as a horror movie, a bold change of register that Cameron pulls off with aplomb, all part of his ability to enhance the legacy of the first film without treading on its toes. The result was a hit, one that was no less influential: if Alien was the definitive sci-fi horror, Aliens is the definitive sci-fi action blockbuster.

Cameron’s vision is every bit his own and he brings an auteur-like approach that recalls the way Ridley’s original was so precisely prefect. The changes are apparent everywhere, beginning with the replacement of HR Giger in the design department with Terminator and future Jurassic Park wizard Stan Winston. He retained and evolved Giger’s creepy creature design, helping Cameron to make something that could practically move quicker and sustain heavier blows, not to mention overseeing the production of the Alien Queen, a life-sized piece of puppetry that is mind-boggling even in the behind-the-scenes footage that accompanies Aliens’ extended Special Edition. Cameron bathes everything in blue light, as you’d expect, but still manages to keep up Scott’s aesthetic of a battered, worn-down future: a retro time-to-come that was full of angular corners and chunky vehicles.

It’s in those small details that you realise he’s the perfect man for this job. He may be known for Titanic and Avatar these days, but Cameron’s grasp of horror is as assured as Scott’s, able to drum up tension and dread at the same time as pumping adrenaline into your eyeballs. Some of that is logical escalation: the corridor tracking shots are still there, to some degree, but now, the aliens are both above in the vents and below in the watery sewers. Some of it is expert editing and, in a similar tradition to the first film, judicious use of sound and James Horner’s score: one stand-out sequence sees our heroes hiding behind a wall of automated sentry guns. Rather than see lots of shots of prosthetics being shredded by bullets, Cameron keeps things tightly closed upon the computer displays on the guns, leaving us to count down the ammo available just as intently as the main characters. All the while, blue dots on a sensor tell them where the aliens are located – and those blips keep on moving closer. It’s a masterclass in tension, relying on what we don’t see to keep us on the edge of our seats. Not bad going for a scene that mostly revolves around really cool, really loud guns.

But Aliens secret to success lies in Ripley herself – and Cameron develops our heroine with a beautiful, gripping sympathy. With the first film so heavily themed around birth, Cameron focuses on the aftermath, on the building of a family, and (in the Special Edition) starts that with the most horrifying thing of all: a mother discovering that she’s lost a child. Waking up after her hyper-sleep, Ripley is told that, with 57 years gone, her daughter has already passed away, meaning that Ellen’s missed her chance to reconnect altogether.

It’s her meeting Newt on LV-426 that offers a chance of catharsis, as the young girl emerges as the last member of the slaughtered colony. Carrie Henn, who has surprisingly never appeared in another film, is wonderful as the resilient orphan, hiding away in the corridors with nothing but a severed plastic doll’s head for company. Both her and Ripley are toughened survivors, each eager to find some support and company in the other. It’s a relationship that Cameron (who explores similar themes of parenthood in Terminator 2) captures with heartbreaking sincerity.

“They mostly come at night, mostly,” Newt tells Ripley, as the surrogate mother tries to comfort the girl. She could be talking about real monsters or nightmare monsters – because, here, what’s the difference? Later, Ripley tries to respond with her own equally powerful observation, as she holds up the doll and suggests Newt should be more like her: emptying her mind to not have bad dreams. “Ripley, she doesn’t have bad dreams, because she’s just a piece of plastic,” comes the sardonic reply, packed with wisdom beyond Newt’s years.

It’s the best scene in the whole movie, as we see Ripley softening and Newt toughening up, both breaking down emotional barriers that they haven’t been able to let crumble before: after the events of the first film, and even before them, as part of a mostly male crew, Ripley was, in a way, training herself to be as emotionless as that doll. Now, she’s becoming more human. Sigourney Weaver plays it magnificently, managing to underlay that bad-ass attitude with a tender, sincere affection, extending an already deep subtext of motherhood, life and death into a moving, hopeful story of family and connections. The scene leads directly into one of the scariest confrontations too, as not one, but two facehuggers try to kill them both – escalation and emotional development in one blow? Cameron’s storytelling has never been better.

It culminates, of course, in that iconic showdown between a yellow, metallic Power Loader and jet-black, domed Queen, a bout that sees Ripley rescue one pseudo-daughter by having to destroy the Xenomorph’s own offspring. It’s a thematic return to the conclusion of the 1979 story, taking us full circle to a woman emerging out of trauma to go into hyper-sleep. This time, though, she does it with a newfound daughter.

It’s that journey that gives Aliens its epic feel, a natural, nuanced arc that spans decades and generations – while also allowing for some serious gun-toting action. Without Weaver in the role, it simply wouldn’t work. Even the Academy, still so afraid of recognising science fiction in 2017, realised the importance and power of her work. Aliens didn’t just deserve that Oscar nomination for Best Actress: it should’ve won it.

Aliens is available on Sky Cinema. Don’t have Sky? You can also stream it on NOW TV, as part of a £11.99 Sky Cinema Month Pass subscription.

Where can I buy or rent Aliens online in the UK?

Full trailer lands for Orange Is the New Black Season 5

Prometheus: A fascinating prequel with the wrong main character... May 16, 2017 | Ivan Radford