VOD film review: Star Trek Into Darkness | Where to watch online in UK | How to stream legally | When it is available on digital | VODzilla.co

This fun but familiar sequel boldly goes where we've already been before.

When J.J. Abrams seized the helm of the USS Enterprise in 2009 and kicked it into reboot gear, he wowed everyone by producing a film that had one warp coil in tradition and the other in a 21st Century blockbuster; an agile machine that jumped over itself to blaze a new direction for the franchise. Star Trek Into Darkness takes that mandate and boldly goes… where we’ve already been before.

From the opening frame, things are running at top speed – literally. Fleeing from natives, stopping a volcano and saving a key crew member, Star Trek Into Darkness sets the tone and pace early, introducing the film’s key themes of sacrifice, politics and running really quickly.

Inevitably, Starfleet strips James Kirk (Pine) of his command for being reckless. And so the immature man strives to become a better captain while the half-human Spock (Quinto) tries to become a better friend; a task made even more pressing when they’re ordered to hunt down John Harrison (Cumberbatch), a terrorist who launches an attack on London.

It’s a strong set-up that gives Into Darkness plenty of room to squeeze in character time between explosions. And Abrams is a dab hand at doing it: Zoe Saldana’s Uhura bickers with Spock while dodging bullets; Quinto’s conflicted frowns flesh out notions of romance and fear; and Karl Urban’s Bones grumbles with the best of them. For the opposing team, Benedict Cumberbatch is deliciously ambiguous as Harrison, a menacing icicle wrapped in black leather. Even more impressive, though, is Chris Pine, who goes toe-to-toe with his theatrical nemesis, managing to balance that cocky swagger with real hints of weakness and pathos. More nuanced than Shatner, Pine has Harrison Ford levels of charisma hidden underneath those eyebrows and his hugely likeable Kirk really lets him flaunt it.

Abrams’ ensemble are as well realised as the world around them – from London’s The Shard-filled cityscape to the sexy yet retro costumes, it’s a spectacular blend of series past and universe future, united under the director’s lens flared vision. But unlike 2009’s elaborate origins story, screenwriters Roberto Orci, Alex Kurtzman, Damon Lindelof here put too much weight on what’s gone before.

The premise goes from clever to clever-clever as references to earlier Treks take over the story, leaving the script to rush through plot holes and cameos to line up the next familiar nod. Alice Eve’s Dr. Carol is the main victim of the approach, a sadly shallow Basil Exposition whose only other function appears to be providing some bra and panties for Kirk to look at. Harrison’s motivations, meanwhile, are soon lost in Hollywood’s favourite asteroid belt of clichéd bad guy plans.

It’s never dull, though. Everything is assembled at a cracking speed, yet there’s something vaguely disappointing about the whole endeavour; at once both breathtakingly creative and oddly unimaginative. The cast’s chemistry makes the climax moving, but with no time to pause, no sense of jeopardy ever intrudes. The set pieces are efficient but, apart from one ingenious chase sequence, fail to stick in the memory. (One shootout – with guns – feels more Starship Troopers than Star Trek.)

Instead of whooping, you’ll be left with a lingering question: after forging such a promising parallel sandbox for the series to roll around in, why spend playtime reliving former triumphs rather than banging together doo-dahs and wotsits and coming out with time continuums and rainbow-coloured ponies? As Star Wars Episode VII lines up its usual crew, can the rebooted Star Trek pay tribute to old canon but still move on to pastures new? The first outing was a bold “Yes, we can”. Its sequel, torn like Quinto’s confused Spock, sounds more like a “can’t”.

Into Darkness may not be a series classic, but the relentless spectacle and character-driven jokes make sure this trek flies by all the same. If Abrams’ last Star Trek was a sleek, well-oiled engine, Into Darkness is an old-school adventure turned into a modern rollercoaster; fun, but rickety.

Star Trek Into Darkness is available on All 4 until 18th January 2021.

Where can I buy or rent Star Trek Into Darkness online in the UK? 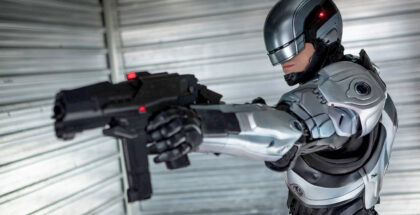