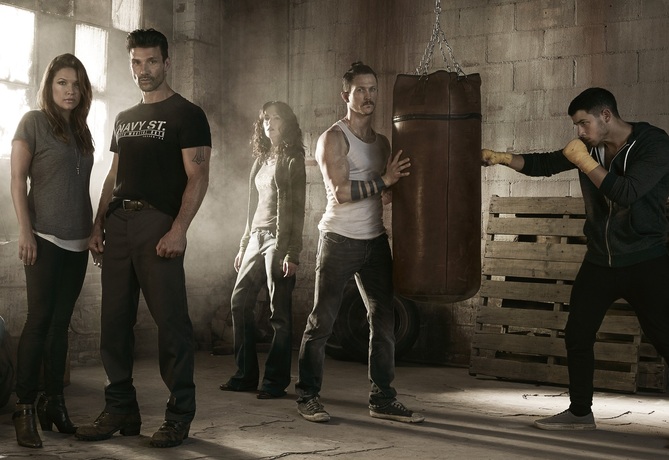 Virgin Media is boosting its VOD TV line-up with the US show Kingdom.

The broadcast has acquired the exclusive UK rights to the series from Endemol Shine, with customers able to watch it on-demand from 1st April 2016.

The show, created by Byron Balasco, is a family drama set in Venice, California, against the backdrop of the renegade subculture of Mixed Martial arts. Frank Grillo (Captain America) leads an ensemble cast as Alvey Kulina, an MMA legend and owner of Navy St. MMA gym. Kiele Sanchez (Lost) co-stars as Lisa Prince, Alvey’s girlfriend, alongside Matt Lauria (Friday Night Lights) as Ryan “The Destroyer” Wheeler, the world-class athlete who had it all, including Lisa, until his spiralling drug addiction landed him in prison. Jonathan Tucker (Justified) joins them as Jay Kulina, Alvey’s eldest son, while Nick Jonas plays Nate, Alvey’s youngest son and the prized fighter at the gym, and Joanna Going (House of Cards) plays Christina, Alvey’s estranged wife and mother to Jay and Nate.

Natalie Martinez (Secrets and Lies) joins as a series regular for Season 2 as Alicia Mendez, an impulsive but skilled female fighter. who is training at Navy Street MMA Gym.

The announcement bolsters Virgin’s on-demand offering, after the company became the exclusive UK home for Starz’ Ash vs Evil Dead, which premiered on Virgin’s set top box as a streaming box set last December. Virgin will adopt a similar strategy for its new VOD show, with the first six episodes available for Virgin Media TV XL customers to watch from Friday 1st April, with a new episode then released weekly. The final episode of Season 1 will be released alongside the first episode of Season 2, joining both seasons together. In total, the deal covers 30 one-hour episodes, which would also include the 10-episode third season set to premiere in the US this year.

David Bouchier, Chief Digital Entertainment Officer at Virgin Media, says: “When choosing our exclusive programmes we look for edgy, immersive stories with exciting talent, a strong genre and characters with real depth. We want to bring our customers something distinctive which they won’t otherwise see on British TV. Kingdom ticks all of these boxes and I know our customers are going to love it.”

Cathy Payne, Chief Executive of Endemol Shine International, adds: “ESI are thrilled that Virgin Media are bringing Kingdom to the UK audience. We are confident Kingdom will be embraced by viewers here in the UK as is has across the USA, Canada, Australia, France, Germany and Latin America, to name a few of the territories where the series has built a strong following.”