Netflix renews Travelers for Season 2 | Where to watch online in UK | How to stream legally | When it is available on digital | VODzilla.co

Netflix and Canadian broadcaster Showcase have renewed Travelers for Season 2.

The original time-travelling thriller, which stars Will and Grace’s Eric McCormack, premiered last year on the streaming service, following its debut on the channel in Canada.

Created by Brad Wright (Stargate SG-1), it follows FBI agent Grant MacLaren (McCormack), who leads a team performing missions across time to save humanity from a terrible future. Many centuries into the distant ether, the Earth’s population has dwindled to almost nothing, but the survivors have discovered the key to time travel. And so a group enters the 21st century on a mission to avert disaster, at the risk of erasing themselves from history.

“The result isn’t hugely original, but it’s intricate and quick enough to be entertaining; think Quantum Leap with guns,” we wrote in our review of the first half of Season 1. “That balance is deftly maintained throughout the opening episodes, introducing threats as big as antimatter and as mundane as blackmail from suspicious people wanting gambling tips in exchange for silence. If we’re left wondering where all this is heading, it’s because the script does the same to the characters.”

“I’m as proud of Travelers as any show I’ve ever been part of,” McCormack said in a statement. “And I’m blown away by this extraordinary young cast as any group of actors I’ve ever worked with. That the entire team is Canadian is icing on the cake, which makes my friend, Brad Wright, the cherry on top.”

Season 2 will pick on the group’s realisation that their missions may be altering the future in ways they did not predict.

Its renewal was announced at a press event held by Netflix in New York, where it promised “the biggest and most diverse slate in Netflix history” in 2017, with more than 1,000 hours of new series, films, stand-up specials and documentaries.

“We aren’t in the business of creating ‘one size fits all’ programming, or building slates to fill a finite number of hours of a programming grid,” said Ted Sarandos, Chief Content Officer at Netflix. “We’re catering to a dynamic world full of people with different tastes – and as a result, no two Netflix experiences are alike – we want to have something for everyone to enjoy.”

“Humanity’s been all but wiped out. We’ve come back to change that.”

That’s the sound of Travelers arriving on Netflix just in time for Christmas. Because nothing says “happy holidays” quite like a science fiction thriller about the end of the human race.

A co-production between Showcase and Netflix, this Canadian series stars Eric McCormack as FBI agent Grant MacLaren, who leads a team performing missions across time to save humanity from a terrible future. Many centuries into the distant ether, the Earth’s population has dwindled to almost nothing, but the survivors have discovered the key to time travel. And so a group enters the 21st century on a mission to avert disaster, at the risk of erasing themselves from history.

All episodes of the show arrive on Netflix on Friday 23rd December.

Production had started this week on Netflix’s on the new original sci-fi series, Travelers.

Shooting on location in Vancouver, the time-traveling drama is produced by Peacock Alley Entertainment Inc., in association with Showcase and Netflix. The series is hundreds of years from now, when the last surviving humans discover the means of sending consciousness back through time, directly into people in the 21st century. These “travelers” assume the lives of seemingly random people, while secretly working as teams to perform missions in order to save humanity from a terrible future.

Armed only with their knowledge of history and an archive of social media profiles, the group discover that 21st century lives and relationships are as much a challenge as their high-stakes missions.

The series is written, created and produced by WGC and Gemini Award winner Brad Wright, co-creator of the Emmy Award nominated Stargate SG-1 and creator of related franchises Stargate: Atlantis and SGU. The pilot is being directed by Nick Hurran (Sherlock), with Canadians Andy Mikita (Lost Girl), Helen Shaver (Vikings), Martin Wood (Killjoys), Will Waring (Continuum), and Amanda Tapping (Continuum) all tapped to direct episodes in the inaugural season.

“My old friend Brad Wright has created a fantastic, complex story with some very rich and complicated characters, and I’m awfully happy to be one of them,” says McCormack.

“We’re thrilled to be working with Showcase and Netflix and are so proud that Travelers was originally developed at the CFC Prime Time TV Program with Canadian writers,” adds Wright. “We’re excited to work with this amazing cast led by Eric McCormack. It’s all a dream come true for a Scarborough boy like me.”

Travelers will premiere exclusively on Netflix outside of Canada, everywhere the service is available, later this year. The series will debut on Showcase in Canada.

UK TV review: Supergirl Season 2, Episode 10 (We Can Be Heroes) 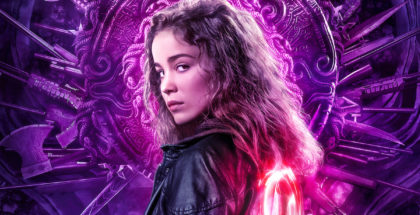