Written by, directed by and starring the comedian, the film is a remake of the French comedy of the same name and will premiere on Friday 29th April.

Gervais posted the trailer on his YouTube channel, telling Variety: “I think Netflix will see the return of the auteur to moviemaking. Zero interference and a guaranteed audience. Perfect.”

The film, which stars the British comedian and Eric Bana, is written and directed by Gervais. It follows a struggling New York-based radio journalist, whose arrogance and decadent lifestyle has hindered his career. With his job on the line, he fakes front line war reports from the comfort of his hideout above a Spanish restaurant in Queens.

The talent in front of the camera is even more impressive, with Correspondents’ ensemble including Vera Farmiga (Bates Motel, Up in the Air), Kelly Macdonald (Boardwalk Empire, Brave), Kevin Pollak (The Usual Suspects, Casino), America Ferrera (Ugly Betty, How to Train Your Dragon), Raúl Castillo (Looking, Cold Weather), and Benjamin Bratt (Modern Family, 24: Live Another Day).

The movie will premiere worldwide exclusively on Netflix on Friday 29th April. Here’s the trailer: 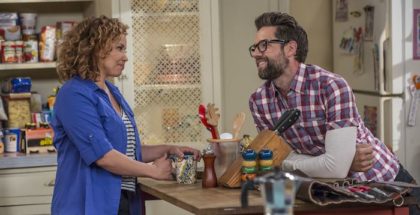