Trailer: The New Pope set for January release | VODzilla.co | Where to watch online in UK

Sky Atlantic will be voting in The New Pope in January, and a new trailer gives us our first proper look at the show’s return.

Created and directed by Paolo Sorrentino and starring Jude Law and John Malkovich, The New Pope continues the story of The Young Pope.

We pick things up as Pius XIII is in a coma. And after an unpredictable and mysterious turn of events, the Secretary of State Voiello succeeds in the enterprise of having Sir John Brannox, a moderate English aristocrat, charming and sophisticated, placed on the papal throne adopting the name John Paul III.

The new pope seems perfect, but he conceals secrets and a certain fragility. And he immediately understands that it will not be easy to replace the charismatic Pius XIII: hanging between life and death, Lenny Belardo has become a Saint and thousands of faithful are now idolizing him, fueling the contrast between fundamentalisms.

Meanwhile, the Church is under attack from several scandals that risk devastating the hierarchies irreversibly and from external threats striking the symbols of Christianity. As always, however, in the Vatican nothing is what it seems. Good and evil proceed arm in arm towards history. And to reach the showdown we must wait for the events to take their course…

Trailer: Sky’s The New Pope to air in January 2020

The New Pope will be back on our screens in 2020, Sky has confirmed, and a new trailer gives us a fresh glimpse of Jude Law’s return.

The HBO-Canal+-Sky production, a follow-up to The Young Pope, promises a “religious experience of a different kind”, and that’s exactly what we get, as we see both Law’s Lenny back in action as the first American Pope, joined by John Malkovich as the new Pope appointed to succeed him. What ensues is a gently probing study of faith, identity and duty.

Sky Atlantic has unveiled the first trailer for The New Pope ahead of its premiere at the Venice Film Festival this weekend.

Written by Paolo Sorrentino with Umberto Contarello and Stefano Bises, it marks Sorrentino’s second limited series set in the world of the modern papacy.

The trailer sees Law on head-turning form – literally – as we the New Pope looking more like Daniel Craig in Casino Royale than the leader of the Catholic Church.

Jude Law and Paolo Sorrentino are teaming up once again to explore the modern Catholic Church with The New Pope.

The Sky, HBO and CANAL+ original co-production, created and directed by the Academy Award winning director, is Sorrentino’s second limited series set in the world of the modern papacy, following The Young Pope. The cast features Jude Law and other returning cast from The Young Pope, including Silvio Orlando, Javier Cámara, Cécile de France, Ludivine Sagnier, Maurizio Lombardi. New cast joining the limited series are Henry Goodman, Ulrich Thomsen, Mark Ivanir and Massimo Ghini – and, at the head of them, John Malkovich.

Now, the first image from the series has been revealed, giving us an official look at Law and Malkovich.

The New Pope is written by Paolo Sorrentino with Umberto Contarello and Stefano Bises and is produced by Lorenzo Mieli and Mario Gianani for Wildside and co-produced by Haut et Court TV and Mediapro. All eight episodes are directed by Sorrentino. No release date has yet been confirmed, but it will premiere on Sky Atlantic in the UK. In the meantime, you can catch up with The Young Pope on Sky Box Sets and NOW TV.

“A highly nuanced and elegantly mounted piece of televisual spectacle,” we wrote in our review.

Netflix to tell story of Spotify in new drama 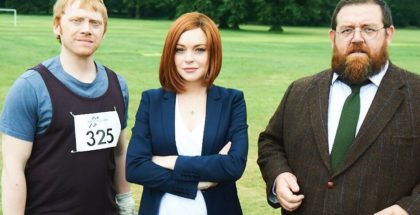