In pursuit of self-determination, a young woman leaves her ultra orthodox Jewish community in New York City to start a new life in Berlin. But just as she starts to find her own way, the past begins to catch up with her.

Unorthodox: Season 1 is available on Netflix UK, as part of an £8.99 monthly subscription.

The creator of hit German series Deutschland 83 (pictured above) is heading to Netflix for new drama Unorthodox.

The streaming giant has been stepping up its investment in European shows significantly in recent years, and at a roundtable discussion at the Berlinale Drama Series Days this week, announced two more fresh from Germany.

With Unorthodox, showrunner Anna Winger (Deutschland 83, Deutschland 86) tells the story of a young woman who escapes an arranged marriage in New York and embarks on an urgent journey of self-discovery. But just as she finds her freedom in Berlin, the past catches up to her. Inspired by Deborah Feldman’s New York Times bestselling book, the series is produced by Winger at Studio Airlift and Henning Kamm of REAL FILM Berlin.

“I am thrilled to be working with Netflix on Unorthodox, inspired by Deborah Feldman’s journey of self-discovery,” says Winger. “At a time when women’s rights are being challenged the world over, Feldman’s story resonates far and wide. It is a privilege for us, at Studio Airlift, to collaborate with an incredible team of Berlin-based artists and bring this story to screens everywhere.”

It will be joined by Biohackers, written and directed by Christian Ditter (How to be single, Turkish for Beginners), which sees a medical student discovers the use of highly advanced biohacking technology in her university town. When a groundbreaking discovery falls into the hands of the wrong people, Mia has to decide which side she is on and how far she is willing to go to find out the truth. It’s produced by Uli Putz and Jakob Claussen of Claussen+Putz Filmproduktion.

“I’ve always loved the magic of stories that pit ordinary people against truly extraordinary circumstance,” says Ditter. “I’m excited to partner with Netflix to combine exciting visual storytelling with truthful, multi-layered characters rising to the challenges of the spectacle unfolding around them.”

“These exciting projects all stand for Netflix’ commitment to the European market and deliver original and locally grounded stories that can touch audiences worldwide. We are proud to bring the bold visions of these amazing storytellers to both local and global audiences,” says Kelly Luegenbiehl, Vice President International Originals Europe, Turkey and Africa at Netflix.

Trailer: Sky’s The Third Day to premiere this May 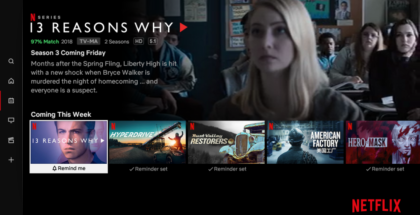