Watch: Full trailer for Chilling Adventures of Sabrina Part 2 | VODzilla.co | Where to watch online in UK 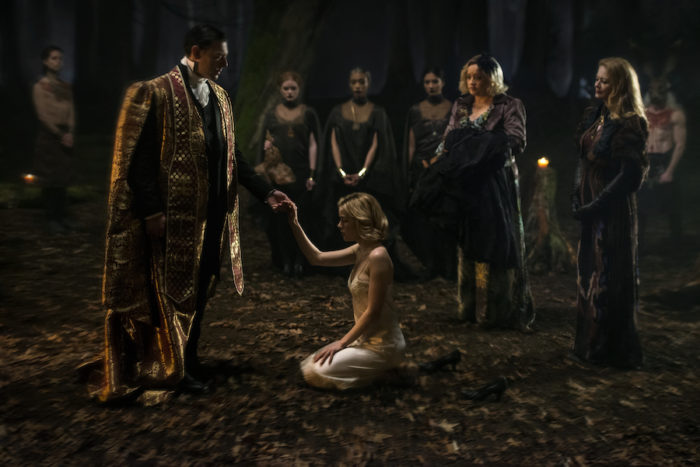 “Something is different about Sabrina…” It’s a wicked world out there, and your favourite teenage witch is brewing up trouble in the new trailer for Chilling Adventures of Sabrina: Part 2.

After signing her name in the Book of the Beast, Sabrina struggles to find the balance between her place in the mortal world and her new darker side – but surely, her dark side can’t be that bad… can it? New challenges await to test her, including having to choose between the familiar mortal Harvey Kinkle, and the sexy warlock Nicholas Scratch. She may have signed her name to the Dark Lord, but that doesn’t mean she isn’t willing to raise a little hell.

The Chilling Adventures of Sabrina continue on Netflix on Friday 5th April. Here’s the new trailer:

In case you weren’t already excited for the return of Sabrina the teenage witch to Netflix, a new poster has landed to give us a further taste of the show’s new direction.

“Sabrina Spellman is all set to take up Buffy’s mantle as TV’s new kick-ass, pop-feminist horror icon,” we wrote in our rave review of Season 1. “Chilling Adventures of Sabrina – like Buffy the Vampire Slayer, like Harry Potter – is a coming-of-age saga with a rich and well-written mythology. Like those titles, too, Aguirre-Sacasa’s latest show values friendship as the lynchpin of survival in a hostile and constantly threatening world. Funny, dark, politically-charged, weird, subversive, spooky, occasionally violent and always compelling, this reboot is another big winner for Netflix.”

Part 2 finds Sabrina (Kiernan Shipka) exploring her darker side, curious to learn more about her heritage, while struggling to maintain her friendships in the mortal world. But most of all, it sees her torn between two love interests: salt-of-the-Earth mortal Harvey Kinkle, or sexy warlock Nicholas Scratch. They’re front and centre with Shipka’s Sabrina on the new artwork, setting the playful, dark, swooning tone for the show’s sophomore run. 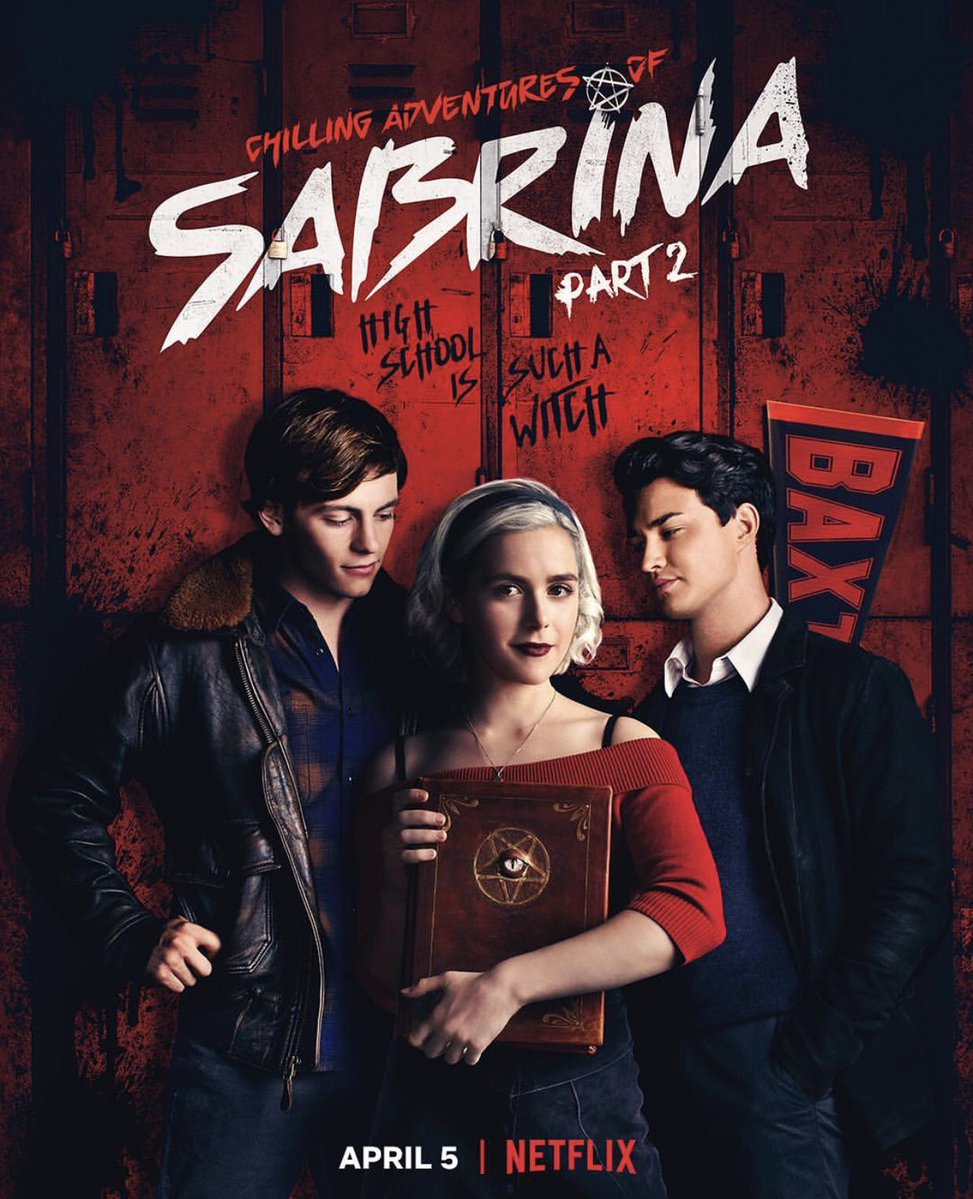 Sabrina returns to Netflix this Easter, with Part 2 of the teenage witch’s coming-of-age drama bringing us more horror-tinged comedy and teenaged romance.

Part 2 finds Sabrina (Kiernan Shipka) exploring her darker side, curious to learn more about her heritage, while struggling to maintain her friendships in the mortal world. Romantically, Sabrina is caught in an unholy love triangle with between sexy warlock Nicholas Scratch and salt-of-the-Earth mortal Harvey Kinkle. Meanwhile, The Dark Lord, Madame Satan, and Father Blackwood continue to conjure chaos in the Spellman household and the town of Greendale. And they aren’t the only ones trying to raise hell. Everything is in question…relationships, identity, true intentions…when the devil’s work is at hand. 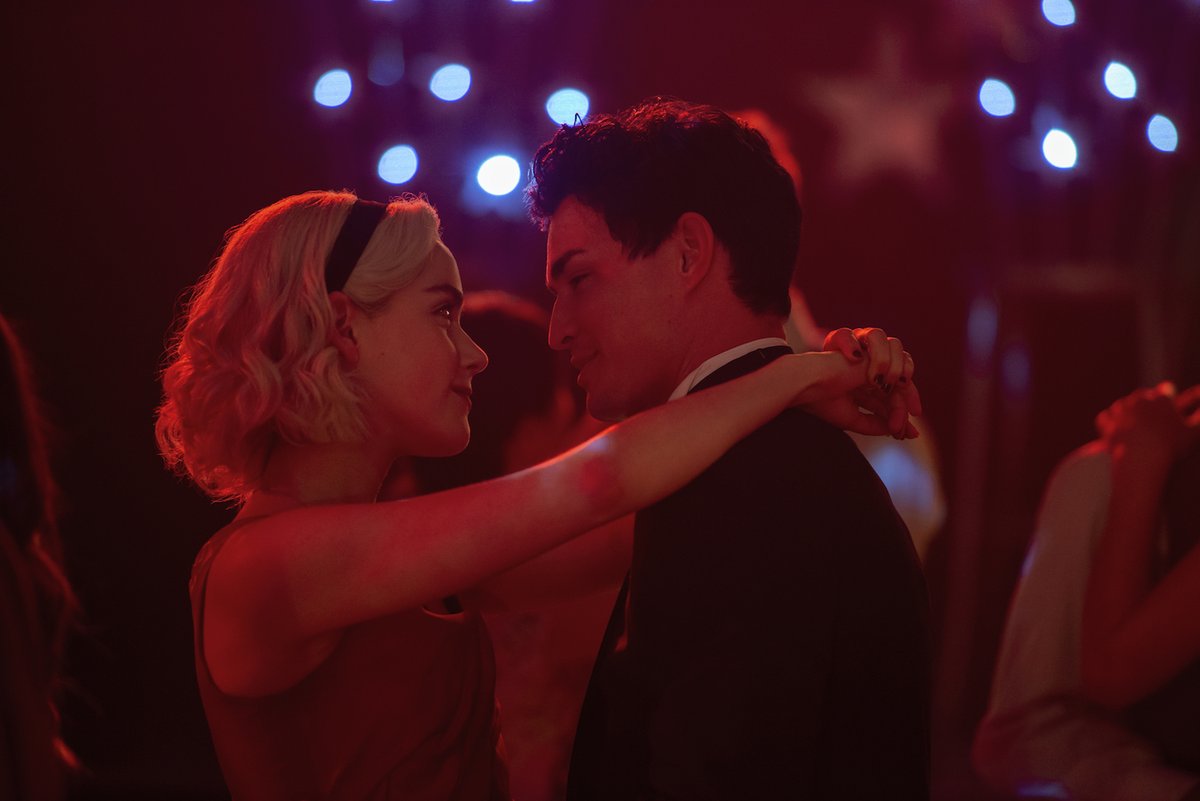 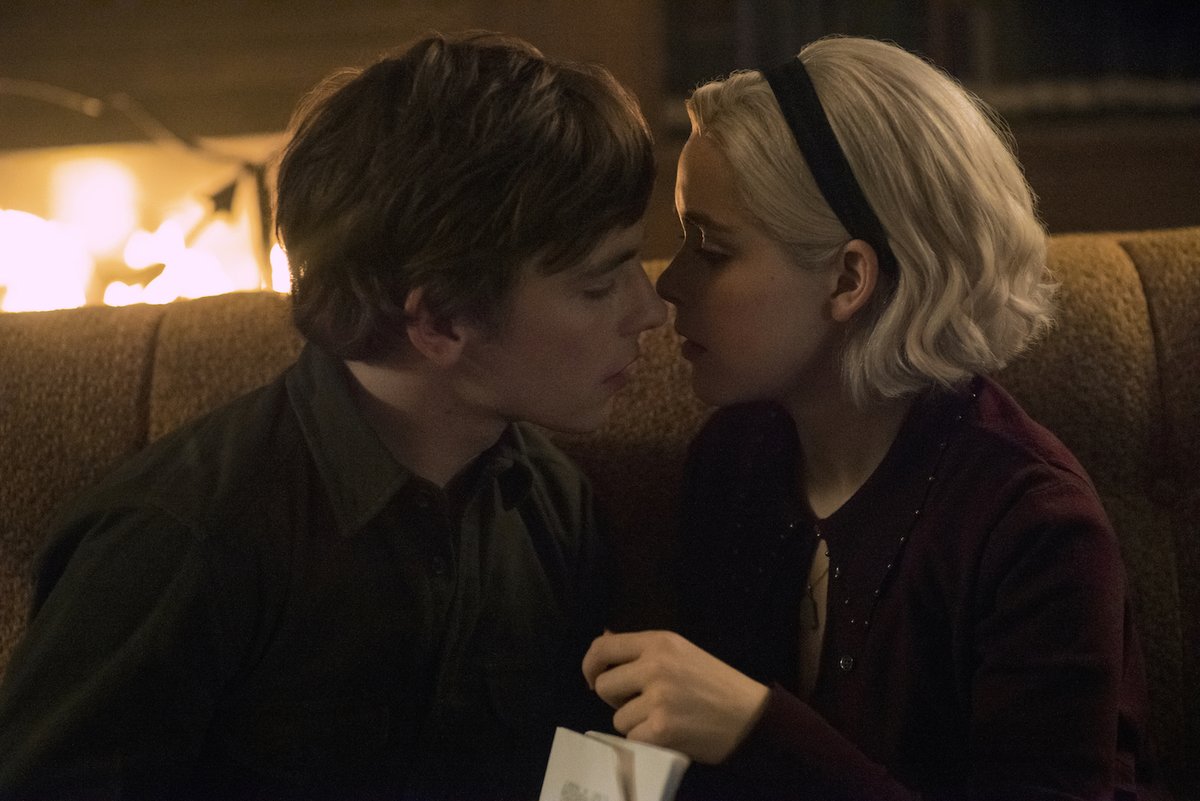 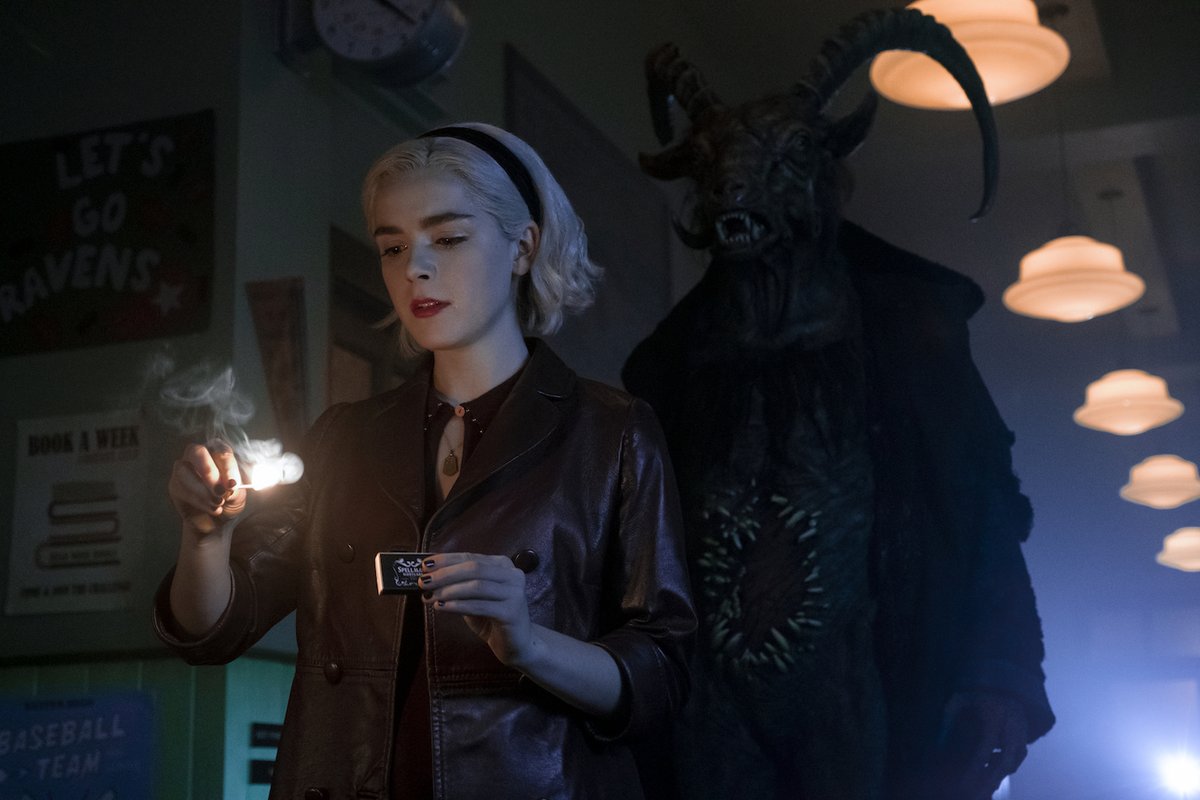 Chilling Adventures of Sabrina returns for Part 2 in April 2019

Chilling Adventures of Sabrina is returning for more episodes – and sooner than you might expect. Yes, before Netflix’s reimagining of everyone’s favourite teenage witch can debut its Christmas special, the streaming giant has already revealed that its horror-tinged coming-of-age teen comedy-drama will be back on our screens in April.

The show will return this December for Chilling Adventures of Sabrina: A Midwinter’s Tale, which will follow the Church of Night’s annual celebration of the Winter Soltice, as Aunt Hilda (Lucy Davis), Aunt Zelda (Miranda Otto) and Sabrina (Kiernan Shipka) hunker down and watch Christmas movies. They’ll be joined by guest star Alexis Denisof as Mary Wardwell’s boyfriend, Adam Masters, who returns to Greendale after a stint overseas, unaware that Mary has been taken over by the demoness Madam Satan.

Jedidiah Goodacre as warlock Dorian Gray and Mckenna Grace (Captain Marvel, Annabelle 3) as Li’l Sabrina have also been cast in the series’ Christmas special, with all three recurring guest stars, which means we may well see them in again in Part 2.

That, meanwhile, is only a few months away, with all new episodes dropping on Netflix on Friday 5th April. It picks events up after Part 1, as Sabrina goes full witch, navigating the Path of Night while holding on tight to her friends who walk the Path of Light.

“We definitely… Sabrina definitely changes and shifts a lot. Her growth is very evident and the second season definitely has a different spin on it than the first season. They’re very different from each other,” teased Shipka in an interview earlier this year.

Chilling Adventures of Sabrina: Season 1 is available on Netflix UK, as part of an £8.99 monthly subscription.

This weekend saw the release of Chilling Adventures of Sabrina on Netflix and, if you’re anything like us, you’ve already binged the whole lot. The good news? Season 2 is already filming – and Kiernan Shipka has been dropping details of what we can expect from the teenage witch’s sophomore outing.

Pitched somewhere between Rosemary’s Baby and The Exorcist, with a hint of Buffy the Vampire Slayer, Netflix’s companion show to Riverdale reimagines her origin and adventures as a dark coming-of-age story, as the 16-year-old wrestles to reconcile her dual nature — half-witch, half-mortal — while standing against the evil forces that threaten her, her family and the daylight world humans inhabit.

“With a determined spirit and boldness, Sabrina Spellman v.2018 represents a smart 21st century updating, and a decidedly feminist one,” we wrote in our spoiler-free review of Season 1. “Funny, dark, politically-charged, weird, subversive, spooky, occasionally violent and always compelling, this reboot is another big winner for Netflix.”

The streaming giant evidently had enough confidence that it had a hit on its hands, giving a full 20-episode order that prompted the project to jump ship from The CW to Netflix. But how do you build upon such a promising, surprising and sinister start? The primary answer is not to slow down.

“We went straight into the second season from the first and it’s been really so exceptionally fun to film, especially given the fact that I feel like we’re already in such a rhythm from coming out of the first season that to jump right into the second one was really, really fun and just a great opportunity to keep the momentum going,” Shipka told Bloody Disgusting in an interview. “We definitely… Sabrina definitely changes and shifts a lot. Her growth is very evident and the second season definitely has a different spin on it than the first season. They’re very different from each other.”

“I would just say that, without giving too much away, because it would be a bit of a spoiler, the way that Sabrina’s life takes certain turns and certain decisions she makes inform the second season,” Shipka added. “The finale of the first season sets up a lot. It goes in a different direction. We see more different characters. It deals with a different side of things.”

We won’t spoil the end of Part 1 here, but to get an idea of what she’s talking about, you can binge the whole box set on Netflix now. Still need convincing? Read our review here. 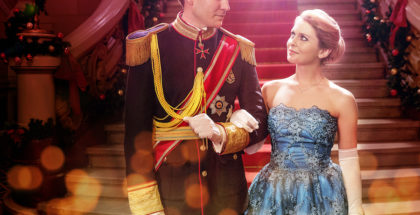 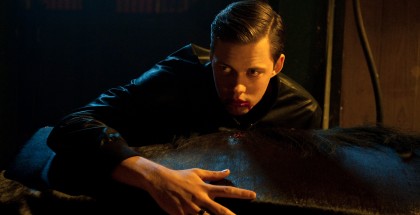 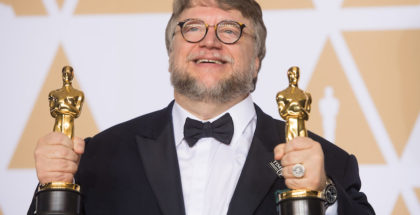 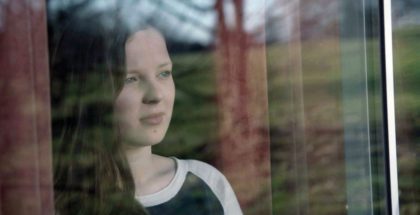