Batman v Superman v Daredevil? Netflix's Season 2 reportedly set for March release date | Where to watch online in UK | How to stream legally | When it is available on digital | VODzilla.co 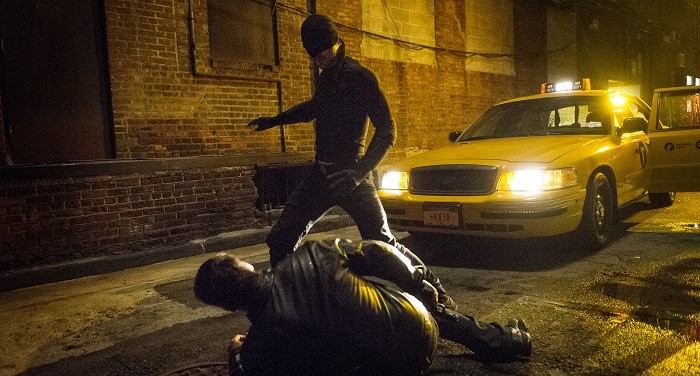 Daredevil Season 2 may be going head to head with Batman and Superman this year – not literally, of course, but their release dates could well collide, according to new reports.

Comicbook.com claims that the show will be released on Netflix on Friday 25th March, earlier than the April release date given to Season 1 in 2015. That would place it in direct competition with Batman v Superman: Dawn of Justice. Marvel and DC Comics fighting for viewers’ screens? It wouldn’t be a complete surprise: Captain America: Civil War was originally set for a similar cinema date clash this May, until Warner Bros. brought forward their Justice League title forward to March. Now, Marvel’s TV division seem to be picking a showdown once again, with their own universe-building additions of The Punisher and Elektra.

The report is still unconfirmed at this stage and we’re not one for rumours at VODzilla.co – who has the time to bother with possible castings or hype-driven conjecture when there’s so much TV to watch? – but the suggested Daredevil date comes with some weight. ComicBook.com attributes their news to “independent sources”, while Entertainment Weekly, which recently previewed the new season of Daredevil (including a new image), also billed the show as coming in March.

Would comic book fabs really be divided as to what to watch that weekend? Of course not: there is loads of time to fit in a cinema trip and several hours of binge-watching, but casual Netflix subscribers might well find their attentions swallowed by what is likely to be another excellent run of episodes – you can catch up with our reviews of Daredevil Season 1 here, or read our interview with the people who designed its opening titles.

Either way, the good news is that you probably won’t have to wait as long for your next Marvel/Netflix fix.

In the meantime, here’s that picture of Jon Bernthal’s Punisher in Daredevil Season 2:

EW reports that Daredevil’s second run will “[shake] things up with a faster pace, more romance, and some morally complex storytelling”.

“Season 2 opens with an action scene and very quickly introduces Frank Castle a.k.a. the controversial gun-toting super-antihero The Punisher (The Walking Dead’s Jon Bernthal)… He has the same clean-up-the-streets mission as Matt Murdock (Charlie Cox), except he uses guns instead of beatdowns and quite simply murders every criminal he can find. Whether he’s a hero or a villain is left open to interpretation, but the first couple episodes will have many viewers supporting his techniques.”