The Tick fails to find new TV home | Where to watch online in UK | How to stream legally | When it is available on digital | VODzilla.co 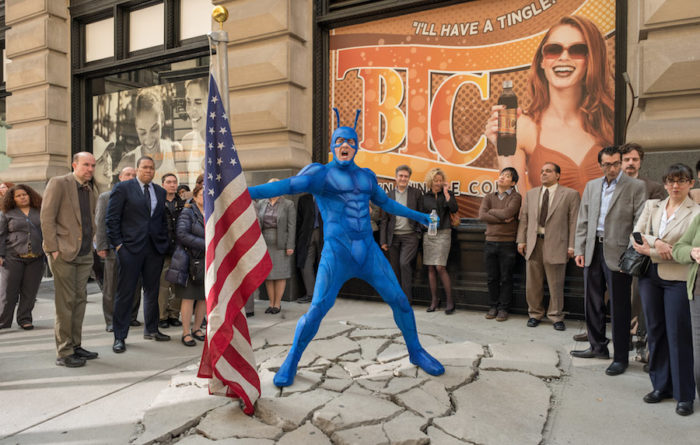 The Tick has failed to find a new TV home, following its cancellation by Amazon.

The show followed Arthur (Griffin Newman), an unassuming accountant with no superpowers, who became embroiled in the middle of the battle between good and evil. When he realised that his city is owned by a global supervillain who was long thought to be dead, he struggled to uncover the conspiracy. One person who believed him was a mysterious new ally, The Tick (Peter Serafinowicz), a bizarre blue superhero – who may have been a figment of Arthur’s imagination all along.

Creator Ben Edlund has since shipped the programme around but has now confirmed to fans that the series has not been picked up anywhere else.

“After much door-knocking we have found no new home for the Tick series in this current market. #SaveTheTick & #LunaTickArmy I’m sorry we could not reward your glorious support with better news,” he tweeted. “I am so proud of the show, of the cast and crew and writers, and so warmed by the fans.”

“We will look for other opportunities to continue this story with this cast, but the current series must I’m afraid come to its end,” he added. “Please continue to choose love and hope for good things. And I think we might as well accept it as a law of the universe: when the time is right #TheTick always comes back…”

The Tick will not return to Amazon Prime Video for a third season, its creator has confirmed.

The show follows Arthur (Griffin Newman), an unassuming accountant with no superpowers, who becomes embroiled in the middle of the battle between good and evil. When he realises that his city is owned by a global supervillain who was long thought to be dead, he struggles to uncover the conspiracy. As he becomes obsessed with the conspiracy, most people think he’s crazy. One person who believes Arthur is a mysterious new ally, The Tick (Peter Serafinowicz), who is a bizarre blue superhero – and may just be a figment of Arthur’s imagination.

“I’m sorry to say Amazon has chosen not to proceed with [‘The Tick’],” he said. “I’m not sorry to say I love this show, its cast, its story, and its message. Destiny demands that my compatriots and I now seek a new home for this series.”

“Meanwhile thank u from my heart’s bottom to all the fans who’ve shared their love with us and the show. Thank you sweet #LunaTicks and #LunaTickArmy for your militant affection :) We want to find a place to make more. That is the mission now and we are on it.”

“Our show is very much still alive at this moment! We’re all still under contract, and actively trying to find a new place to keep the show going! Fan demand is really what has the power to push us over the edge right now, so please be loud! It’s time to #SaveTheTick!” added star Griffin Newman.

Glenda Jackson to star in BBC One’s Elizabeth Is Missing