What's coming soon to Shudder UK in November 2021? | Where to watch online in UK | How to stream legally | When it is available on digital | VODzilla.co

Who says horror is just for Halloween? What’s coming to Shudder UK in November 2021:

Five rich spoiled Asian twenty-somethings (Gijs Blom, Aviis Zhong, Yen Tsao, Philip Juan, Anechka Marchenko) are suffering from upper class ennui, unsure how to spend their days when so little is expected from them. In search of excitement, the five friends form the “Circle,” a group where they take turns designing a unique, extravagant experience for the others. But things go wrong when the privileged urbanites awaken after a night out, to find they have developed vampire fangs and an unquenchable thirst for flesh, blood, and adventure at any price.
Written & directed by David Verbeek

An exhausted married couple, Babak (Shahab Hosseini), Neda (Niousha Noor) and their toddler decide to stay in a hotel overnight when their journey home from a party becomes treacherous. They soon realise they have been trapped by an insidious presence and are forced to confront each other and the secrets that lie between them.

Prisoners of the Ghostland – 19th November

In the treacherous frontier city of Samurai Town, a ruthless bank robber (Nicolas Cage) is sprung from jail by a wealthy warlord, The Governor (Bill Moseley), whose adopted granddaughter Bernice (Sofia Boutella) has run away. Strapped into a leather suit that will self-destruct within five days if he doesn’t find the missing girl, the bandit sets off on a journey to find the young woman — and his own path to redemption.

In the dead of winter, Catherine (Teagan Johnston), a talented musician who, having recently broken up her successful band, travels to her aunt’s remote coastal cottage to work on new material in solitude. Once there, she and local photographer Grace (Jenna Schaefer) spark up a budding romance while visiting an abandoned farmhouse with a disturbing past. Soon after, strange and seemingly supernatural occurrences begin to manifest at the cottage, escalating each night and dangerously eroding Catherine’s sense of reality.
Directed by Ryan Glover; written by Ryan Glover & Krista Dzialoszynski

Five fans of THE SHINING explain their bizarre theories about the film’s true meaning in this must-see doc about the passion Stanley Kubrick’s classic horror film inspires in viewers. One fan thinks the film is about the slaughter of Native Americans, while another thinks it’s about the supposedly faked Apollo 11 moon landing. But whether you agree with their outlandish conjectures (and no contradictory historical evidence is included) or not is less the point than the power cinematic creations have to lodge themselves in our brain and never let go.

A remote island is inhabited by young boys who are subjected to strange medical treatments. Soon one boy makes a disturbing discovery beneath the waves.

In less than 24 hours, the city of Pico Mundo will awaken to a day of catastrophe. When Odd, a fast-food chef with the ability to see the dead and sense impending danger, discovers a dark secret about a stranger in his town, he is compelled to unravel the truth.

What We Do in the Shadows – 8th November

Follow the lives of Viago, Deacon, and Vladislav, three flatmates who are just trying to get by in modern society; from paying rent and doing housework to trying to get invited into nightclubs, they’re just like anyone else – except they’re immortal and feast on human blood. When their 8000-year-old roommate Petyr turns twentysomething human hipster Nick into a vampire, the guys must show him the ropes and guide him through his newfound eternal life. And in return they are forced to learn about modern society, fashions, and the internet. From Taika Waititi and Jemaine Clement.

When three shipwrecked sailors land on an island abandoned except for four sole residents, one sailor starts to question what happened on the island. He must uncover the truth while he battles to save his own life and escape the isle.

The Strange Color of Your Body’s Tears – 15th November

This visually stunning Belgian giallo homage follows a man who returns home from a trip, only to find his wife missing. Seeking answers, Dan visits his nasty neighbors, who draw him into a surreal mystery that keeps getting stranger and stranger. Is there a conspiracy at work? How many secret passages does the building have? And where is Dan’s wife? Hélène Cattet and Bruno Forzani’s second film is, like 2009’s AMER, a trippy fantasia on the stylish and scary imagery found in the films of Dario Argento and other giallo greats, and a must watch for fans of the subgenre.

Through a failed medical experiment, a priest is stricken with vampirism and is forced to abandon his ascetic ways. From Park Chan-wook (Oldboy, The Handmaiden).

On the night of an astronomical anomaly, eight friends at a dinner party experience a troubling chain of reality bending events. Part cerebral sci-fi and part relationship drama, Coherence is a tightly focused, intimately shot film that quickly ratchets up with tension and mystery.

Twins Todd and Terry seem like sweet boys that is, until one of them takes an axe to face of a fellow patron at the local drive-in. Todd is blamed for the bloody crime and institutionalized, whilst twin brother Terry goes free. Ten years later and, as the family gathers around the table for a Thanksgiving meal, the news comes in that Todd has escaped. But has the real killer in fact been in their midst all along?

From post-apocalyptic westerns to demented comedies to terrifying horror and gore, Etheria serves up the perfect blend of mind-bending and panic-inducing excitement from the best emerging women genre directors in the world. Each episode showcases a vision of the fantastic in this anthology series created to introduce amazing directors to devoted genre fans.

Rural police officer Cruz investigates the bizarre case of a headless woman’s body found in a remote region by the Andes Mountains and the husband of Cruz’s lover becomes the prime suspect. The husband blames the crime to the appearance of the “Monster” and as more deaths happen – Cruz must determine who is the real monster.

A psychological thriller that tells the story of Maria, an alienated high-school student whose life is turned upside down when she switches places with her sinister mirror image.

All the Creatures Were Stirring – 29th November

Ho, ho, no! The joyful spirit of the holidays is about to take one dark turn after another. From sadistic office parties and last-minute shopping nightmares to vengeful stalkers and immortal demons, there’s plenty out there to keep you from getting out of bed to see what’s under the tree this holiday season. Constance Wu and Jonathan Kite headline a sensational ensemble cast in this devilish stocking stuffer of a movie.

A birthday party quickly devolves into chaos when a mysterious natural disaster traps eight teenage girls along in a house, where paranoia and group manipulation test their friendships, identities and eventually their grip on reality.

Other titles coming soon to Shudder UK in November 2021 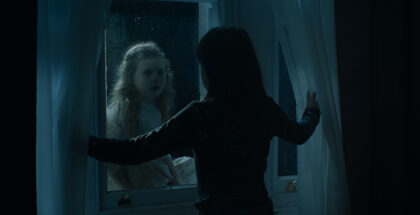