Top 14 TV shows and films coming soon to NOW TV in March 2015 | Where to watch online in UK | How to stream legally | When it is available on digital | VODzilla.co

Game of Thrones is here – well, almost all of it, as the first four seasons return to NOW ahead of Season 5’s premiere in April. But if it’s strange beasts, bloody violence and action, you’re after, March has both TV and movie subscribers covered, with the arrival of Guardians of the Galaxy, Edge of Tomorrow and How to Train Your Dragon 2 – not to mention the exceptionally silly game show Wild Things on Sky 1.

NOW is Sky’s subscription VOD service for the cord-cutting age: for £9.99 (NOW Cinema Membership) a month, you get on-demand access to the Sky Movies catalogue, and for £6.99 (Entertainment Membership) a month, you get live streaming of Sky TV channels (including Sky Atlantic, Sky Arts, FOX UK and Sky 1) and the option to catch up with programmes on-demand. Both have no minimum contract.

Here are the top new releases coming coming soon to NOW in March 2015.

Sky’s biggest show returns in April, which makes March the unofficial Games of Thrones catch-up month. With Season 1 of the series already available on demand, Seasons 2 and 4 hit NOW on Sunday 1st, giving you another chance to relive the trauma of *that* wedding. And the other one too.

After a dramatic season two finale, Kevin Williamson’s serial killer thriller returns with a double-bill. Season 3 sees Ryan Hardy (Kevin Bacon) moving on from the dark events of his past, until he and his team realise that James Purefoy’s cult leader Joe Carroll is only the beginning: his ex-follower Mark (Sam Underwood) is out there too. Season 2 is available to catch up on demand. (Season 1 leaves NOW at the end of February 2015, but is available on Amazon Prime.)

Wild Things is a new family entertainment show, which features teams (pairs of relations or couples) undertake a range of challenges on a gigantic woodland obstacle course in order to get the chance to walk away with a fortune in gold coins buried deep within the Wild Wood. The catch? One member of each team has dress as a woodland animal – which means they can’t see a thing. Worryingly funny.

Sometimes, all you need in life is Tom Cruise and an F-14 Tomcat fighter jet.

Tom Cruise season continues with this modern classic comedy, which sees agent Jerry Maguire experience a crisis of conscience and leaves his high-powered job behind – with only one client and a co-worker in tow.

Francis Ford Coppola’s gangster trilogy needs no introduction. (Unless you count that sentence.)

Gareth Edwards goes from tiny Monsters to the biggest one of all in this remake of Godzilla, which updates the original’s horrifying context to a less traumatic modern day – but still retains the awe and terror of a gargantuan beast laying waste to a city.

Tom Cruise and Emily Brunt are superb in this hugely underrated sci-fi thriller, which sees a US military PR officer trapped in a never-ending loop of combat against an alien foe. Skilfully edited and charismatically performed, the title may not be very clear – is it called “Live Die Repeat” or not? – but the film knows exactly what it’s doing: having lots and lots of fun.

Director Erik Poppe gives his film about a war photographer the kind of emotional authenticity that comes from personal experience. Juliette Binoche plays snap-happy Rebecca, who finds her family unravelling when she returns from a dangerous assignment abroad, while Game of Thrones’ Nikolaj Coster-Waldau provides emotional support as her husband.

“I can’t stop this feeling…” Chris Pratt jumps from Andy Dwyer to bonafide action hero with this Marvel outing. The bits that seem familiar from other superhero movies are swiftly eclipsed by the infectious humour of the cast, from Bradley Cooper’s violent raccoon to Vin Diesel’s talking tree. Director James Gunn’s soundtrack is the highlight, though, writing unwitting human Peter Quill’s (a.k.a. StarLord) 1970s mixture into the action. The result is a smart, silly, subversive treat.

How to Train Your Dragon 2 – Friday 27th March

Hiccup and Toothless return for another animated adventure, which sees the young Viking face the prospect of one day taking over from his dad as chief of the tribe, as well as the threat of an alpha dragon master with his own flame-breathing army. Loyalty, parenthood and kick-ass flying sequences combine to make a mature and moving family story. Who said sequels had to be rubbish?

Grace of Monaco follows Grace Kelly as she moves from her glittering Hollywood fairytale life to another, equally glittering, fairytale: the life of Her Serene Highness the Princess of Monaco. From the over-acting to the dreadful script, this oddity is entertaining to witness, but for all the wrong reasons. 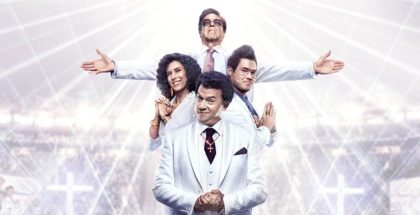