For a full list of what’s coming out on VOD in the UK in December, including pay-per-view and other subscription services, click here.

December is upon us, which means it’s time for our monthly round-up the best of what’s coming soon to Netflix UK.

The streaming service may not have much going on when it comes to festive films – see our list of Christmas films on Netflix UK – but Santa’s got a great haul in store, with what just might be Netflix’s strongest month of 2014. From Oscar-winning drama to Adventure Time, cross-dressing A-listers to Ron Swanson, Stephen Fry to James Franco, not to mention Netflix’s epic new original series, winter has never been more welcome.

Here are the top 28 new releases coming soon to Netflix UK in December.

Note: Some release dates are subject to change, with many Netflix titles often appearing online up to 24 hours early.

Amy Berg’s documentary follows the events of the West Memphis Three case, in which three teenagers were convicted of murdering three children. Were they wrongfully convicted? Years of investigation reveals both shocking practices in the US justice system and devoted passion from civil rights campaigners.

The Case Against 8 – 1st December

In 2008, California banned same-sex marriage. The response? A carefully planned and lovingly dedicated legal case to overturn the ruling, which unfolds with humour, heart – and, like all weddings, more than a few tears.

Dustin Hoffman stars in this winning comedy drama about an actor who finds himself out of work thanks to his reputation for being difficult. His solution? Dress up as “Dorothy” and audition for parts that way. The idea of a man learning about sexism in the entertainment industry and himself may sound dated or cliched, but this story is as relevant now as it ever was. It’s also, crucially, very funny.

In the spring of 1942, German troops advance deep into the Soviet Union, en route to Stalingrad. Hitler, seriously misjudging the tenacity of the Red Army, is convinced that the city can be conquered before winter. Inadequately clothed and without sufficient food, the Nazi troops literally freeze and starve to death, largely abandoned by their leaders. For the soldiers Fritz, Hans, Rollo and GeGe the struggle for life has just begun.

Mary Elizabeth Winstead and Aaron Paul are astonishing in this moving drama about a couple struggling with addiction. After lying to her class about why she threw up in the middle of a lesson, alcoholic Kate finds her life slowly falling to pieces. Brutal. Brilliant.

One man has unsettling visions during a family day out at Disney World. Shot entirely guerilla-style on location, without the park’s knowledge or permission, it’s an ambitious slice of horror fantasy where happy ever after has never seemed so surreal.

Felicity Jones steals the show from Charles Dickens in Ralph Fiennes’ biopic, which shines a light on his secret affair with young mistress Nelly and confirms the actress as one of the best British talents around.

After adding the charming Winnie the Pooh earlier this year, everyone’s favourite honey eater is joined by his equally cute friend.

When was the last time someone made lunch for you? A wife does it every day for Saajan (Irrfan Khan) in Ritesh Batra’s romantic dainty – a film that will leave your tummy rumbling, if not your heart racing. The only problem for the insurance worker? It’s not his wife.

One of the most unappreciated cartoon series of the last 20 years. Tiny kids will recognise the childhood inventor’s petty bickering with his meddling sister, Dee-Dee, while adults will be charmed by the knowing wit and Genndy Tartakovsky’s stunning animation.

The world’s most likeable womaniser returns.

There’s a lot to be said for any educational kids’ TV programme designed to encourage exercise – especially when it’s as colourful and musical as this. Part CGI and part live action, the character’s giant chins and pun-filled names (hello, Sportacus) will intrigue adults but if you’ve ever had a child or relative under the age of 7 in the last 5 years, they’ll already know Lazy Town – testament to how well it achieves its aims.

Why should kids have all the animated fun? Cartoon Network’s surreal Regular Show first arrived on Netflix one year ago, joining Archer and (now) BoJack Horseman in the streaming service’s mature cartoon line-up. The show follows Mordecai (a blue jay) and Rigby (a raccoon), who spend their days trying to avoid doing work as groundskeepers in a park.

When Hannah Montana’s musical stardom starts to take over Miley Stewart’s life, she takes a road trip back to her home town in Tennessee to work out what she wants.

There’s something about American’s manliest male man Nick Offerman (Parks and Rec’s Ron Swanson) that makes it almost impossible not to find him hilarious. Is it his face? His moustache? His musk? Either way, he promises his stand-up show (tapted in New York last year) will be a master class in life, love, woodworking, meat eating and being a man.

Mickey’s Magical Christmas: Snowed in at the House of Mickey Mouse – 15th December

Netflix’s Christmas selection is more naughty than nice, but of the few confirmed festive additions on the way this month, Snowed in at the House of Mickey Mouse is most likely to warm you up by the fire. It follows Mickey’s Twice Upon a Christmas, added last month.

Netflix is fast establishing itself as the VOD platform stand-up comedy. So far, though, the selection has mostly been raucous edgy comedians from the USA. Now, though, Stephen Fry will join the site’s live entertainment acts with the third volume of his autobiography – and they don’t come more British than that. This recording of his solo appearance at London’s Royal Festival Hall was broadcast live to UK cinemas earlier this year, chronicling the heady tale of the late Eighties and early Nineties in which Stephen – driven to create, perform and entertain – burned bright and partied hard – and damn the consequences.

Oh my glob. Put 15th December in your diaries, folks, because exactly 12 months ago is when Finn and his shape-shifting dog, Jake, arrived on Netflix UK. Season 2 arrives on Monday 15th – although Netflix likes to chop up its Adventure Time into two halves, so the site will claim they have four seasons…

Beyond the Edge – 17th December

We’ve never climbed Mt. Everest, but this documentary is about as close as it gets. Retelling Sir Edmund Hillary’s quest to reach the peak, the part-reconstruction/part vox pop presentation makes for a thrilling celebration of a towering achievement.

Kids may be flocking to cinemas to see killer penguins this Christmas, but when they get back home, Madagascar’s other spin-off series is waiting for them…

Andy Samberg stars in this US action comedy series about a childish cop. If you missed it on Channel 4, here’s your chance to catch it.

Russell Tovey and Sarah Solemani reprise their roles as television’s most believable flatmate couple in this BBC 3 sitcom. They don’t do much each episode, but their chemistry is a hilarious, adorable Joe to watch. If you plan to spend Christmas crashing on the sofa, Him and Her is the perfect present – and it arrives just in time for the holidays.

As I lay Dying – 23rd December

What will be the big Christmas release on Netflix? Flight, in which Denzel Washington plays an alcoholic pilot struggling to deal with the aftermath of a plane crash. Let it never be said Netflix doesn’t know how to celebrate Christmas.

Want more Matt Smith after Capaldi’s Christmas escapades? You got him.

For a full list of what’s coming out on VOD in the UK in December, including pay-per-view and other subscription services, click here. 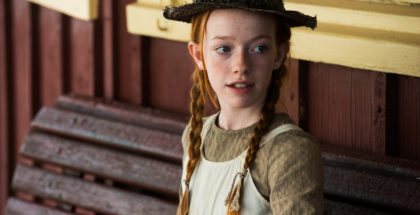