VOD film review: Wrong Turn (2021) | Where to watch online in UK | How to stream legally | When it is available on digital | VODzilla.co 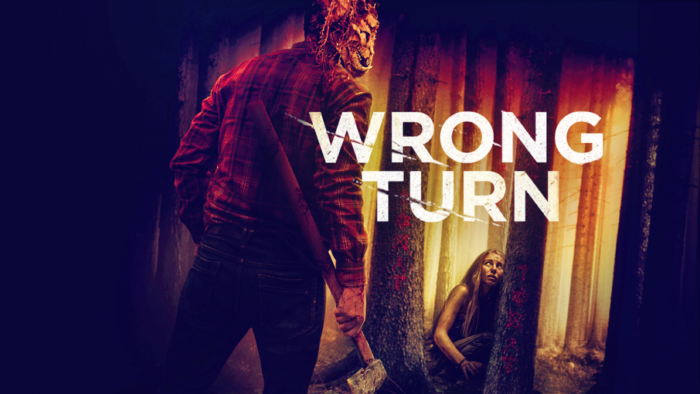 This gory, overtly political horror is a disappointingly familiar sequel.

“Keep to the marked trail. The land can be… unforgiving.” That’s the sound of yet another group of teens getting lost in the proverbial woods as Wrong Turn returns for a seventh entry in the long-running horror franchise. Falling roughly into the same stable as The Texas Chainsaw Massacre and The Hills Have Eyes, the series is rooted in the age-old tradition of backwards communities hunting down people who stray into their remote, rocky territory. The 2021 edition is something of a reboot, bringing in a timely political element to the fray.

Also bringing it up to date is the ragtag clutch of millennials at the centre of the fray: Jen (Charlotte Vega), an arts student (“That means I work in a coffee shop”), her boyfriend, Darius (Adain Bradley), a non-profit worker, Luis (Adrian Favela) and Gary (Vardaan Arora), who own a bistro, Milla (Emma Dumont) an oncologist, and Adam (Dylan McTee), who designs apps. But after running afoul of some rednecks in a middle-America bar, they end up the prey for a huddle of mountain dwellers, wearing skulls and animal fur. With them off the map, Jen’s dad (Matthew Modine) decides to go looking for them.

Despite its attempt to be edgy and modern, Wrong Turn’s mistake is to explicit address the current political climate. Horror movies about withdrawn communities that are hostile to outsiders have always contained a political subtext, and by turning that into surtext, the whole thing becomes distractingly unsubtle and lumbered with predictable, unconvincing dialogue – and things wind down just as they become interesting in an intriguing final act step that gives Bill Sage’s intimidating villain more to do.

One thing that hasn’t changed, though, is the series’ taste for increasingly gory set pieces, and director Mike P Nelson serves up enough messy traps to keep die-hard fans entertained – but after seven instalments, the novelty of watching Home Alone crossed with the Ewoks from Return of the Jedi starts to lose its shine. The result is a journey that, despite trying to take things in a new direction, is disappointingly familiar.