This insight into life under Islamic militant rule is a perturbing, pertinent piece of cinema.

Mauritanian director Abderrahmane Sissako captures life in Mali in 2012, starting with statues being gunned down by the police: a statement that sets the angry tone, and tragedy, of the ensuing 100 minutes.

The puritanical laws make living increasingly impossible for the locals. We see one market worker ordered to wear gloves, which means she can no longer handle fish. We see another sentenced to be punished for simply playing football. It’s no surprise that they stand up to their new rulers. When Satima (Toulou Kiki), a wife and mother, is told to cover her hair after her neighbours have already left, she snaps back: “If you don’t like it, you shouldn’t look at it.”

But Sissako peels back the layers on his lawmakers too. Abel Jafri’s leader Abdelkrim is both forthright and yet not; the epitome of an army that is both sure of its beliefs and unsure of themselves. When recording a video to upload onto the internet, he stops the uncertain presenter. “Your speech… I don’t believe it,” he says, coaching him into sounding more convincing.

There is something of Four Lions in Timbuktu’s ability to humanise everyone on screen. When the militia announce orders in the street in broken Arabic, we are given no subtitles to understand them. “I repeat in French: Adultery is the worst sin,” they continue, text then appearing underneath. Sissako manages to make them both borderline sympathetic and outsiders at the same time; foreigners in their claimed land. But there is subtlety to its shades of grey and a serious message behind them.

His approach produces horrifying moments of personal anguish amid the sea of people. A lake encounter between Satima’s husband, Kidane (Ibrahim Ahmed), and a fisherman whose nets were destroyed by his cattle follows the moral law to a tragically immoral conclusion. Their showdown is shot in a slow, widescreen take that highlights the beauty of the backdrop; a tense yet poetic juxtaposition of these humans and the world that now surrounds them.

Later, a woman is flogged in public for performing music – a beating that is accompanied by wails that transform into singing. In between it all, boys play football with an imaginary ball, an act of defiance and playful humour that feels most human of all. As the portraits pile on top of each other, the result becomes more vivid and startling than the sadly familiar footage that adorns our news. A perturbing, pertinent piece of cinema.

Timbuktu is now available on MUBI UK, as part of a £9.99 monthly subscription.

Where can I buy or rent Timbuktu online in the UK?

Why you should be watching Travelers on Netflix... December 24, 2016 | Ivan Radford 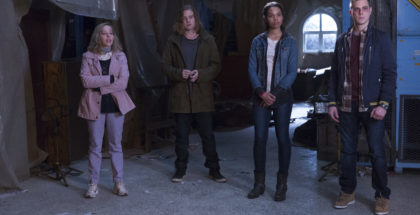