Netflix UK film review: Results | Where to watch online in UK | How to stream legally | VODzilla.co

How do you follow a movie about Computer Chess? With a film about fitness instructors. That’s the decision made by Andrew Bujalski, who couldn’t have picked a more different subject for his new film. But Results is more similar that it might first appear.

Much like the monochrome nerds of his last feature, the indie director’s latest subjects are outcasts in the world of cinema: the last time someone made a memorable movie about gym owners was Dodgeball. Compared to that, Results is Bujalski’s most mainstream effort yet, but remains as awkwardly idiosyncratic as ever.

Guy Pearce stars as Trevor, the man in charge of “Power 4 Life”. What does the “4” stand for? Body, heart, mind, and spirit, he is only too eager to tell his latest client, Danny (Kevin Corrigan). But what becomes increasingly obvious is that the team are far from healthy in almost every department.

Our first clue comes with the introduction of Cobie Smulders’ trainer, Cat, who uses her jogging route to chase down old clients who haven’t paid. She’s focused and determined, but mostly on projecting that image at all times – a facade that crumbles when her clients leave her, or when Danny attempts to woo her.

“I didn’t know you were this angry,” he says to her, taken aback by her rants. “Well, I am!” comes the reply.

Bujalski wrote his characters with his cast in mind and it shows: Kevin Corrigan is fantastic to watch as the idiotic rich man. He has no clue how to spend his money. He can’t even tap his hand in time to music in a bar.

The director treats us to a wonderful montage of him eating pizza on a shrink-wrapped sofa, or offering strangers exorbitant sums to fix his TV remote. When interacting with others, he’s even better, somehow both flustered and cool, confident and insecure. When asked why he wants to sign up to Power 4 Life, he says he wants to be able to take a punch – an aim that he sounds even less sure about than anything else.

Guy Pearce, meanwhile, is clearly having a whale of a time as his boneheaded butch, a man with dreams of owning a slightly bigger gym and achieving the kind of success that a rival German trainer enjoys. He, of course, is just as muddled; while Danny watches videos of Cat doing squats on the Internet, he watches his Dolph Lundgren-like counterpart with equal desire.

The script sits somewhere between rom-com and indie drama, an uneven tone that may frustrate some not prepared for the quirkiness, or surprise those more familiar with Bujalski’s work, which has never contained such well-known stars before. But the messiness is an oddly neat fit for this ensemble, who bring their neuroses to life with the naturalism of Bujalski’s mumblecore origins. They fall in and out of bed and business with each other, behaviour that wouldn’t be out of place next to Computer Chess’ students – a vibe that is accentuated by Danny’s habit of getting high in the evenings. Nothing much happens over the swiftly told 90 minutes, but to them, it feels like a lot does. And that makes for a pleasantly amusing watch.

“Fear, excuses, surrender,” reads a poster on Trevor’s office wall. Then he moves a coat to reveal the word “No” by the side of it. No matter how mainstream his premise, or how old his humans get, Bujalski remains an obliquely entertaining observer of people – and while they may be fit on the outside, inside they remain as perpetually confused as ever.

Results is available on Netflix UK, as part of an £9.99 monthly subscription.

Where can I buy or rent Results online in the UK? 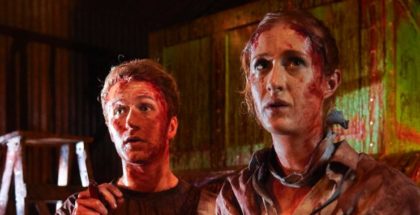