Netflix UK film review: In the Line of Duty | Where to watch online in UK | How to stream legally | When it is available on digital | VODzilla.co

Netflix UK film review: In the Line of Duty 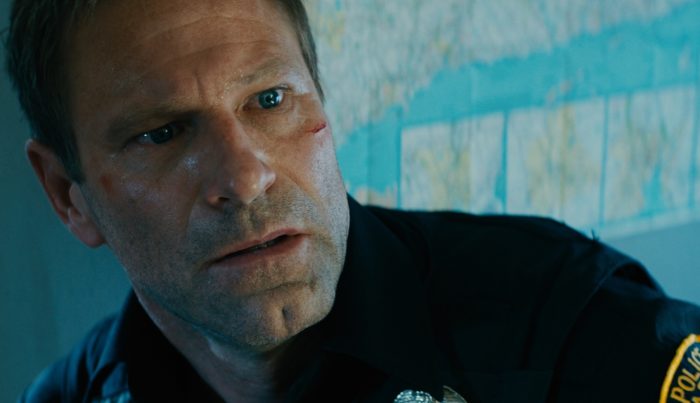 We learn practically everything we need to know about Frank Penny (Aaron Eckhart) in the morning montage that opens Steven C. Miller’s In the Line of Duty. Frank wakes up before his 6 o’clock alarm goes off, and does a routine of exercises on his floor. He picks up the newspaper from the porch, discarding everything but the sports section which he reads over a breakfast of fried eggs. He dresses and arms himself meticulously in the uniform of a police officer, and hesitates before deciding not to put on his wedding band. This is a red-blooded, middle-aged white American male, a loner but also independent, divorced from his wife and probably also from modernity, if not quite reality. Later, more than one character will refer to Frank as a “cowboy”, and that is the kind of passé figure he will cut: a maverick caught in the wrong era, enforcing values that are losing their currency. At a time, after all, when the image of America’s cops – especially Caucasian cops – is probably at its worst, Frank’s unreconstructed attitudes and reputation for shooting first and asking questions later practically ensure that his journey to hero will be a bumpy road.

After this brief prologue, In The Line of Duty will propel Frank not just into the here-and-now of present-day Birmingham, Alabama, but also into a dash against the clock unfolding in real time. For after he makes a split-second, life-or-death call, defensively shooting dead fugitive cop killer Max Keller (James Hutchison III), Frank must race to locate the abducted 11-year-old daughter of Police Chief Tom Volk (Giancarlo Esposito), even as Max’s doubly vengeful brother Dean (Ben McKenzie)) triggers a hose that will, in just over an hour, drown the encased girl. Along the way, Frank reluctantly teams up with young news vlogger Ava Brooks (Courtney Eaton), who webcasts live his escalating encounters with the hyperviolent Dean.

In The Line of Duty epitomises high concept: it comes with a sophisticated plot whose complications are nonetheless presented in such a way that they are always easy to follow, while driving the narrative forwards at a breakneck pace. At its heart, it is a chase movie, but by constantly switching from conventional extradiegetic camerawork (aerials, cranes, two-shot dialogue, etc.) to Ava’s raw (intradiegetic) footage and to a local news station’s edited spin on it, the film varies and diffracts its underlying story, while offering sly commentary on the not-always-straightforward connections between truth and the news, For here we see not only direct forms of reportage, but also different ways in which police actions can be mediated, muddied and misrepresented by journalists in pursuit of hits or views.

In the real world of #BlackLivesMatter and of police behaving badly with seeming impunity, the ultimately positive picture that the film paints of both police and media may strike some viewers as naïve idealism at best and ideologically driven apologism at worst. Even those inclined to buy into the film’s somewhat reactionary ‘cowboy’ politics may take exception, at least on grounds of taste, at the cloying tone of the film’s final scenes in which grown men nod at each other in a circle jerk of moral righteousness.

All this, however, is offset by the verbal sparring between Frank and Ava, whose generational differences and ideological conflicts engender a more satisfyingly messy dialectic that shows off screenwriter Jeremy Drysdale’s cynical wit to hilarious effect. This pair’s path from wary opposition to accommodation and affection is a joy to behold, as their apparently irreconcilable world views are revealed to be unexpectedly aligned, and their respect for each other grows. It is also refreshing to see an evolving on-screen relationship between an older man and a much younger woman that is not even once sexualised.

From his feature debut Automaton Transfusion (2006) and its horror follow-ups The Aggression Scale (2012), Under The Bed (2012) and Silent Night (2012) to his shift into the action/thriller territories of Submerged (2016), Southern Fury (2107) and Escape Plan II (2018). Miller has never been apologetic about his commitment to genre and ‘B’ cinema – and In The Line Of Duty delivers the kind of entertainment that, though somewhat inconsequential, will certainly make a long-haul flight seem shorter or a hard day end with a bang.

Miller has worked several times with actor Bruce Willis (in Extraction, 2015, Marauders, 2016 and First Kill, 2017), so it is unsurprising that his latest film should come with obvious influence from Willis’ Die Hard vehicles – especially from Len Wiseman’s Live Free or Die Hard (2007), with its cross-generational dynamic between dinosaurian and digital values. Perhaps more surprising is the influence of Tarsem Singh’s The Cell (2000), which similarly sees its protagonist racing to prevent an abducted woman from drowning – although Miller and Drysdale have stripped away that film’s more lysergic ideas and imagery, replacing it with a visual aesthetic lifted (expressly) from the first-person-shooter Call of Duty (on which the very title In The Line Of Duty evidently puns). If three of the actors have a Batman connection – Eckhart in The Dark Knight, 2008; Dina Meyer in Birds of Prey, 2002;  McKenzie in Gotham, 2014 – then the film has Esposito’s character Volk utter a key Joker line from The Dark Knight: “Here we go.” Here, however, unlike in Nolan’s film, the thin blue line between good and evil is rather more clearcut.

In The Line Of Duty combines improbable buddy comedy with vicious shoot-outs, bruising punch-ups and overblown pathos, while letting an ageing cowboy loose in the internet age. The results are a riotous real-time ride – albeit just as immediately forgettable.

In the Line of Duty is available on Netflix UK, as part of an £9.99 monthly subscription.

Where can I buy or rent In the Line of Duty online in the UK?