VOD film review: In Secret | VODzilla.co | Where to watch online in UK

With two in-demand actors at the top of their game, this steamy romance is a bodice-ripper in the classic sense: bodices are ripped. And how.

It is approximately 30 minutes until the first bodice is ripped open in secret in In Secret. If the clumsiness of that sentence bothered you, take heed. If you perked up at the words “bodice” and “ripped”, this is a film for you.

Charlie Stratton’s bodice-ripper is a bodice-ripper in the classic sense: bodices are ripped, proper like. The bodice in question belongs to Thérèse Raquin (the always-brilliant Olsen). The man doing the ripping is Laurent (Isaac).

The tearing of said garment comes about after Thérèse, an orphan, is dragged to Paris from the countryside by her makeshift guardian, Madame Raquin (Lange), and forced to marry her pathetic, perpetually ill son, Camille (Felton). Soon, Thérèse finds herself working in a shop by day and tending to her coughing hubby by night. Stratton shoots her life with a depressingly filthy green tinge, zooming in on her face behind the barred window: trapped. Subtle, In Secret is not.

What it is, though, is darkly gripping.

Enter Laurent, Camille’s dashing friend who isn’t sick, doesn’t cough and has an enormous… pair of sideburns. The hirsute, incredibly hot Isaac – fresh from his astonishing turn in Inside LLewyn Davis – smiles through Stratton’s grubby frame, his teeth glinting with devilish charisma. That glint finds Elizabeth Olsen’s eye, and the quiet housewife comes to life. Then they get down to the bodice-ripping business.

How long can they keep their affair hidden? What do they do with Camille? What about Madame Raquin? Events plod along in a fairly predictable fashion, as the supporting cast sink their teeth into the pulpy suspense. Shirley Henderson hams it up as an equally unhappy acquaintance, while Matt Lucas’ blunt mortician delivers some unexpected laughs.

The stage, though, seems positioned for Felton to take the spotlight. Wheezing, smiling and forever combing over his hair, Harry Potter’s Draco Malfoy is unrecognisable as Camille; a testament to both his versatility and the movie’s make-up department. Jessica Lange, meanwhile, strives to match his enjoyable cluelessness with haughty suspicion. But with everyone turned up to 11, there is less time for our lead couple to navigate the thorny morals of their actions without also descending into porky territory. The fact that Stratton renamed Neal Bell’s theatrical text, originally called Thérèse Raquin, is a telling sign.

Fortunately, though, Olsen and Isaac are a potent pairing: their chemistry sparks light into the gloomy corners of Stratton’s Dickensian sets, elevating what could have been uneven, laboured or laughable into a surprisingly engaging tale of romance gone wrong. It even finds its way to a satisfying conclusion, one that conforms to the genre’s formula with a gleefully black finality.

As an adaptation of a play, In Secret is far from a masterpiece. As a chance to see two in-demand actors at the top of their game, it’s an enjoyable costumed outing. Given occasionally on-the-nose dialogue to recite straight-faced, Stratton’s script may be constraining, but the couple have no trouble breaking free. It is approximately 30 minutes until the first bodice is ripped. And they rip it good and proper.

Netflix to ban users from other countries? 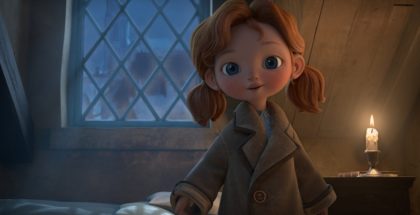