Already seen Episode 3? Read on at the bottom for additional, spoiler-filled comments.

In a game of cat and mouse where the mouse has figured out the traps, rigged them and is sitting by them with a knife and fork, who is really in charge of the game?

Hannibal is, as ever, pulling all the strings (and the tendons) in this particular cat and mouse game – and we’re having quite a job keeping a hold on those strings, if we’re honest – as Will descends further into the inferno to find him and find… what? Betrayal and forgiveness are themes of this week’s episode, with Bedelia now switching back from being out of her depth to being, while not at peace, resigned to surviving in her frightening new scenario by playing therapist. For now, it seems she is safe from moving from Hannibal’s dining table chairs to the table itself, so instrumental is she in listening to his problems. Therapy sessions conducted at pianos and before crackling fires give Hannibal plenty of opportunity to brood over what it really is that he is trying to do to Will and what that, in turn, will lead him to.

Meanwhile, Will is following his own leads, deep in the suitably Gothic grounds of Hannibal’s home, to try and get past the foyer of Hannibal’s so-called “memory palace” (a theme the Mikkelsen brothers are fond of, if Sherlock is anything to go by). The camerawork lovingly lingers over the countryside at twilight (as much of this episode is set at night and in the dark, do not watch during daylight hours for the simple reason that you won’t see anything), adding nature photography to the show’s growing repertoire of masterful camerawork, as Will advances on the mansion, in which he meets another “living victim” of the Hannibal effect. In the wake of last week’s reveal about Abigail, Will is now alone in his search, so perhaps this potential new ally could be just what he needs to track down Il Monstro?

And speaking of old missions, another familiar face returns this week in the joint mission of catching Hannibal by catching Will Graham. The two, tied together by the thread of some invertebrate (insects seem to be a dominant theme this season), are becoming one on a level not seen before; for this familiar face, the fallout of their union could prove catastrophic morally, if nothing else.

A languid episode taking in the various forms that bad memories take, the pace is slow compared to previous seasons. Metaphor is writ large across every piece of sensuous camerawork, from slow-motion scenes of plucking game birds to a beautifully humorous dinner scene, where Hannibal uses a bit of strong-arming to ingratiate himself into Florentine society. Snails crawl lazily yet in a sinister, unstoppable manner over stonework and corpses (harking back to the snails we saw feasting on Abel Gideon a few episodes before), and fireflies provide a suitably hallucinogenic illuminator for the grounds of Hannibal’s childhood home. Are things set to become more illuminated for Will, as he unlocks crucial keys to Hannibal’s past, or should he (and we) be bringing more than one torch for the adventure ahead?

Hannibal Season 3 is available on Netflix UK, as part of an £8.99 monthly subscription.

– I can’t be alone in missing the sheer artistry of the previous kills we used to enjoy with this show, so I’m itching for this part of the series to move into grislier territory. The Florentine setting probably isn’t helping – how will we get Hannibal back on home turf and back where the creative murders formula is allowed to happen?

– Though having said that, the strange yet glorious insect-inspired tribute Will and his new ally, Chiyoh, leave for Hannibal and for Hannibal’s dead sister Mischa is a great entry on the list of surreal, artistic deaths.

– Chiyoh introduces an interesting new dimension to the idea of trauma and forgiveness – that we tell ourselves stories to justify or romanticise bad memories. We’ve come across this theme before, as was quite clear from last week, where Will was literally talking to an imaginary friend to get over said friend’s trauma. So what other stories are we being told here that we shouldn’t believe?

– It’s strongly implied that Hannibal’s behaviour is both a coping mechanism for something in his character and also entirely part of said character, engrained at birth, as opposed to a result of trauma. He arrives at the realisation that, in order to forgive Will, he will have to eat him, literally absorbing the guilt. So if he ate Mischa (as is also heavily implied), what did she do? 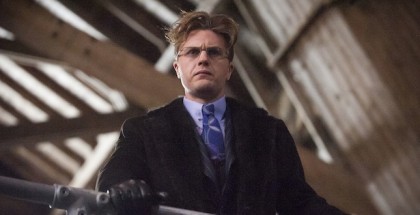