Following an initial six-part series at the beginning of 2017 (one episode of which ended up being shelved, after causing controversy with its casting of Joseph Fiennes as ‪Michael Jackson‬), Urban Myths has now returned with eight new episodes. The comedy-drama anthology series from Sky Arts takes “true…ish stories” from pop culture history and imagines how they might have played out, with episodes falling in a range of places on the scale between fact and fiction.

The first takes as its basis the rumour that, while filming Some Like It Hot, it took Marilyn Monroe (Gemma Arterton) almost 50 attempts to say the line “It’s me, Sugar” and that exasperated director Billy Wilder (James Purefoy) eventually resorted to putting the line on an off-camera chalkboard so she could get it right. This story zips along at a lively pace and manages to pack a lot into just over 20 minutes, including appearances from Monroe’s then husband Arthur Miller (Dougray Scott) and her acting coach, Paula Strasberg (Felicity Montagu), plus her co-stars Tony Curtis (Alex Pettyfer) and Jack Lemmon (Adam Brody). She may get introduced to the sound of sexy saxophone music, but the episode does also allude to the inner sadness of Marilyn, as we see her becoming increasingly drunk throughout the shoot and, after finally managing to deliver her three-word line, losing her smile when she is left alone in her dressing room.

Adding to the ‘anything goes’ vibe of Urban Myths are some unusual casting choices, and in this new batch of episodes, three stories in particular stand out for starring people who are known a lot more for being themselves than for inhabiting characters.

Frank Skinner makes a surprisingly good ‪Johnny Cash‬ in an episode which he also wrote, about the time Cash apparently trashed a hotel room in Nottingham while hallucinating that a violent ostrich was attacking him. This is, for the most part, a two-hander between Skinner as Cash and Isy Suttie as the out-of-her-depth hotel manager trying to placate him, but towards the end, there is also a memorable appearance from Alex Beckett, who unexpectedly passed away earlier this month.

Another out-there bit of casting that pays off is Jack Whitehall as ‪Marc Bolan‬, opposite an excellent Luke Treadaway as ‪David Bowie‬, in an imagining of what happened when the two music legends met for the first time, early on in their careers when they were just Mark Feld and David Jones. According to Bowie, the pair met in the office of their shared manager, played here by Ade Edmonson, when he roped them into whitewashing his walls.

Unfortunately, the casting of Noel Fielding as ‪Alice Cooper‬, in an episode about the glam rocker collaborating with Salvador Dali, doesn’t work nearly as well. He certainly looks the part, but delivers his lines like someone who is delivering lines and ends up paling in comparison to David Suchet as Dali, Sheila Hancock as Dali’s wife and Paul Kaye as Cooper’s manager. Fielding’s performance and the frustrating inscrutability of Dali combine to make this the least satisfying installment of the series.

An episode focusing on Agatha Christie (Anna Maxwell Martin) has a more refreshing feel to it, thanks to it being the only entry in the series set within the first half of the 20th century rather than the second, as well as the only one centred around characters whose voices and mannerisms aren’t familiar to the public. It tells the story of Christie’s mysterious 11-day disappearance in 1929, which resulted in a huge manhunt until she was found hiding out in a hotel with no real explanation as to what happened.

Crime writers Sir Arthur Conan Doyle (Bill Paterson) and Dorothy L Sayers (Rosie Cavaliero) got involved in the case, but it has been said that Conan Doyle was more interested in getting information from ‘the spirit world’ than in finding hard evidence and even tried to enlist the help of a medium. Urban Myths goes one step further with this, imagining Sayers as the voice of reason whose sensible ideas keep getting dismissed by Conan Doyle and the police due to her being both a less famous author and a woman.

The highlight of the series, however, has to be Backstage at Live Aid, which follows ‪Bob Geldof‬ (Jonas Armstrong) around Wembley Stadium on 13th July 1985, as he desperately tries to find someone who’s willing to open the show, battles against sound issues, and comes up against a not-best-pleased ‪Midge Ure‬ (Martin Compston), who asks Geldof if he’s going to fill his 18-minute slot by playing I Don’t Like Mondays four times.

It’s an immensely fun episode and the casting is great all round, including double-act Cardinal Burns as an “off their tits” Status Quo and Rufus Jones as a furious ‪Elton John‬, who storms around delivering lines like “I’m not saying Noel Edmonds is an active Nazi, but I’m not saying he’s not”.

Coming in not far behind this high point are the two final episodes – Public Enemy feat. Kev Wells and The Sex Pistols vs Bill Grundy. The former tells the most recent story of the series, about a time in 2015 when Public Enemy (Paterson Joseph and Abdul Salis) found themselves in desperate need of a ride to a gig in Sheffield Arena, so local man Kev Wells (Philip Glenister) stepped in to give the group a lift in his Ford Focus. Rather like the ‪Johnny Cash‬ episode, humour is mined from ordinary members of the public meeting eccentric celebrities, and some good laughs also come from the portrayal of Flavor Flav as an enthusiastic man-child who Chuck D constantly has to mind.

Meanwhile, the closing episode recalls the appearance of up-and-coming punk band The Sex Pistols on Thames Television’s Today programme, hosted by Bill Grundy (Steve Pemberton), which was such a shambles that complaints came flooding in and Grundy ended up losing his job. Apart from a recreation of the infamous interview, we’re shown the build-up to it (featuring Kayvan Novak as Freddie Mercury) plus some lesser-known details of the aftermath, such as the phone system malfunctioning and diverting calls of complaint to the Green Room… where The Sex Pistols took it upon themselves to start answering them.

Urban Myths Season 1 to 3 is available on Sky On Demand. Don’t have Sky? You can also watch it on NOW TV, which gives live and on-demand streaming access to Sky’s main TV channels, including FOX UK (Legion) and Sky Atlantic (Billions, Westworld), for £7.99 a month – with no contract and a 7-day free trial.

Why you should be watching The Rain on Netflix UK 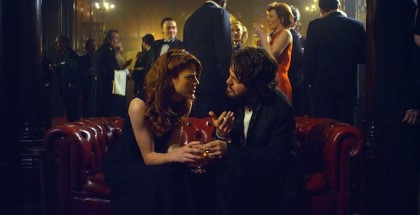