UK TV review: The Walking Dead Season 9, Episode 12 (Guardians) | Where to watch online in UK | How to stream legally | When it is available on digital | VODzilla.co

The Whisperers get scarier and more nonsensical as Season 9 puts its new villains under the microscope.

This is a spoiler-free review of Episode 12 of Season 9. Already seen the episode? Read on for full spoilers following its UK broadcast.

Guardians gives a further insight into the Whisperers’ world, how they live and survive in the wilderness without the need for any walls. They have an interesting governance, based on power, fear and intimidation. If you aren’t happy with a decision, you can challenge it, but you need to be prepared to fight for your belief. At Alexandria, they have a council who vote and discuss topics that could affect them, a far more democratic order of things. At least it would be, if Michonne (Dania Gurira) didn’t use her power to veto everything as a security risk. She may think that she is protecting her community from danger but keeping them sheltered from the other societies may actually be hindering them, keeping them shrouded in ignorance to the wider world. Michonne may feel Alexandria and the Whisperers are opposite poles on a magnet, but really, they have more in common than would first appear.

Negan (Jeffrey Dean Morgan) is back in his cell and he has an interesting proposition for Michonne that has legs to bring the spark back to the community, but Michonne only cares about one thing: security. She isn’t going to let the monster out of his cage and Judith (Cailey Fleming) is the only one who sees that he’s a changed man – and she didn’t even know him when he was the villain. Judith has become the voice of reason at the camp, her big sheriff hat bringing with it the wisdom of its previous owners. As a child of the apocalypse she has grown up with the monsters and she doesn’t see Negan as one of them. There have been a lot of child characters on the show and none of them have been able to carry with them the power and perception that Judith can. The Lil’ Ass-kicker and the Skull-Crusher have an incredible dynamic that needs to be explored more. With yet another Walking Dead spin-off being announced, we can only hope it features these two.

Alas, nothing else at Alexandria provides nearly as much promise and excitement. The cat is out of the bag about Rosita’s (Christian Serratos) pregnancy and the revelation about the paternity of the child hasn’t deterred her line of suitors. This isn’t some rom-com – Rosita Espinosa’s Baby – this is The Walking Dead and, although this will undoubtedly end in disaster for one or more of the parties involved, it’s painful to watch, and not in the good way. Not even Eugene’s (Josh McDermitt) pro and con list with added progression chart can save it. What’s worse is there isn’t any real drama or chemistry between the curious quadruplets – they’re all too nice and just get on with the situation, as if it’s perfectly normal.

Luckily, there is none of this nonsense going on in the Whisperer camp, where the rules are violently strict and with graver consequences. Alpha (Samantha Morton) shows how their group survives and maintains order, while as violent and as threatening as Negan was, there is an openness and opportunity in their camp, you just have to be able to bend with the rules, as Alpha manipulates them. Alpha’s interrogation of Lydia’s (Cassady McClincy) time at the Hilltop is aggressive but her voice is never raised above a whisper, making her own daughter uncomfortable and uneasy, as she is able to send shivers from behind her mask. If Lydia was able to lie so convincingly to the Hilltop to get them to let her go, maybe she’s lying to her mother, too. This leads to a test of Lydia’s loyalty and having already witnessed the brutality within the Whisperers’ camp, it should be inhumane.

The ending, while tense, has an inevitable outcome, but raises certain questions about how the logistics of such an endeavour could actually work. The more we learn about the Whisperers, the more we see how frightening they can be, but if we start dissecting them and their behaviour, there are too many plot holes for them to be convincing. The Whisperers are a threat unlike any we’ve seen before, but logically, they don’t make sense.

– Alpha tests her daughter’s loyalty by demanding that she kills Henry (Matt Lintz), who was caught by Beta (Ryan Hurst) – yes, Beta has arrived, the second in command at the camp as every bit as enormous and intimidating as his comic-book counterpart – as he tracked Lydia from Hilltop. Lydia’s initial hesitation should tell Alpha all she needs to know about what side her daughter is really on, but instead, the moment is eked out to intensify the drama. What follows is a rescue by Daryl (Norman Reedus) and Connie (Lauren Ridloff), who themselves have donned the skins of the dead to infiltrate the Whisperers’ camp. However, they did not walk in alone, they brought the actual undead with them, who are somehow able to shuffle right into the middle of the camp before they decide to start eating people. The Whisperers are supposed to be at one with the dead and yet they flee and scream when their cover is blown

– This has us wondering: how have the Whisperers survived this long alone in the wilderness? In Lydia’s flashback, it was day 43 of the outbreak before things turned nasty inside that bunker – if any of that was true. Since then, it has been the better part of a decade and, as we’ve seen, there are an awful lot of nasty people out there just looking to take advantage of the weak, especially those who don’t hide behind walls. Just how long have they been wearing those skins, which, as proven in the final scene, are just masks to confuse the living. The dead know by the scent who’s a genuine zombie and who’s just faking it to make it and will eat accordingly.

– What is wrong with zombies in this apocalypse? When real walkers find themselves presented with the carcasses of Alpha’s latest victims (from an honestly shocking and gruesome scene), the first one to the meat goes for the bicep and the second goes for the stomach. Are brains no longer a delicacy or even a staple of the diet? Maybe they have de-evolved further and lost their edge? Would this explain their lack of interest with the Whisperers – who only harvest the face skins of the dead? Back in Season 1’s ‘Guts’, the survivors had to literally drench themselves in dead blood and wear intestines as scarfs to walk with the dead and that only lasted minutes. More recently (Season 8’s The Big Scary U), Negan and Gabriel (Seth Gilliam) had to use the same trick, only blood got in Gabriel’s eye and blinded him. All these questions only dilute the intimidation initially presented by the Whisperers.

– Why does Lydia take an old yo-yo and discard the string? Maybe she thinks it can be a weapon or a gift, something to do if she ends up back in a cell at the Hilltop.

– COMIC BOOK SPOILERS. The Rosita baby story arc does play out in the comic books, but without the extra love interests, so we may know where this is heading. However, knowing the show’s stubbornness to have any child in peril (sorry Lizzie – just look at the flowers), it is likely that one of the three men and a baby will end up taking their place in what would have been Rosita’s arc. 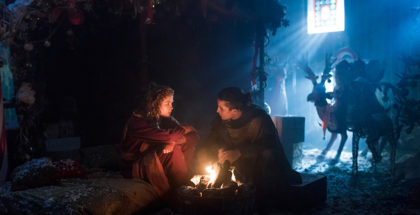