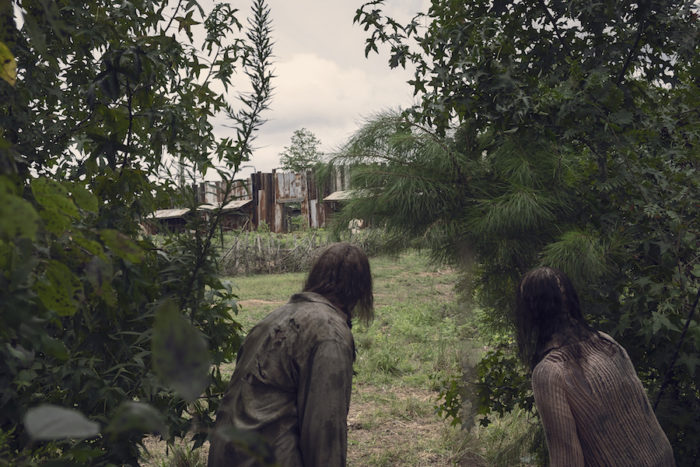 The Whisperer's leader comes into focus in a twisting, changing web of lies and truths.

This is a spoiler-free review of Episode 10 of Season 9. Already seen the episode? Read on for full spoilers following its UK broadcast.

Having introduced us to the general threat of the Whisperers, Omega focuses on their leader, Alpha (Samantha Morton), in a story told through flashbacks by her daughter, Lydia (Cassady McClincy), who is being held prisoner at the Hilltop. The reliability of Lydia’s story is in doubt, considering she has been lying to the community since she arrived and telling different people different versions of the same story. Even though her demeanour with Henry (Matt Lintz) might seem more honest and open, she questions the security of the Hilltop and queries locations of other communities to gain information that Henry seems oblivious to notice.

Lydia speaks of how dangerous her mother is and what she did to survive, to keep them safe. Alpha is someone who has been changed by this world in a way that echoes the path of one of the more common survivors – Carol (Melissa McBride). Although Alpha may not have had the same tragic start, both she and Carol have grown through their experiences into women to fear. Women who would do anything to ensure the survival of themselves, as well as the ones they love, like their children. Over the series, Carol has proven herself to be one of the most fearsome leaders the show has seen – she’s already gone on a fiery rampage to rescue Henry once. If Alpha is even half as dangerous as her, then this is going to be a showdown you won’t want to miss.

That’s assuming things come to blows. One of Lydia’s stories about their group is that if someone got left behind or taken, her people would move on. But Lydia’s own contradictions, and with the living posing as the dead, the Whisperers could be long gone, or they could be merely feet away. The only thing consistent in Lydia’s stories is their inconsistency. The flashbacks appear as confused as Lydia, following variable timelines, her parents each with different appearances and temperaments every time they’re visited. Just whose version of events is Lydia remembering? Her own or one she has come to believe?

Tara (Alanna Masterson) and the new group are out looking for Luke (Dan Fogler) and Alden (Callan McAuliffe), but only find dead horses and walkers, if that’s what they are. Yumiko (Eleanor Matsuura) and the others want to split up and continue the search for their friend, but Tara insists they retreat and regroup behind the safety of the walls. This is one area where the show has changed since losing both Rick and Maggie; the leaders now show more vulnerability than the former Sheriff ever did, needing to think about the best course of action, rather than shooting first and thinking later. Even Daryl (Norman Reedus) has started to show his more tender side since taking on his ward Henry; he may look like he’ll kill you, but he understands Lydia’s abusive past, because it hits close to home. When Daryl was told to deal with her, it’s because he can relate, not to kill her. It’s taken a long time to get to this point, but Daryl is finally starting to be fleshed out as an actual character and not just the loyal, lone wolf.

Lydia would suggest that this indecisiveness – and the walls the community hides behind – is what makes them weak. Her family walk with the dead because they are the one who rule the world now and she thinks that Daryl would make a perfect fit to join them. Over the course of the episode, Lydia’s story twists and changes that it’s almost impossible to distinguish what is the truth, even when the truth is supposedly revealed. Henry thinks he’s found the good in her, but it takes more than surviving a Bush-Tucker Trial to get to the heart of a person. He didn’t even ask her the three questions. The universal truth is this world has changed, and with it, born characters who wouldn’t have surfaced otherwise, dangerous new characters.

As Lydia and Henry talk, she asks him questions about him and his community that she later reveals was an attempt to gain information. She needed this, so she had something worthwhile to tell her people so they would take her back when she escaped. Henry questions, rightly, that Lydia is Alpha’s daughter, would she not take her back willingly? Lydia doesn’t think so, which ends up being another lie – intentional or not – when Alpha and some Whisperers turn up at the Hilltop front gates.

It isn’t entirely clear what the truth about Lydia’s past really is, although it is alluded too that it was never her father who chopped off his beard, it was her mother who cut off her hair. Her father was the weak one, according to Alpha at least, and he wasn’t killed by a walker, but by Alpha sliding a knife into his throat. The stories were told to Lydia, almost brainwashing her to believe that her father was evil and abusive and her mother the saint and the victim, when the reality is it was the other way around.

The subplot throughout the episode looks at Yumiko’s group, who sneak out of the Hilltop to try and find Luke…. in the middle of the night. They quickly realise this isn’t a good idea and head back, only to learn they were never really sneaking out: Tara knew all along. We learn a little more about the group and what they did, but it’s not nearly as interesting as Lydia’s, so it gets a little lost. This will likely be revisited as the search for Luke resumes and if Connie (Lauren Ridloff) – who nips into the corn fields when the Whisperers turn up – gets captured.

Henry is glad that Daryl and his mum are friends. He might be showing just how grateful very soon. With Alpha turning up at the Hilltop and demanding her daughter is returned, Henry might not be too keen to hand her over. They’ve bonded – at least, he thinks they have, sharing truths and holding hands through the prison bars. Depending on which story the Hilltop chooses to believe, although bruises don’t lie, Alpha might not be the abusive leader and mother she has been painted to be. Either way, Henry, as a teenage boy who has met a teenage girl, isn’t going to let her go without a fight, and he’ll need all his family and friends on his side.