UK TV review: Preacher Season 2, Episode 1 and 2 (spoiler-free) | Where to watch online in UK | How to stream legally | When it is available on digital | VODzilla.co

A holy trinity of the fascinating, the hilarious, and the downright disgusting.

It’s safe to say it wouldn’t be a spoiler to announce that Preacher’s second season begins with a car chase. It’s harder to explain exactly why that car chase occurs. The blood-and-lead carnage that follows it, however, makes perfect sense.

In Season 1 of the comic-book adapted, religious, ultra-violent, morality-wrestling, oddly romantic, darkly funny, vampire-and-priest-buddy-comedy (your new favourite genre), Dominic Cooper’s titular preacher, Jesse Custer, inadvertently received the power of Genesis –total control over man – and questioned how to use it. Flanked by his sort-of-ex-girlfriend, Tulip (Ruth Negga, with all of the attitude), and his new friend, Cassidy (Joe Gilgun’s Irish, punk-rock, drug-seeking vampire), Jesse sets out to do good.

While, arguably, he may not have succeeded in that regard, he did attract the attention of some angels, and discover God is missing from Heaven and nowhere to be found, which is less than ideal when you’re a man of the cloth with magical powers and questions to be answered. Season 2 follows this line of thinking, and the madcap trio set out on a road trip to find God – literally.

Of course, that plan is not as easy as it sounds. Thanks to the angel Fiore (or was it DeBlanc?), the team have a lunatic on their tail. Dredged up from the depths of Hell, The Saint of Killers is after them with some serious firepower, which results in a wonderfully soundtracked, blood-heavy nightmarish bonanza that begins the second season.

Episode 1 starts as it means to go on, utterly ridiculous in every way, Preacher continues to be unlike anything ever shown on television before. It matches comically dark violence with the vulgar-yet-mundane (see Cassidy’s ‘foreskin’ rant) and still manages to carry off the meaningful moments when it needs to. Accompanied by a rogue’s gallery of crazy characters, all somehow gloomy and offensive in their own way, the show juxtaposes ideas, moment to moment, and uses a wicked sense of humour as its primary weapon.

With these two episodes combining the best of Preacher – the gross-out butchery and the moments of real emotion, it’s an explosive, intriguing, and adventurous return for AMC’s chaotic drama.

Among all the heroin binges and skull-splattering shootouts, it becomes clear that while Preacher seems to have sprung into existence somewhere between Deadwood and South Park, people had to create this glorious mess. Adapted from work by Garth Ennis & Steve Dillon, co-creators Sam Catlin, Seth Rogen & Evan Goldberg have birthed a show that looks like bedlam, but is actually a brilliant balancing act of the ethical, the nauseating, and the unapologetically stylish. Coupled with a mastery of comic timing, brutal action sequences, and a cast of top-tier young talent, Preacher’s crude style is window dressing on top of a truly impressive production.

Preacher Season 2 is available to watch online in the UK exclusively on Amazon Prime Video, as part of a £5.99 monthly subscription. Episode 1 premieres on Monday 26th June and Episode 2 premieres on Tuesday 27th June, with new episodes then released weekly on Tuesdays, within 24 hours of their US broadcast. 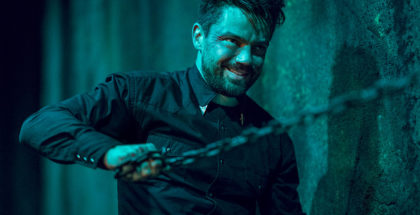